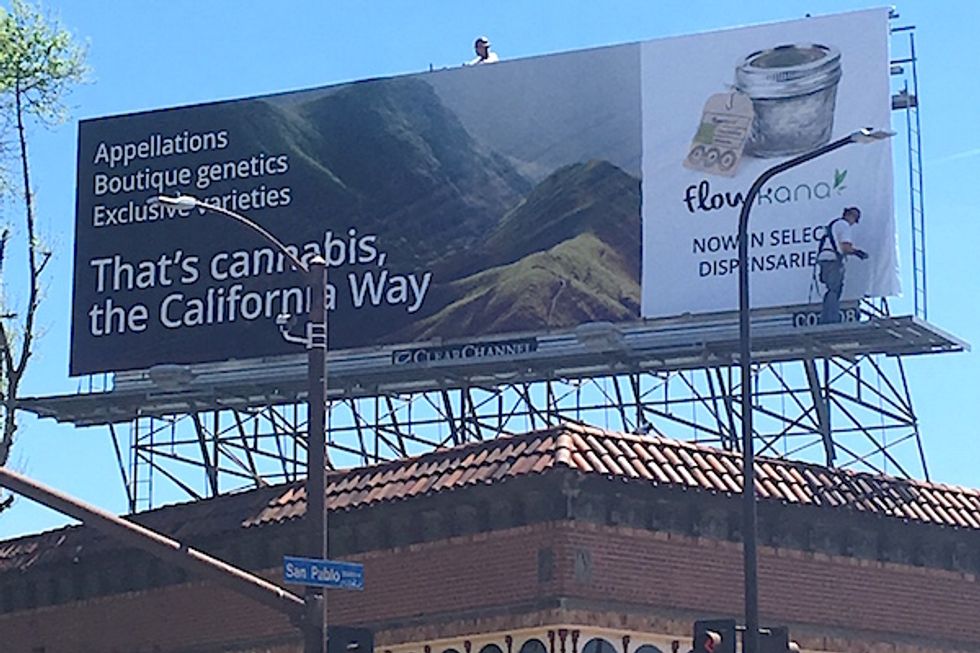 Cannabis Advertising Sprouts up on Bay Area Billboards and Buses

Craft farmers. Small batch. Sustainability. Those aren't just buzzwords for pretty much every restaurant in the 7x7—nope, this is the tagline for the world's first major ad campaign for a cannabis brand, and it has sprouted up on Bay Area billboards today—tomorrow, look for them on Muni buses and in the local media, too.

Flow Kana, the San Francisco cannabis brand that sources only sustainably grown small-batch boutique marijuana strains from independent farmers in the Emerald Triangle, is behind this week's launch of the landmark campaign that they expect to generate 15 million impressions with ads on 75 SF Muni bus exteriors, inside 200 SF buses, and billboards and bus shelters all over Oakland and Berkeley. But getting eyeballs on its fluffy buds just in time for 4/20 isn't the only reason Flow Kana is pushing the limits of advertising.

Called The California Way, his company's campaign seeks to bring awareness to the tens of thousands of California people, families, and collectives who comprise our state's cannabis industry, which up to now, has been run by small farmers and independent entrepreneurs, most of whom feel an actual responsibility to the care of our land and produce high-quality pot. But with legalization looming, Steinmetz worries that the values of the industry—the largest cannabis industry in the world—are in danger of being trampled upon by big corporations and cheaper methods of production that could pose a hazard to our environment and our health.

Artisanal, organic, and small batch product may seem par for the course in San Francisco, where we pay meticulous attention to the process of making our food. So why would cannabis be any different? Well, according to Steinmetz, if California follows the lead of states that have already legalized recreational marijuana use—Colorado, Washington, and Oregon—we risk going the way of vertical integration and massive commercial grows that edge out smaller players in the field, threatening the agricultural values and farmer ecosystem that make California's ganja so legendary.

As San Francisco gets ready to celebrate what is likely the last 4/20 under prohibition, Steinmetz wants to make sure there's not just smoke in the air, but also sense of pride in the California Way of doing things.

Put that in your pipe and smoke it.