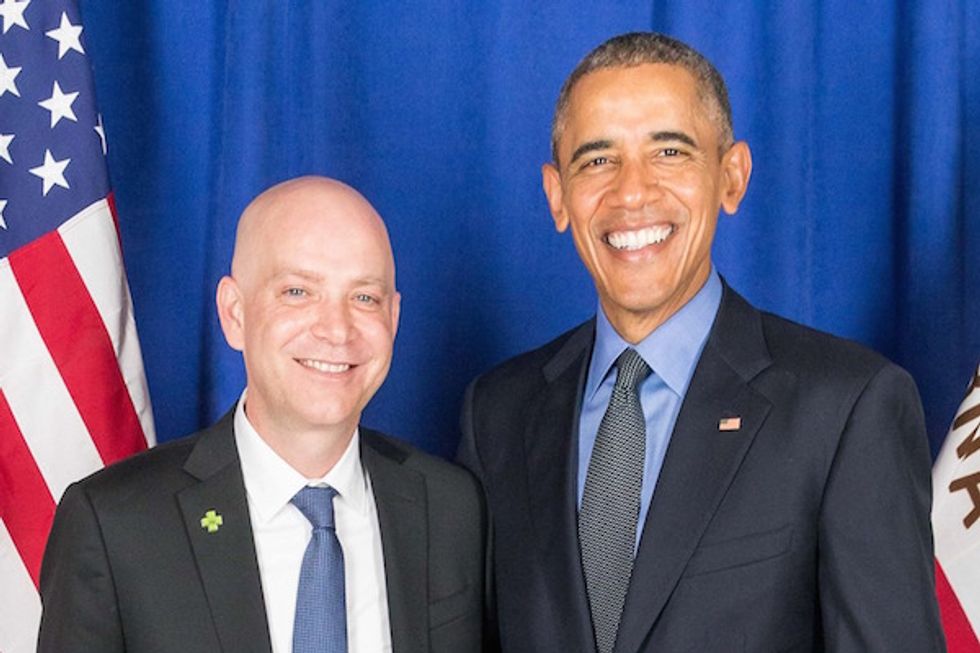 A local marijuana reporter's field notes and gossip from the intersection of pot, money, and power in the epicentral San Francisco Bay Area.

San Francisco's The Green Cross dispensary founder Kevin Reed was spotted posing with the Leader of the Free World this month in what has to be a global first for cannabis dispensary-government relations.

Followers of Reed on social media presence noticed inn February when he posted “Off to meet POTUS." Then, on March 2: “Here are pictures from meeting President Obama last month!"

The February 11 event was a private fundraiser for the DNC at a residence in Atherton. Everyone who meets the President has their belongings and persons screened by the president's security detail.

“I wasn't sure if I'd be able to get away with wearing my Green Cross lapel pin in the pictures, but sure enough, the Secret Service allowed it," Reed wrote.

“After asking him to consider rescheduling medical cannabis before leaving office, he replied, 'Oh yeah, I saw your pin!' What a wonderful and memorable moment. Let's hope he actually does it!"

President Obama has said he'd sign a bill from Congress to change cannabis' scheduling, but he said the White House has bigger 2016 priorities, including broader criminal justice system reforms.

The meeting caps a string of official wins for the longtime Excelsior neighborhood dispensary, which began as a licensed delivery service and now serves hundreds of patients per day in its location at 4218 Mission Street.

Kevin Reed continues to make tracks. On March 5, he was spotted at the Castro Theatre for Fiona Ma's birthday, and on March 24, he mentioned a meeting democratic presidential frontrunner Hillary Clinton and Congresswoman Jackie Speier.

Ever the Southern gentleman, Reed writes that he played it cool with the former Secretary.

“Upon meeting Secretary Clinton I said, 'It would be amazing if, when you arrive in office, you'd consider decriminalizing cannabis.' She gazed down at my Green Cross lapel pin and replied, 'I will look into that.'"

Sec. Clinton has promised, if elected, to downgrade cannabis from its place atop the government's widely derided official list of dangerous drugs, and move it into second place. Rival Bernie Sanders has promised to federally de-schedule pot and let states set policy.

Cannabis science and culture are on a collision course as legalization unleashes existing technology on the once-maligned herb.

Case in point: Weed biotech startup Librede, based in San Diego, plans on growing THC and other cannabis derivatives in a laboratory, resulting in a 90 percent cost reduction.

The idea was a hit with investors at the last major cannabis-tech investor pitch in SF, even though marijuana purists in the crowd booed in unison.

Weed Club's @420 Pitch on March 3rd pitted 10 cannabis companies, each seeking investment, against one another in an open-to-the public spectacle at an investor summit in the Hilton Union Square. Hundreds of people listened to presentations for credit card-sized vapes, apps, luxury handbags, and weed gum, but it was Librede's plan to genetically modify yeast to make pot compounds at a fraction of the cost of growing the plant that seemed most sound to the money men. Librede won the event, much to the dismay of cannabis purists in the crowd. On March 22, the biotech firm also won a $221,000 US government grant to advance its technology—a development that could radically undercut every cannabis grower on the planet.

“Cannabinoid production in yeast looks a lot like a micro-brewery," Librede states. “There is very little land, water and power use; no fertilizers or pesticides; and production is done under highly controlled/sterile conditions. This creates a better product in terms of yield, purity and consistency at 10 percent of the cost. The potential for our technology is enormous."

About $215 million in venture capital flowed into the cannabis space last year, CB Insights reports. This February, SF-based Ackrell Capital predicted the legal cannabis industry will grow to $100 billion by 2029.

The Seattle-based brand was launched in January 2016 by April Pride, “a serial entrepreneur with a Masters from Parsons and a degree from University of Virginia's School of Architecture."

(East Bay–based Om Edibles adds a mushroom and miso broth to its offering of award-winning CBD-rich edibles. Photo via Instagram)

Om Edibles' CBD-rich mushroom and miso soup broth is on award watch. The East Bay company has won a string of awards for their past creations, and this soup broth, with 10mg of CBD per tablespoon, is the hottest and latest. Om racks up the accolades by growing their own cannabinoids, sourcing the finest ingredients, and keeping it simple—the broth, for instance, is made up of organic ACDC cannabis; organic mellow white miso; 14 types of organic mushrooms including reishi, shiitake, and chaga; and sea kelp. It's probiotic, nutrient-dense and “designed for people who may not have much of an appetite and might only eat one to two bites of food a day."

Om recently won back-to-back first-place prizes for their CBD Raw Sipping Cacao (High Times NorCal Cup 2015)—we picked up a jar from Harvest on Geary Street and it was love at first sip—and for their topical Holy Anointing Oil (World Cannabis Cup, 2015, Jamaica). You might also try their medicated bath seltzers.

Spring is here and with it some epic surf sessions, beachside barbecues and C.R.A.F.T.Pineapple Headband, available for delivery to select parts of the Bay Area.