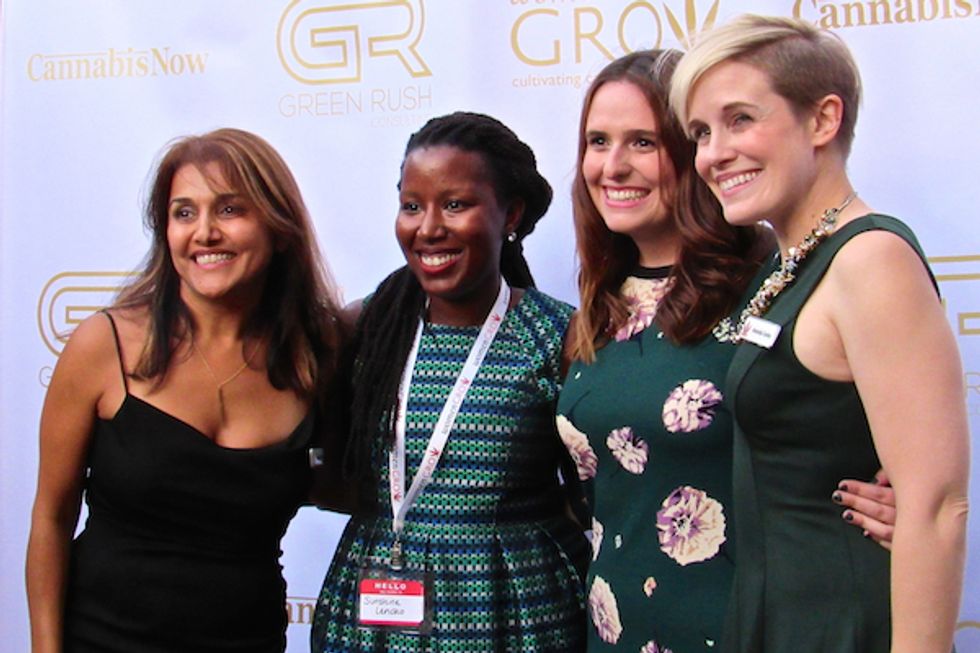 When local ladies who toke recently got together to party, they left all traces of earth-motherhood to the previous generation of smokers. Gone are the flowing dresses and patchouli-scented armpit hair. At Women Grow Bay Area's1st Anniversary Gala, held at The Chapel on October 1, it was all slinky dresses, strappy heels, fierce pixie haircuts, and red lipstick. The only callout to pot's hippie roots on this red carpet (yes, there was one) was a single hemp headband, a number of green dresses, and the occasional pre-roll joint.

Speakers at the gala included Moriah Barnhart, founder and CEO of Florida-based CannaMoms, a group of mothers advocating for the right to use cannabis as a treatment for their critically ill kids. Barnhart had treated her daughter's intractable brain cancer with cannabis. “When our doctor saw the results, she left St. Jude's to head up cannabis research at a university in Georgia," she said.

Women are the key to cannabis legalization and normalization, according to Julianna Carella, founder and CEO of San Francisco-based edibles company Auntie Dolores, whose line of treats includes everything from vegan chili lime peanuts to low-glycemic CBD-only brownies. Carella launched her brand in 2008 as a way to both treat her incurable migraines and to raise money for her 14-year-old daughter's college fund.

“The cannabis plant has appointed women, mostly, as the stewards of health freedom," Carella said in her address to the crowd. “Women make most of the decisions around health for their families, and just have that proactive approach to health," she said, also noting that women tend to suffer from institutionalized medical bias—they are five times more likely to be prescribed anti-depressants and anti-anxiety medications than men. “So, for all women out there who maybe have not tried cannabis as an anti-depressant, this is news: It's effective. Try it. You may not like THC, but there's CBD and all these other cannabinoids to choose from. This is a big deal. Health freedom is what it's all about."

Carella implored the women of cannabis to seize the day: According to a survey by Marijuana Business Daily, published this October, women currently occupy 36 percent of leadership roles in the marijuana industry—a figure that far exceeds their representation in Fortune 500 companies or Congress. “Where else are we going to have the opportunity to see history unfold this way?" Carella asked. “What other industry gives you everything this industry gives us women? [These] opportunities…may never present themselves again in history. I just invite all of you to embrace it."

Women Grow will hold its national leadership summit in Denver, February 3-6, 2016. More than 2,000 are expected. In the meantime, the next Bay Area meetup is scheduled for Nov. 5.

(No more earth mammas: It was all very modern at Women Grow's 1st anniversary party.)

The natty, hard-to-love Bernal Heights Cooperative is under new management by a team of highly connected Northern California growers going by the name BHC. The retail experience is still very college-dorm-like, but the dispensary has some remarkable throwback strains including Mr. White and White Rhino, plus solid SFV OG and Cookies. Interestingly, staff said the club is testing their flowers and hash through the San Francisco Medical Examiner's Office. The city's coroner, reportedly, wants to expand SF's weed testing capabilities, and is interested in more pot data, staff said.