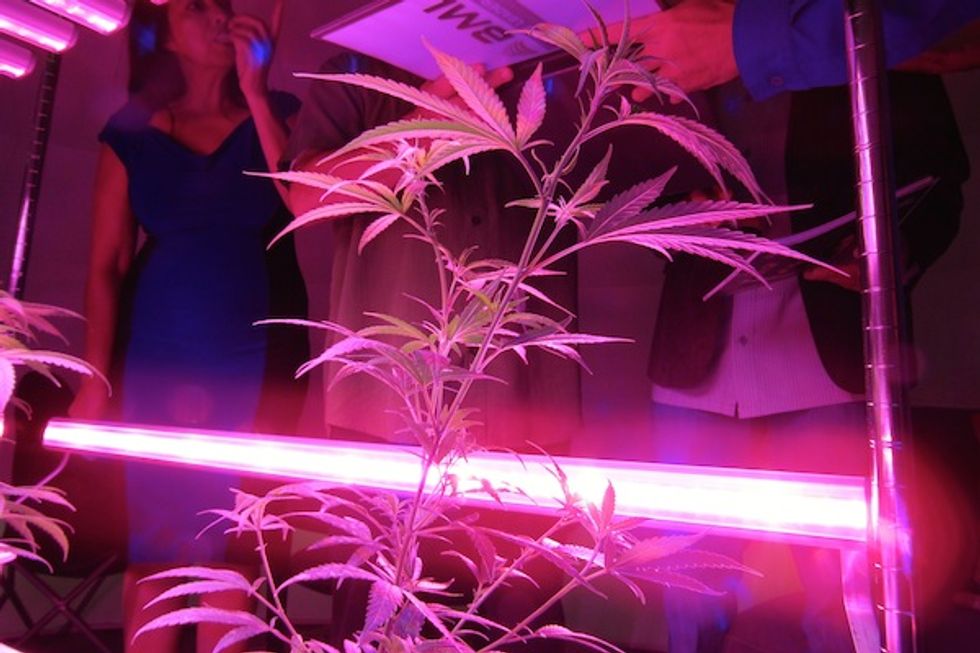 Up on the fourth floor of 1355 Market Street, in a screened-off section of the startup incubator Runway, I smelled pot once, but only for a second. Folks were chanting “Equals! Not outlaws!" in between bites of Thai tacos from Trilogi SF and sips of complimentary DeLoach white wine. It was kind of comforting, in this brave new world, to see technologists and former outlaws cross-pollinating.

It was just after 5pm on a Thursday in mid-September. Several hundred professionals from the Bay Area's two hottest sectors, tech and cannabis, were gathering for the @420 Pitch—a Shark Tank-like contest sponsored by WeedClub, which dubs itself “a professional network for cannabis."

Tech and cannabis industry dress codes certainly intersect—the uniform was an untucked, long-sleeved, button-down shirt draped over designer blue jeans, with a mishmash of New Balances, Vans, and boat shoes. More rare, was the full suit or cocktail dress, or an actual pot farmer in a faded T-shirt and natty goatee.

“They're very curious," says WeedClub founder Evan Horowitz, bounding from booth to booth. “We're trying to turn on their switch."

“This is real disruption right here," said Matthew Callahan of Botanix Pharma, a five-man company out of Philadelphia that was seeking “less than $20 million" to get its prescription acne cream, based on the weed molecule cannabidiol, FDA-approved and into stores in the next 48 months. A Runway board member introduced Callahan to WeedClub, and he flew out to pitch.

“You're seeing professional people coming in and starting to build businesses," he said.

Also among the businesses represented here was Evoke, a crowdfunded vaporizer created by a team of retired aerospace engineers and investors from Electronic Arts. Two of its core founders, both from Mountain View, met at baby sign language classes. Evoke has $400,000 on hand thanks to crowdfunding, and was seeking $600,000 more to make a run of 5,000 iPhone-operated electronic pipes. Each Evoke comes with replaceable cartridges for flowers, oils, or waxes—think of it as the disposable K-cup of vaping.

After an hour of mingling over spinach wontons and Anchor Steams, the show began. Horowitz hyped the crowd on the event's early results. The first @420 Pitch, back in May, had resulted in millions of dollars in funding for one contestant, Harvest, a company that buys out underperforming dispensaries. Another company, SericaPay, got picked up by the famous tech incubator Y Combinator.

Looking down from WeedClub onto the intersection of Market and 10th, the mid-Market revival seemed complete and new age had definitely dawned. Smiling girls in Google hoodies blissfully watched their iPhones as they strolled past the chic new Bon Marche. Shiny new office buildings twinkled in the dusk.

The City of San Francisco is currently taking applications for its first-ever Cannabis State Legalization Taskforce, spearheaded by SF Supervisor Scott Weiner. There's no deadline to apply, but the Board will seat the taskforce this fall. Want to apply?

Hot Strain of the Month

CBD OG, a very pungent, anxiety-free flower, is one of the very best medicines coming from the award-winning Berkeley growers at CRAFT, a delivery-only collective that does weekend drops for San Francisco patients. Up until recently, CBD-rich flowers were rare, and if available, they tasted mediocre. This year, CBD-rich strains became just as tasty as their THC peers. CBD OG has the classic lemon, pine, fuel stink of quality OG Kush, but it has a whopping 18 percent CBD (to 6 percent THC), making it far less spacey and racey.

We have a patch for birth control. A patch for tobacco cessation. And now, get ready for the pot patch. Mary's Medicinals Transdermal Patch is a two-by-two-inch square that delivers a single 10mg dose of CBD, CBN, or THCa, or a 1:1 mix of CBD:THC. To amp up the euphoria factor, Mary's now offers 20mg patches of THC indica or sativa.

PAX, the San Francisco company and market leader in luxury vaporizers whose offices are located one floor below Burning Man HQ in the Mission, is going global. The company raised $46.7 million in Series C funding this spring, and announced on September 16 its expansion into the UK and Germany both online and via local retailers.