The Grateful Dead held a press conference in SF over their arrest for possession of marijuana in Oct. 1967. (Courtesy of CNN)

Mark Twain, The Grateful Dead, and Thee Oh Sees hail from three very different centuries. But these artists share something in common besides their San Francisco provenance: They could (or can) all easily buy marijuana in SF. Two of the three could do so legally.

When Twain arrived in the city in the 1860s, San Francisco newspapers carried advertisements for hasheesh candies, sold over the counter at pharmacies on Montgomery Street. By the time Thee Oh Sees formed a decade ago, there were city-licensed medical cannabis dispensaries (some selling knock-you-on-your ass-strength hash candies) all over town. Only the Dead, pioneers of the San Francisco sound during the Summer of Love 50 years ago, had the ill fortune of existing during the 20th Century intermezzo when cannabis was outright illegal. But even then, weed was easier to find in town than a fast-food drive-thru. 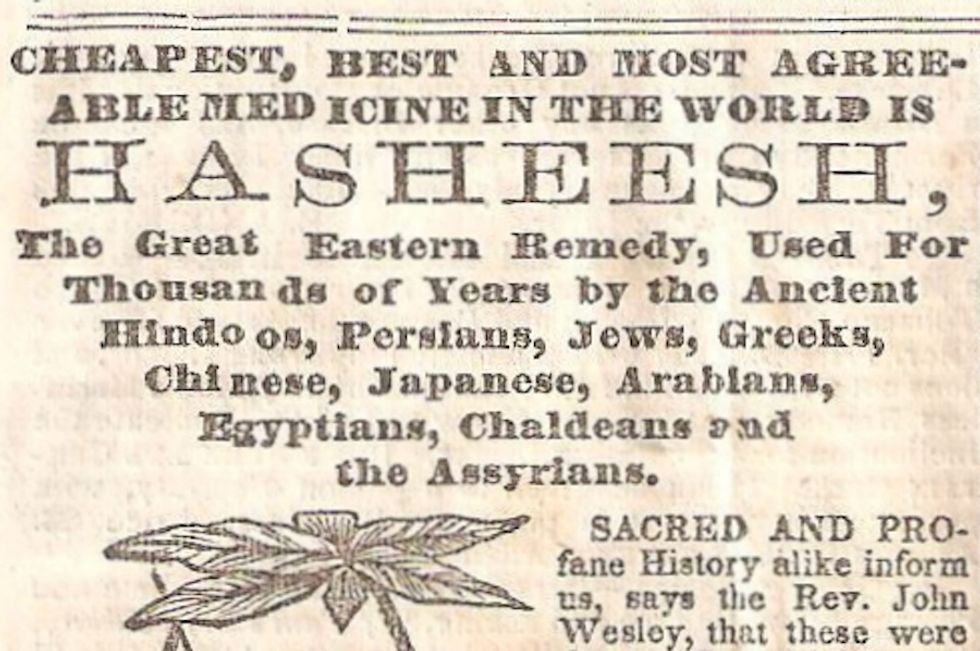 Advertisements for hasheesh candy, like this one from The Good Samaritan and Domestic Physician, were quite common in newspapers the 1860s and 1870s. (Courtesy of cannabisculture.com) 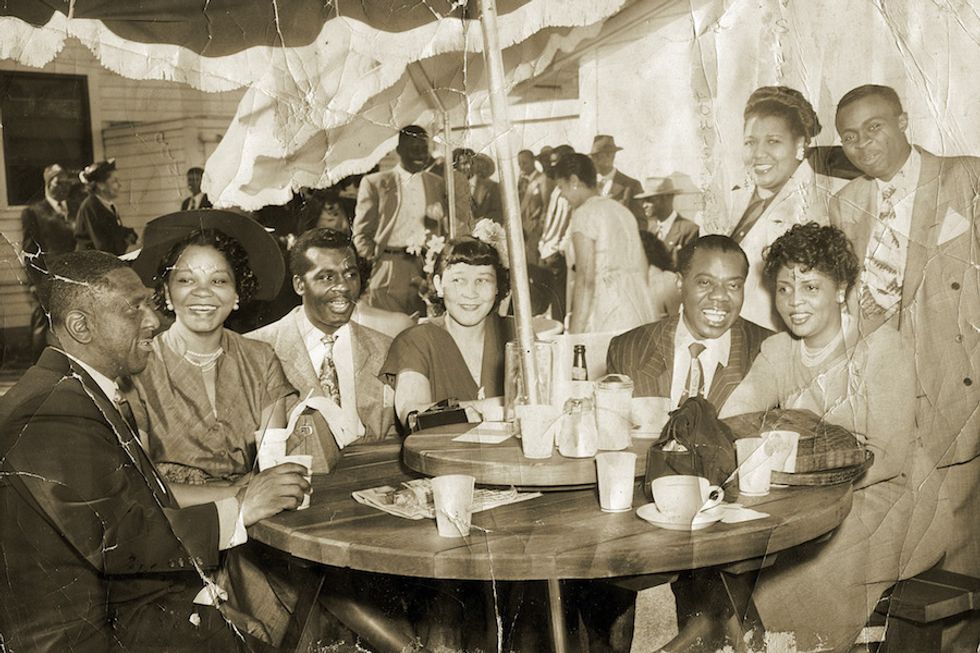 Once known as the Harlem of the West, San Francisco's Fillmore Street was a home away from home for jazz musicians including Louis Armstrong (seated, second from right), who was well known to enjoy the reefer. Armstrong is pictured here at a party in the Fillmore in the 1940s. (Courtesy of the Hall Family) 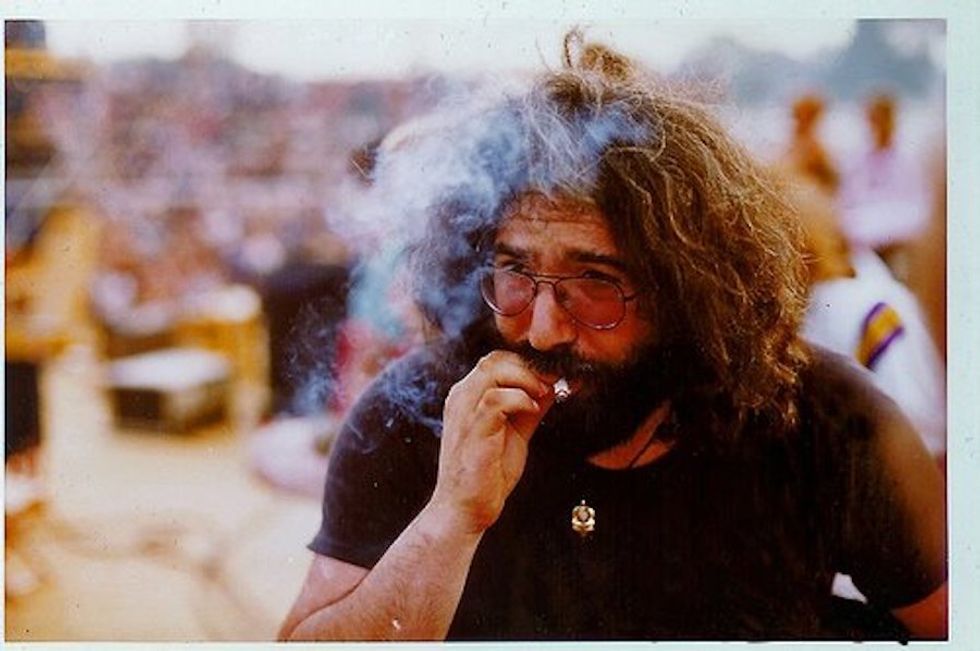 When Jerry Garcia and the Grateful Dead called Haight-Ashbury home, the weed was flowing, however illegally, in San Francisco. 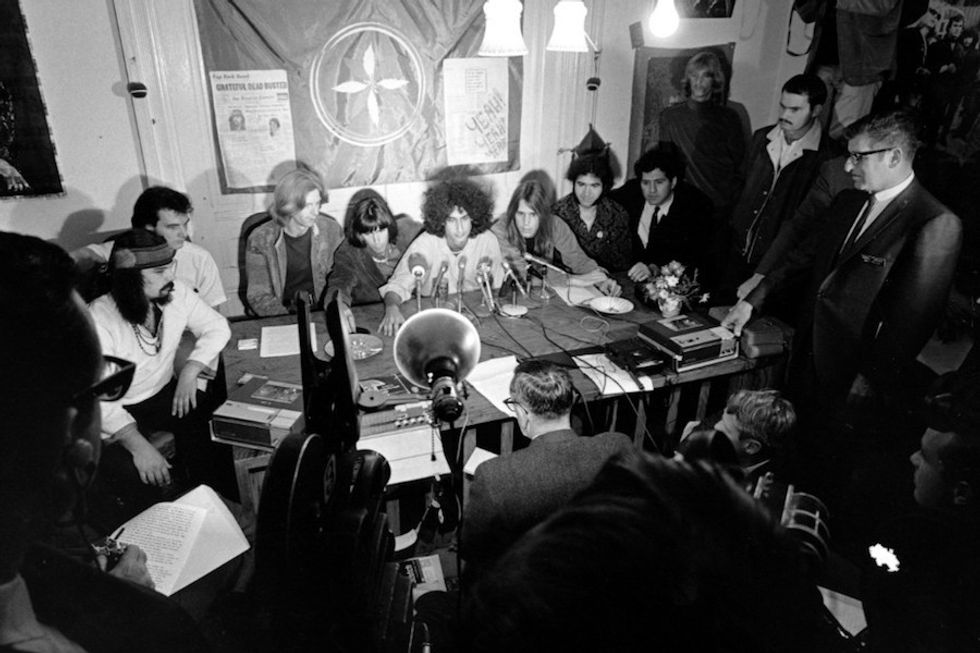 In October 1967, the Grateful Dead held a press conference in their San Francisco home in protest of their recent arrest for possession of marijuana. (Courtesy of CNN) 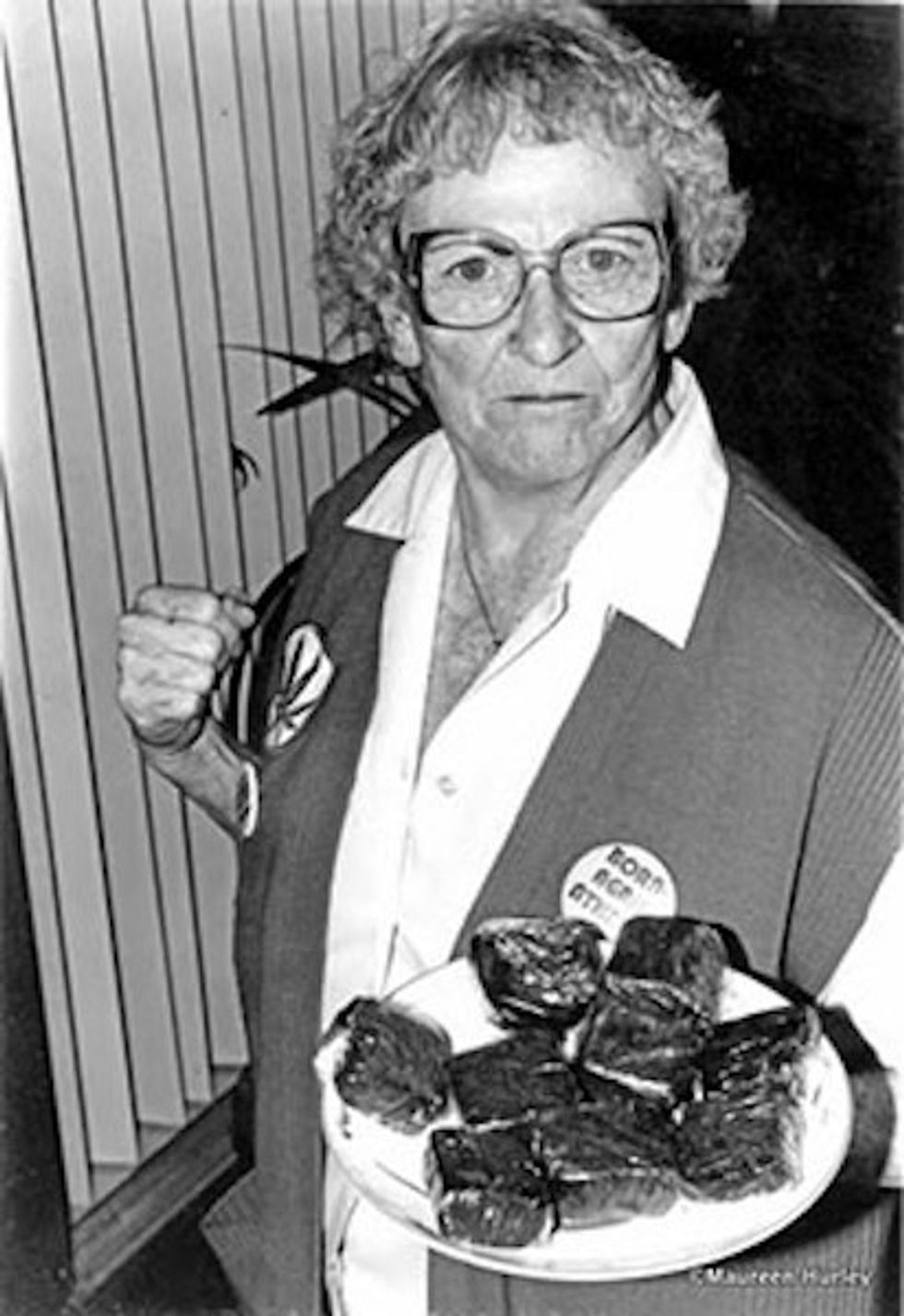 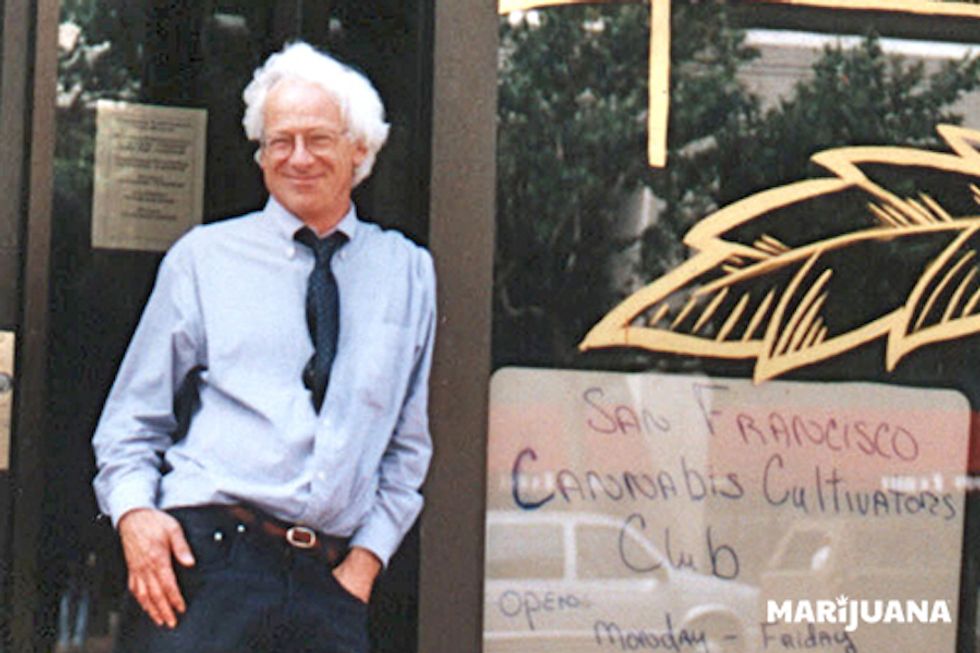 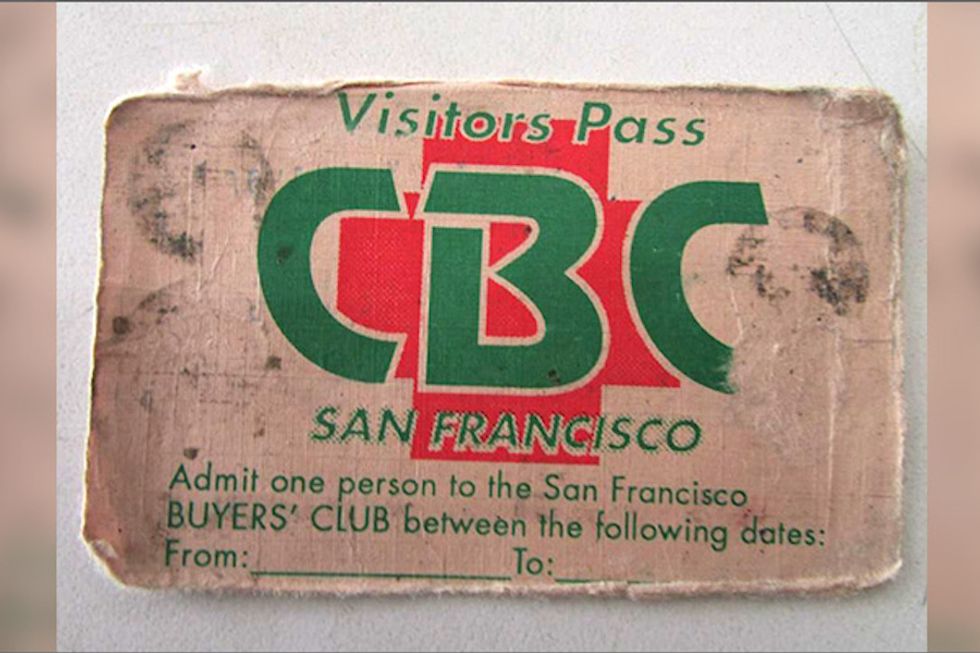 Proposition 64 passed in California in November 2016, legalizing the recreational use of marijuana in California. Prop 64 is expected to go into effect in January 2018. (Courtesy of Friends of Prop 64) 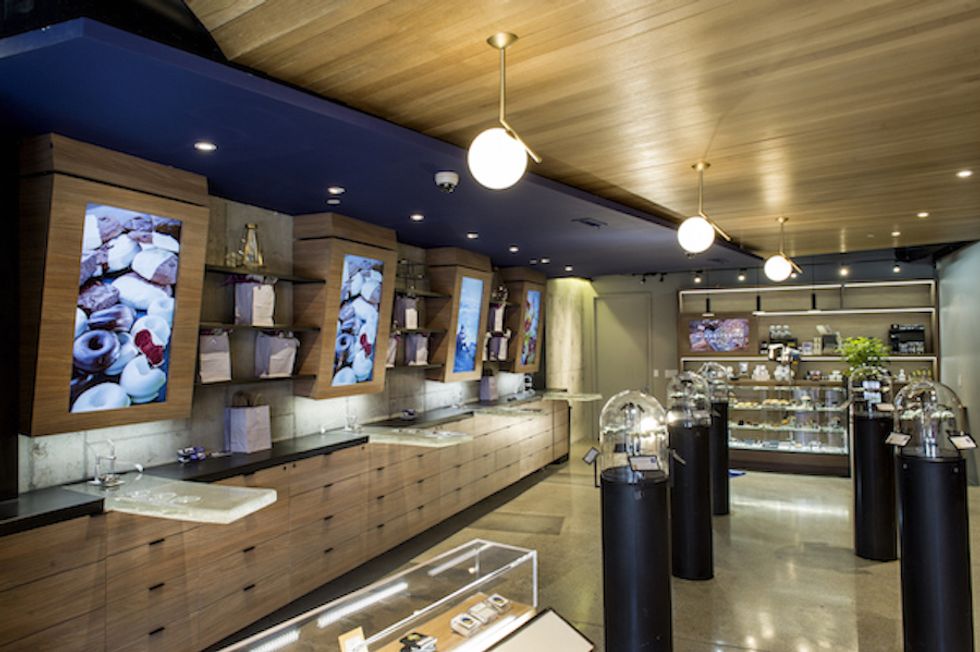 SF has always been a port town and a boom town: Here, people and goods and contraband and ideas from all over the world meet and coalesce. And whether in candies gobbled by writers, Civil War veterans, and railroad barons, or in "reefers" tucked away in the instrument cases of jazz musicians playing in long-vanished clubs on Fillmore Street, marijuana has been here for almost two centuries.

Few other tonics of life cross lines of culture and class so easily—perhaps only staples like alcohol and caffeine are as indispensable. Black and white, rich and poor, San Franciscans like weed, and we've always been very San Francisco about it. Even before we were able to walk into an art-directed cannabis storefront and browse venture-capital-backed cannabis brands, San Franciscans were weed snobs.

So how did we get here?

On Friday in the Castro, escaping the cold and soggy afternoon outside, a few dozen people huddled under the corrugated tin roof at Cafe Flore doing what they've done here for more than 40 years—smoking weed. They were celebrating the lifetime achievements of one of the city's leading cannabis advocates: 70-year-old Dennis Peron. It was here in 1973 that Peron, a gay Vietnam veteran, met Mary Rathbun, a divorced single mother who was waiting tables at IHOP. The unlikely pair bonded over a joint (which had just recently been outlawed by Richard Nixon's Controlled Substances Act) and, as journalist Martin A. Lee wrote in Smoke Signals, the definitive social history of marijuana in the United States, their joining led directly to marijuana prohibition's undoing.

San Francisco became the nexus of 1960s counterculture because it was a portal, the point of entry and exit for soldiers on their way to or from Southeast Asia. The marginalized and the ostracized also found a home here. There were more outcasts, freaks, and queers here than anywhere else in the U.S.. When Peron arrived back to the States from Vietnam with two pounds of Thai weed in his duffle bag, SF was the perfect place to settle down and set up shop. Nobody can agree on exactly when the first marijuana merchant started operating out of a storefront in the city, but what became known as "The Big Top"—a barely clandestine marijuana emporium located above a health food cafe, which Harvey Milk briefly used as a campaign headquarters in the mid-'70s—was one of the first and possibly the least underground of the "underground" dispensaries to spring up a generation ago. These dispensaries, and the cannabis advocates who ran them, would become pivotal caretakers to SF's LGBT community as the HIV/AIDS epidemic took hold here.

In the early 1980s, even as President Ronald Reagan denied the existence of AIDS and baffled health experts struggled to find a cause and a cure, marijuana was one of the few substances that did anything to help AIDS-related wasting syndrome. Mary Rathbun, who volunteered at San Francisco General Hospital—the first American hospital to open a dedicated AIDS ward, in 1983—patrolled Ward 5B handing out tens of thousands of brownies baked with Peron's weed. Famously, she became known as Brownie Mary—the two even published a cookbook. Peron, whose lover died of AIDS, had reprised The Big Top with the aim of public health: His San Francisco Cannabis Buyers' Club, opened in a loft at 194 Church Street in 1992, was the first American medical marijuana dispensary.

And so it was, in the 1990s, that 20th Century Americans began to buy the notion known to Western physicians since the age of Queen Victoria: Weed is medicine. From here, it was a rapid and natural progression to the realization that adults should be able to enjoy marijuana in peace, like they always have, no matter what the law said.

Peron now lives in a world he practically doesn't recognize—he didn't support Proposition 64 (the California state measure that legalized the recreational use of marijuana in November 2016) because he believes weed has become too commercialized. Billboards, newspapers, and Instagram are full of advertisements for vape pens and Whole Foods–quality craft cannabis, all of which will be readily available to every Californian over the age of 21 come 2018. But the pioneering advocate has late-stage lung cancer and doesn't expect to live that long. "The doctors said, 'Make it the best year of your life,'" Peron's brother, Brian, told us on Friday.

A few days before, on Valentine's Day, the Board of Supervisors had given Peron an official certificate of honor; the party Friday at Cafe Flore was organized in his honor by the restaurant's new owners. One, Terrance Alan, is a former nightclub owner, party promoter, pornographer, and now chairman of a city-commissioned task force charged with incorporating recreational cannabis into San Francisco's fabric. If Alan has his way, Flore, as it will soon be renamed, will become the first business in town to sell food, coffee, alcohol, and cannabis with a city imprimatur. We think Mark Twain would have approved.

This article is presented by our friends at Medithrive.