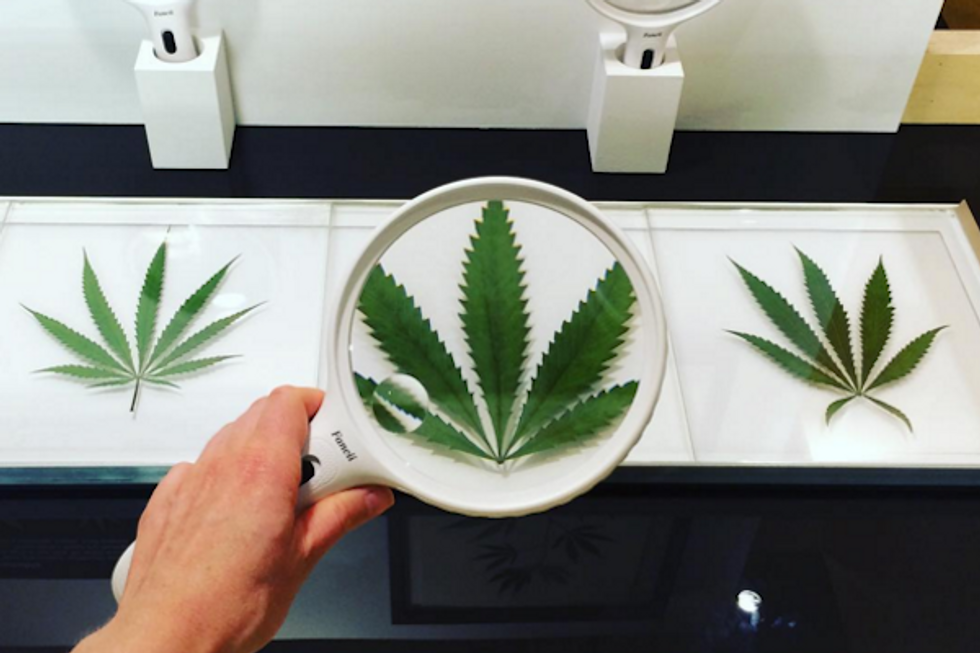 Bay Area residents can fork over admission to Altered State — the controversy-courting, massive new museum exhibition on marijuana at the Oakland Museum of California.

Here are our four favorite parts from the new exhibit.

OMCA pivots hard from staid museum-fair into a red-hot civic platform of ideas with Altered State, starting with the 'alien case' — a large, sealed glass enclosure containing live pot plants. The flowering females come from Dark Heart Nursery, and bloom inside the self-contained box, which has its own lights, nutrients, and an air scrubber. No odor is noticeable. Biohazard-like glove ports allow you to manipulate the leaves and bud.

It's a wry way to highlight cannabis' federally illegal, “schedule 1" status — making it technically as dangerous as heroin. With domestic support at 61% for weed legalization, a full-scale museum exhibition replete with actual cannabis plants is long overdue.

(Museum staff fashioned this apple bong for the exhibit; photo by David Downs)

Altered State took a year to develop by seven OMCA team members, at a cost of a half-million dollars. It covers 3,700-square-feet of exhibit space just across the hallway from the OMCA's ticket kiosk.

It feels like a museum exhibit — complete with the museum tropes: the wide hallways, blown-up pictures with quotes on the wall, explanatory placards next to installations, and key objects behind glass. Except this museum exhibit feels partly inspired by a college dorm room, and partly by Oakland's rich art installation culture.

There's a high-school D.A.R.E. sweatshirt that's going to take some people back. There's an apple bong behind a glass case. Museum staff fashioned it, along with a pipe made out of Coke can.

“We had a lot of fun with this one. We mixed the high and low a lot here," said Sarah Seiter, associate curator of Natural Sciences, and exhibition curator making her directorial debut in the Great Hall.

“Our preparators had a great time making an apple bong and the coke can bong. One of our researchers who went to high school in the '80s, really insisted we get the New Coke can, for maximum authenticity to reflect her experience, so we eBayed that. I don't think it was terribly expensive — the customization was done in-house, though."

(Read others' private confessions about pot and write one of your own in the Confessions Booth; photo by David Downs)

But it's the interactive art installations, focusing on medicine, the recreational vote, creativity, youth, police, and personal stories that really shine.

Opportunities abound to directly engage with the topic: you can draw high (or sober); confess something about cannabis; detail a police encounter; chill out in a sensory alteration exhibit; tune in to spiritualists talking pot; decorate political lawn signs; and listen to patients tell their stories.

“We wanted to do a more conceptual approach than a collections approach," Seiter said. “It's more about issues and ideas, than emphasizing our collection in this exhibit."

Most gripping is the Confession Booth, where you can read others' private confessions about pot, and write one of your own.

“I grew up with my father taking bong hits in front of me. Didn't know what it was until recently. It didn't make him any less of a great father," reads one.

“My confession: The worst lovers are stoners," reads another.

“Weed has gotten too strong! It was more fun when 1 puff didn't render me stoopid."

“My confession: I struggle to imagine sex without marijuana."

4) Office Hours and Other Events

In the "Politically Loaded" section, a desk is available where guests can leave notes for experts from NORML and the ACLU, who answer cannabis questions during live office hours throughout the show's run.