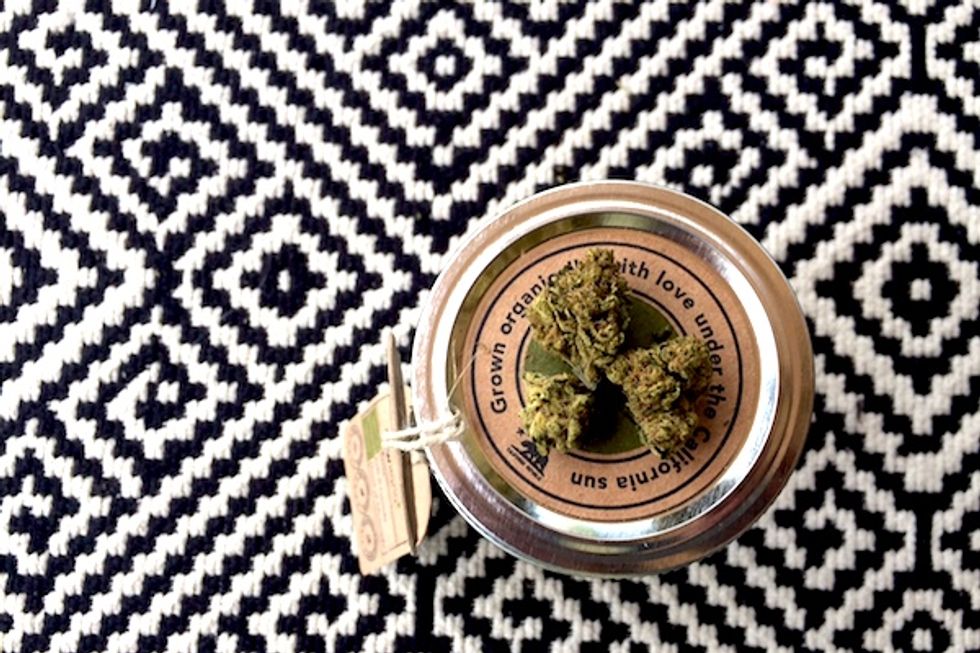 Welcome to the World of Organic Farm-to-Front-Door Cannabis

It’s a mellow Friday afternoon in the rugged hills of Oakland. Water trickles in the koi pond on a tree-shaded deck, and a Wheaten terrier chills at our feet. Could this day get any better? Well, there are also six grams of organic cannabis, fresh from a farm in the Emerald Triangle, en route via courier to our front door. An email confirmation says, “We hope it puts a smile on your face.”

Here in the Bay Area where we care so deeply about the provenance of our food and the manner in which it is raised—and where our state’s number-one cash crop, cannabis, is beginning to emerge from the shadows and into the light of day—it was only a matter of time before someone brought sustainable cannabis from the farm to the proverbial table.

Enter Michael Steinmetz, founder and CEO of Flow Kana, the Dogpatch-based cannabis brand that sources sun-grown buds directly from small, organic family farms in Mendocino and Nevada counties and then delivers them, in reusable mason jars, to your home in 30 minutes or less. That is, if you live in San Francisco where Flow Kana has been delivering to thousands of card-carrying medical marijuana users since February, or in Oakland, where delivery service officially begins this week.

Before you reach for that too-easy epithet, “the Uber of pot,” slow down…Eaze already holds that title. Besides, even if Steinmetz does hope to someday become “the Apple of cannabis”—an iconic mainstream brand and a pioneer in its field—Flow Kana has wholesome California values at its core. So maybe they are more akin to Lyft? “I’ll take that,” the founder laughs.

An affable Venezuelan who looks more fútbol player than former NASA engineer (hint: he’s both), Steinmetz is relatively new to the field of cannabis, but he’s well educated on the topic and serious. Never a smoker in high school or college (“It was mom’s medicine,” he recalls, pointing to his mother’s use of cannabis to treat a serious illness), his experience with the stuff was limited until one day he lit up with a few astrophysicists at NASA. “It was just a totally different thing,” he remembers.

Post-NASA, and after an entrepreneurial stint back in Venezuela, the Carnegie Mellon graduate found himself in SF and interested in the cannabis space. “I wanted to see cannabis evolve in a professional, responsible way,” he says. So, he took a job at a Berkeley dispensary to learn the ropes. Instantly surprised by the dispensary’s massive margin (70 to 80 percent as compared with the 25 to 35 percent of your average successful business), the entrepreneur sensed a problem in the industry and began looking further up the supply chain.

Anyone with a basic understanding of business can probably guess what he found: Turns out, larger companies and retailers typically pay farmers a low wholesale price before pricing the cannabis at a large markup to sell to patients (and partyers) in need. Even more troubling are the practices Steinmetz found among some “rogue farmers,” as he calls them—inexperienced and irresponsible growers, desperate to make a buck on the Green Rush, who are illegally diverting water sources to supply their crops, harming the land and wildlife in the process. (The SF Chronicle posted a piece on this subject earlier this week.)

“There just wasn’t transparency around who was making what, and what chemicals and pesticides they were putting into it,” he says. So he set out to create an honest to goodness brand, one where he would have full control over the product, where “consistency and reliability are key.” Steinmetz raised about $500,000 in seed money last year, and is currently in fundraising mode, seeking upwards of $2 to 3 million.

Today, Flow Kana sources its cannabis from seven fully organic Northern California farms. All the cannabis is lab-tested for potency and purity (from mold, mildew and pesticides), and all the growers are paid fairly to ensure continued and ever-improving sustainable practices. This includes the practice of outdoor cultivation, which is important since the more-common mode of indoor cultivation—which began out of necessity in the days when illegal growers were shielding their crops from the feds—is a massive energy suck, requiring lighting, air conditioning, and generators out the wazoo. Flow Kana estimates that indoor cultivation is responsible for five to eight percent of California’s total energy consumption.

But supporting these boutique growers isn’t just nice for maintaining the quality and safety of California’s ever-growing cannabis supply. Steinmetz says that cannabis might be poised to be the crop that can save our independent local farmers from extinction in the face of Big Agra. “They grow their cannabis in gardens next to the broccoli and the lettuce,” he says, but it’s the sale of the cannabis that is increasingly helping to cover the high costs of maintaining a homestead and raising all those other organic fruits and veggies.

Fostering a sense of community in agriculture plays an important role in Steinmetz’s modus operandi (he dreams of offering CSA boxes filled with both kinds of leafy greens), as does the goal of growing a market-dominant company—he envisions a future as the first widely recognized cannabis brand, of TED-style conferences and “enlightened” events (already Flow Kana is hosting medicated movie screenings and the like). But it is the potential for a “shift in our culture” that seems to get the founder excited in earnest. “Imagine a society,” he says, “that’s friendlier, a little giddy, and more tolerant. That’s what interests me.”

But back to our special afternoon delivery. For $50 a piece, we selected, via the mobile app, two, three-gram sample packs: the Inspired, a sativa sampler that promised to stir our creative juices; and the Zen Master, a jar of indicas more conducive to relaxation and sleep. Upon our first taste of Cherry 47, a sativa grown by Sense Farms in Nevada County, Flow Kana delivered on its promise: We smiled so hard our faces hurt.  //  To register with Flow Kana, you must have a medical marijuana doctor recommendation and a valid ID. Go to flowkana.com