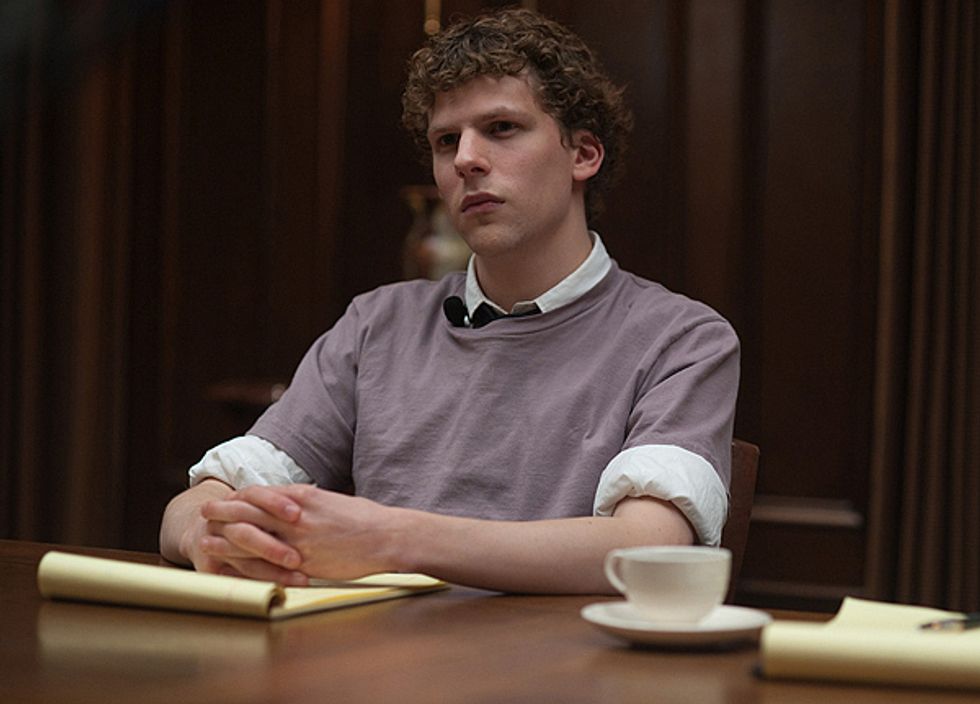 Unlike MySpace co-founder Tom Anderson, who once greeted the social networking site’s newest users as a default friend, his smiling face plastered on the screen like a digital welcome mat, Mark Zuckerberg rarely seems to have used his position as Facebook co-founder to collect pals, real or imagined.

Until now, the man most responsible for the world’s largest online clubhouse, who innocently describes his mission as making the world “a more open place by helping people connect and share” – neglecting to mention the roughly $7 billion his unique brand of altruism is reportedly worth – has managed to remain largely anonymous outside his circle of business associates, who should never be confused with his buddies.

That will change with David Fincher’s The Social Network, in which Zuckerberg (Jesse Eisenberg) is depicted as the ultimate wannabe, a fresh-faced Harvard sophomore stung by his inability to climb the social ladder. Never recruited to join any of the college’s famously discriminating final clubs, he is determined to create his own club, where he not only belongs, but wields his power like a scepter.

Did Zuckerberg draw his tireless motivation to succeed, to show up the clubs that never seemed to want him, from a bitter romantic breakup? Was he so infatuated by the rock-star entrepreneurs like Sean Parker (Justin Timberlake) who welcomed him to their own high society that he betrayed his only true confidant – Facebook co-founder Eduardo Saverin, played by Andrew Garfield (Red Riding: 1974) as naïve but unwaveringly loyal? Or was he just a misfit looking to fit?

In The Social Network, a fascinatingly thorough account of Facebook’s rise to the top of the social-networking game, adapted from Ben Mezrich’s bestseller The Accidental Billionaires by The West Wing creator Aaron Sorkin, all these things are true of Zuckerberg. And yet he remains an enigma. We learn little about his upbringing. His gaze is impenetrable, his speech coldly calculated. The only emotion that registers is contempt – for the women who resist his advances and the men who dare to challenge him.

That’s no fault of Eisenberg’s, so often cast as an agreeably ineffectual nerd in movies like last year’s Zombieland but impeccable here as a maladjusted visionary driven by a desperate need for acceptance in circles of power. Whether anyone really knows Zuckerberg – least of all Sorkin and Mezrich, with whom he refused to cooperate – is anyone’s guess.


More charismatic is Parker, the fast-talking, laughably paranoid Napster co-founder who seduces Zuckerberg with a dazzling sales pitch, encouraging the Harvard dropout to trust his instincts by keeping Facebook “cool” – i.e., advertising-free – until it’s big enough to make him an overnight billionaire. Zuckerberg is taken in, and why not? Parker’s advice proves sound enough, but one senses their alliance is rooted not in mutual admiration, but in a shared desire to join the elite.

As in real life, Zuckerberg has no shortage of detractors in Fincher’s mesmerizing but frustratingly incomplete character study. Among them are Saverin, whose story was the basis for Mezrich’s book and Sorkin’s screenplay, and twin sons of privilege Cameron and Tyler Winklevoss (both played by Armie Hammer), Harvard crew stars who accused Zuckerberg of stealing their intellectual property to create his social-networking colossus.

Do their claims have merit? We suspect they do, though Zuckerberg’s decision to settle rather than fight them in court – awarding $65 million to the twins, and $1.1 billion to Saverin, who, as Facebook’s first investor, demanded what he considered a fair share of the profits – is no admission of guilt. As one lawyer puts it, the settlements are mere parking tickets, speed bumps along Zuckerberg’s way to more unimaginable riches.

What The Social Network makes clear is that Zuckerberg’s former partners, like the girl who couldn’t wait to get away, see him as a condescending,  status-obsessed geek who holds a grudge. And in some ways Fincher, who has portrayed serial killers both fictional (Seven) and real (Zodiac), has never presented a character as remorselessly vicious as the implacable cyberpunk. Whether the portrait is accurate is, again, hard to know, but Fincher and Sorkin have forcefully stated their case.

The Social Network opens at midnight at the AMC Loews Metreon. For tickets, click here.