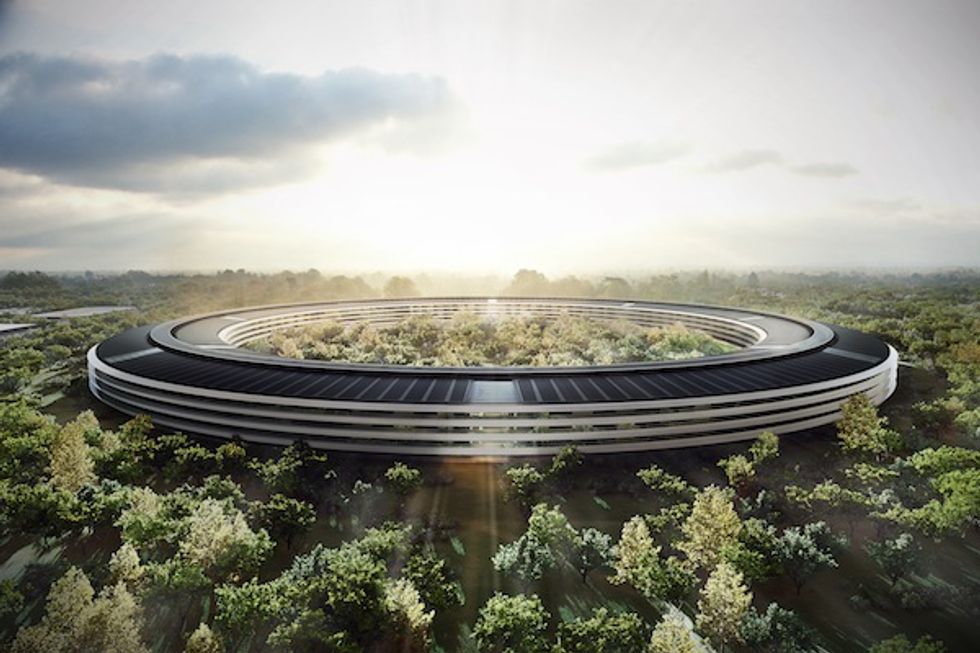 One of my favorite quotes about architecture is inscribed on the exterior wall of San Francisco’s already fabled The Battery. Speaking about the need to rebuild the British House of Commons after World War II air raids, Winston Churchill said, “We shape our buildings, thereafter they shape us.” With that utterance, the British Bulldog distilled the essence of why architecture matters. Good buildings are not just pretty to look at; they can inspire collaboration and community. Because they work better, they make our lives better.

It makes sense that the companies that have disrupted our society with a “think different” mentality would employ the same approach when it comes to building their own headquarters. Three of the biggest tech companies in the world are in the process of transforming their environments. We look at what’s building at Apple, Facebook, and Google.

According to Architectural Record, an “out of the blue” phone call launched the design of the futuristic Apple headquarters (pictured above). As Norman Foster remembers, Apple’s most famous founder began the conversation by saying, “Hi Norman. I need some help.” Fast-forward five years, and Jobs’ vision, which from the very beginning was of a spaceship-like edifice, is being built (construction is underway and employees will take their seats in 2016).

The building will look like a giant circle surrounding a forest and garden-filled courtyard that recreates the days when people called the Santa Clara Valley the Valley of the Heart’s Delight due to an abundance of flowering fruit trees. You probably know it as Silicon Valley, but Foster says that the late Jobs liked to reminisce about the days when he was growing up Los Altos and the area was filled with as many farmers as engineers.

When it is finished, 13,000 Apple employees can experience a bit of that bygone piece of California. Although the ring-shaped, 280-million-square-foot building is big, it will occupy just a third of the lot (a portion of which will be used to house a Hewlett Packard complex), while 80 percent of the property will be green space. Employees will see trees, plants, running trails, and biking paths—but what they won’t see is cars. The parking garage will be subterranean and outfitted with over 100 charging stations for electric vehicles. Designed to operate on solar power and renewable energy, the building is supposed to be one of the greenest in the world—for it’s size.

When Facebook decided to expand beyond its Gensler-designed main campus, Frank Gehry was tapped to build what is being called Facebook West. According to reports, the new Facebook will be located across Highway 101 from its current location (employees will access it via an underground tunnel). Mark Zuckerberg, Facebook co-founder, chairman, and CEO, posted on his timeline: "The idea is to make the perfect engineering space: one giant room that fits thousands of people, all close enough to collaborate together. It will be the largest open floor plan in the world, but it will also have plenty of private, quiet spaces as well.”

In a post published by Wired, Facebook environmental design manager Everett Katigbak says the open plan will allow employees to quickly reconfigure their desks to work together.

According to news reports, this campus is not without a green space of its own: The entire roof will be a park.

An employee of Google described the company as a “hermit crab” because, like the crustaceans that look for empty shells to inhabit, the company has remodeled existing buildings to their needs. Their current headquarters, aka the Googleplex, is located on Amphitheatre Parkway in Mountain View. For the first time, the mega company is preparing to build a shell of their own, from scratch—or are they?

The company hired NBBJ, an architecture firm based in Seattle that’s known for it’s good-quality quantity, to create a new Google outpost on land they leased from NASA on the lot next door to their current headquarters. The company is calling the new site Bay View, and it was to be done and occupied next year.

But, in a recent article in the San Jose Mercury News, Mountain View city planners say the company has put plans on ice, for six month to a year. A city manager is quote as saying he was “a little surprised” by the action, but understood that the company wanted the time to refine the look of the nine curved buildings.

A Google spokesperson told reporter George Avalos: “We want to make our Bay View campus a terrific and environmentally sustainable place for Googlers to work.” Who knows what the revised building will look like? But, if Google’s architecture follows their product development, we can expect something wonderful.