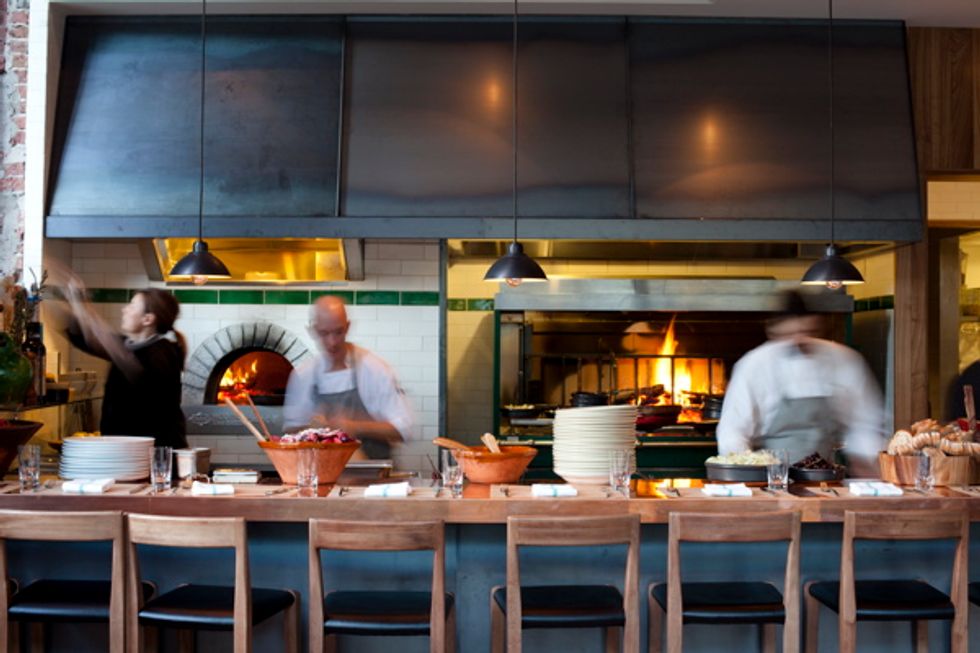 There are two types of menu paralysis.

1. The kind when you open a menu and can't decide what to eat because it all sounds a bit … wrong: This includes leap-of-faith menus: "Oysters on the half shell with a cranberry-cilantro mignonette and gingerbread sprinkle." And frustrated-poet menus:  "White chicken. Rain water. Red wheelbarrow."

2. The kind when you open a menu and can't decide what to order because you want to eat it all.

Paralysis case number two is the reason why I sat with Cotogna's menu for quite a while before budging to order.

Cotogna is Quince's casual new little sis, located right next door to the big fine-dining restaurant. As you'll find, ordering from the very rustic, Italian and wood-fire–influenced menu feels a little bit sad because of all the things you have to leave behind. For instance, the pizza with salt cod, egg and anchovy. And the carrots with rooftop honey and anise. (Why does honey from a rooftop sound so appealing? Made by bees with a view, I suppose.)

I would have liked to have had a pizza but I went for the pasta. You have to get pasta from a restaurant that has Michael Tusk overseeing it, right?

Right. The pici tossed with nubby bits of sausage and chestnuts fell into that ugly to look at but beautiful to eat category. There was also a gorgeous halibut crudo, a rich spinach sformato and spit-roasted pork with fennel and satsumas from the rotisserie (which has gotten about as much geeked-out press as Michael Tusk himself). The food was all well done and well priced, which brings up the equally excellent wine list compiled by renowned wine director David Lynch, featuring some unlikely gems from appellations such as Montecucco in Tuscany (yes, I had to ask about this one), wherein every bottle is $40. Very fun. Very liberating. Kind of like the Everything's A Dollar store.

But much much better.

Which brings me to the craziest thing about Cotogna: The $24 prix fixe. Considering the heavy hitters behind this modestly priced three course menu, I can't think of a better deal in town. See those chair in front of the fire in the picture up above? I'd like Cotogna to save me one every night of the week.