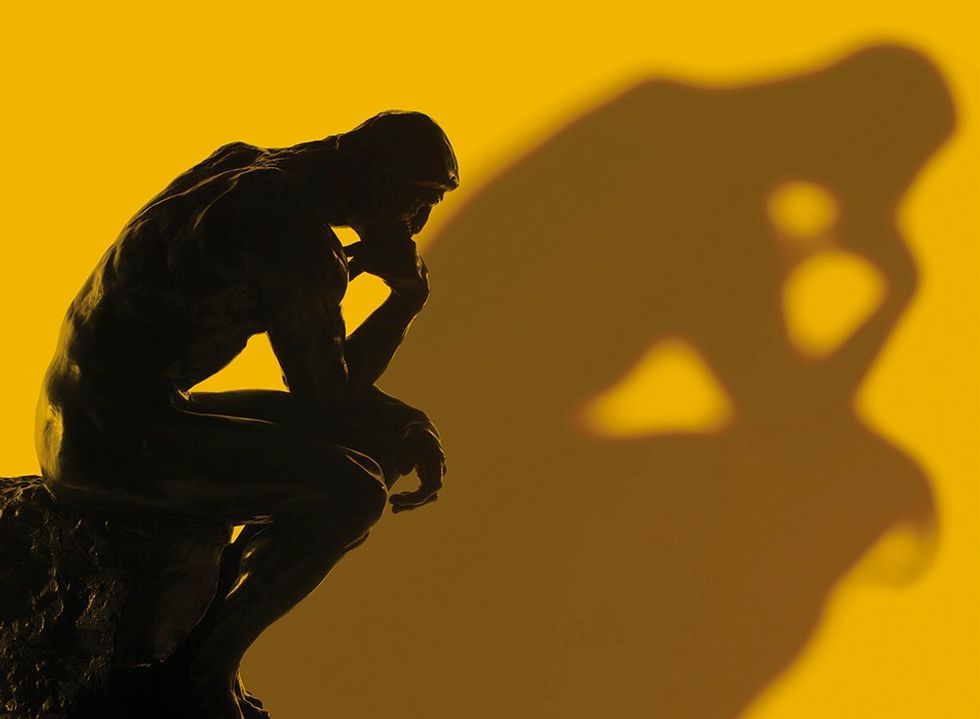 This week, in addition to the reliable assortment of fearless young artists, the Bay Area receives the works of two major deities: Chuck Close and Auguste Rodin. If “The Thinker” isn’t a great excuse for a day trip down to Monterey, we don’t know what is.

Auguste Rodin: Light and Shadow, at the Monterey Museum of Art

It is hard to think of thinking, without Le Penseur (The Thinker) by Auguste Rodin eventually curling into form in the mind’s eye. The image of this modern masterpiece has embedded itself in our culture so deeply, it is easy to forget that it actually exists somewhere, an expertly carved hunk of bronze and marble.

For the next few months, that “somewhere” is the Bay Area – specifically Monterey. The Monterey Museum of Art presents a full exhibition of Rodin’s sculpture, in all its physicality. What is often lost in the endless representations of Rodin’s work, is how deeply pocketed and curved his sculptures are. In addition to mastering the portrayal of human emotion, Rodin was an expert with light, shadow and sense of movement. This not-to-be-missed exhibition directs its focus toward that.

We know Chuck Close as an artist obsessed with faces, a subject he pursued with unrelenting urgency throughout his illustrious career. Throughout the 1970s and 80s his mugs became ever larger in scale, employing photorealist approaches of “pixilation” and grid transfer that would become his signature.

Lesser known are Close’s prints, which he executed in collaboration with San Francisco’s own Crown Point Press. It was through these, in fact, that Close explored many of the techniques he would eventually apply to his painting. Soon to be on view at the De Young Museum, they offer a new angle from which to approach the distinctive modern master.

Pak Han produced abstract, expressionistic paintings for over ten years before he ever picked up a camera. He adopted the device as a documentary instrument; however, his approach soon drifted toward the theatrical as he took to capturing performance pieces in striking, cinematographic compositions.

The interdisciplinary impulse is more than apparent in Han’s latest exhibition, Transfiguration. Here, Han’s surreal photographic dreamscapes, introspective and denuding, constitute only one part of an immersive, multi-sensory “photo installation” involving sound and performance. Over one year in the making, this show promises to grip from all angles.

Judith Foosaner’s large-scale works are invariably described in terms of momentum, traffic, beat, even dance. Her process-driven work involves making linear drawings, cutting them out and collaging them on canvas, then applying paint as the newly configured formations command. Exuding a distinct sense of rhythm and improvisation, the impressive black-and-white creations beguile as jazz does, and are irresistible at that.