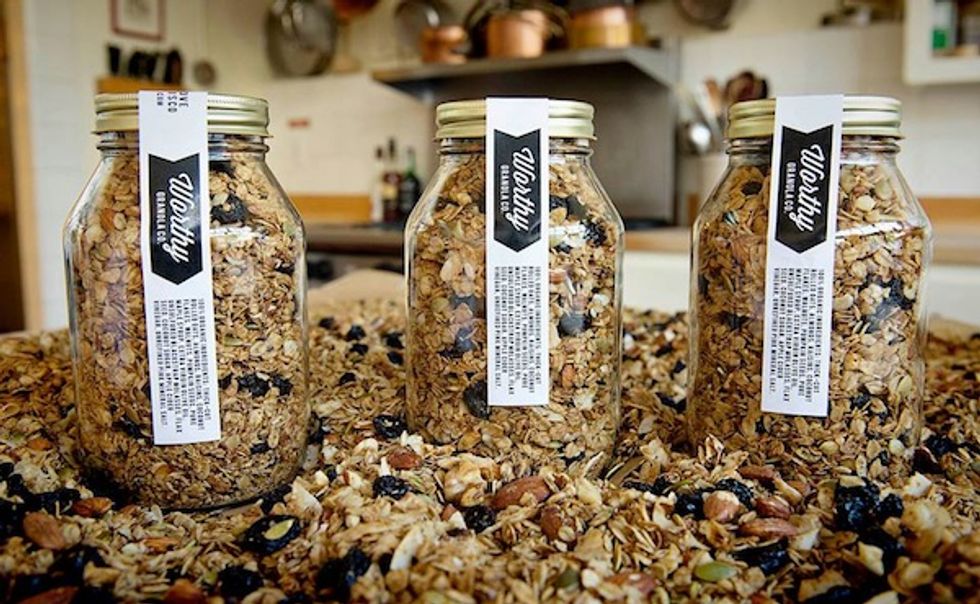 Though it was created as a health food more than a century ago, granola has devolved into a sugary excuse for a balanced breakfast. Several Bay Area companies are bringing the healthy back with an emphasis on local sourcing and high quality taste.

Here’s a look at five granolas worth their weight in non-GMO soy milk:

Café Fanny Granola
The original cereal was sold at Alice Waters’s Café Fanny (now closed) but became so popular customers asked for it sans milk so that could take it home. Cassandra Chen of CC Made bought Café Fanny Granola in 2012 and has since added two new flavors: Cranberry Coconut with thin slices of toasty dried coconut and Flaxseed. All varieties taste of honey, the sole sweetener, but none are overtly sweet. Because these granolas contain very few clumps, they’re particularly good sprinkled on a fruit crumble, one of Chen’s favorite ways to eat them.


Nana Joe’s
Former Nopalito pastry chef Michelle Pusateri is a surfer and wanted something that would improve her endurance. She discovered a powerhouse in the form of maple syrup, which she relies on for her 9+ favors. Pusateri’s most innovative offering is her rotating Chef’s Blend, which she develops with different local chefs. Her current one, concocted with Richie Nakano of Hapa, contains sesame seeds, cherries, puffed rice, and seaweed. The seaweed was Pusateri’s idea. “It matches perfectly with tart cherries,” she says. Later this month, she’ll release her collaboration with Evan Bloom and Leo Beckerman of Wise Sons. What it'll it be? “Think rugelach,” says Pusateri. And, because she is accustomed to excruciatingly early surf sessions, she also makes a buzzy Ocean Beach Bar with Four Barrel Coffee, almonds and TCHO nibs.

San Franola
Co-founder David Miskie’s father spent twelve years developing a low-sugar granola to combat his type 2 diabetes. Miskie and partner Matt Teichmann converted the recipe into a business. Unlike other granolas that are baked flat on baking sheets, Miskie and Teichmann move their granola continuously as it roasts to achieve a deep shade of brown. A package consists almost entirely of clusters that are barely sweet, dry and very crisp, which makes it a good match for milk or yogurt. Three new flavors, Lemon Zest, Ginger Snap, and Toasted Chia, will come out in October.

With a salty bite and just enough sweetness from molasses, coconut sugar, and maple syrup, Jeanne Norsworthy’s granola lives up to its name. Sprouted nuts, pumpkin seeds, raisins and flax comprise the original flavor, but Norsworthy has a new one soon to be released. She’s coy about specifics. “Let’s just say it involves TCHO,” she says.

“If you take a general sample of granolas, you'll notice that you are paying a premium for what is essentially a bag of blandly toasted oats,” says Craig Boon, founder of NutHouse! Granola Co. That’s why he crams his bags with whole almonds, pecan halves, walnut halves, toasted coconut flakes and plump raisins from Bella Viva Orchards. A typical cinnamony spoonful will yield a ratio of 70% nuts and fruit to 30% oats. Trained as a chef, Boon previously worked under Michael Mina at Aqua and most recently as the Executive Chef at the Westin Market Street Hotel. He insists on mixing the granola by hand so that he can monitor quality. “It’s just me right now,” he says, “so what I really need is for folks to keep asking their retailers to carry my granola.” He is in the process of moving to a bigger production facility in Berkeley.

Did we miss your favorite granola? Let us know.