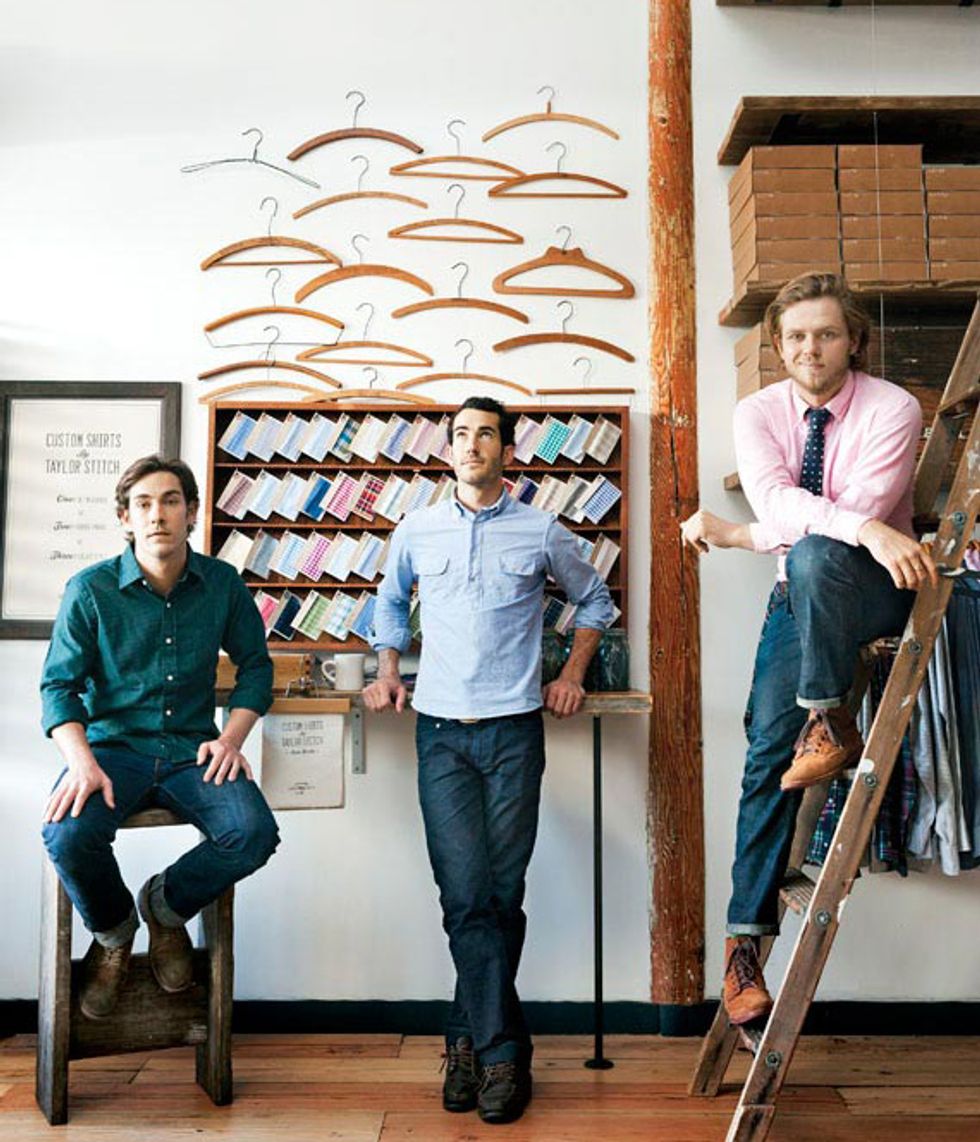 How Men Are Changing the Fashion Landscape in SF

With four successful fashion labels rooted in the city, these guy’s guys are upping the ante on casual menswear. T-shirts, jeans, button-downs, and hoodies have never looked so good.

If you’ve spent any time in the Mission, there is a good chance you’ve seen the guys from Taylor Stitch: Michael Maher, Mike Armenta, and Barrett Purdum are staples of the neighborhood’s hipster community. Earlier this year, the trio opened The Common, a menswear store specializing in indie labels, on the same stretch of Valencia Street as Four Barrel, Voyager, and Nooworks. Their own brand, Taylor Stitch, is of course among the offering.

Launched in 2008 with a simple mission—to make quality, small-batch button-downs for men—Taylor Stitch has a local ethos and quite the diverse following. All ready-to-wear designs are produced in SF before being snatched up by graphic designers, investment bankers, and even Jake Gyllenhaal, who’s been known to stop by. “Men have a standard uniform: shirt, pants, shoes,” says Maher, who notes that while it’s not a manufacturing capital anymore, the Bay Area continues to nurture a closely knit community of makers. “We’re not trying to reinvent the wheel. We’re just trying to make the wheel look really good.”

The Taylor Stitch guy can walk away with timeless, high-end shirts for as little as $125 and now, thanks to demand, hats, T-shirts, belts, and ties too. “We’re not trying to be fashion guys,” says Maher. “We’re just three guys making clothes for other guys.” Well, for now. Look for denim, a women’s collection, and a second SF boutique coming soon.

The city that celebrates a perfectly crafted Sightglass latte at $4 a pop is just the place to support Pete Searson and Tony Patella, the good friends behind the $200 jeans at Tellason (a clever combination of their two last names).
“The world didn’t need another denim brand when we launched in 2009,” says Patella. “But companies were selling expensive jeans that lacked quality and were labeling them as ‘premium.’ We just felt there was room for something better.”

So the two, who count Mossimo, Paul Frank, Converse, and Gap on their resumes, put their combined 20 years of experience to work. They decided they wouldn’t just make jeans. They would make the best jeans on the market.

Today, Tellason runs out of offices in SoMa and Mill Valley to create three classic fits of men’s jeans in two top-notch raw denim fabrics, which are all carefully cut and sewn at San Francisco factories. In just a few years, Tellason has become a mainstay in upscale boutiques both here and abroad, finding a niche among those with a keen eye for artisan detail. In San Francisco, look for them at Harputs in Union Square and AB Fits in North Beach.

With a growing retail presence in Europe, Australia, and Japan, Tellason is looking toward global expansion and is hard at work on a line of denim shirts plus a bag collaboration with Portland’s Tanner Goods. But Patella and Searson say they have no intention of moving the business anywhere. “We’d be idiots to walk away from this city,” says Searson. “San Francisco is the birthplace of denim.”

In October, 48 Levi’s stores nationwide rolled out a capsule collection of henleys and screen-printed raglan jersey tees, all made in San Francisco by Marine Layer’s sew shops. The launch marked the brand’s largest run to date as well as its first foray into the wholesale market.

But it hasn’t always been Levi’s and national acclaim for founder Mike Natenshon, whose girlfriend questioned his fashion sense in 2008. When she tossed Mike’s favorite old shirt in the trash, he had a light-bulb moment: What the world needed was well-made, affordable, casual wear for dudes. So he ordered 15 bolts of fabric and made a prototype. “I never thought it would be so hard to make a T-shirt,” says the former finance major, whose hedge fund experience hadn’t quite primed him for fashion.

Natenshon launched Marine Layer in early 2009 with a trunk show at his Russian Hill apartment. After the first 100 orders—mostly to friends and family—he began selling shirts online. When the momentum kept up, Natenshon dialed his buddy Adam Lynch, a consultant bored with his nine-to-five, to join the fledgling business. In 2010, the partners opened their first boutique on Chestnut Street.

“If we wouldn’t wear it every day, we don’t make it,” says Lynch of his super soft threads. It’s that easy wearability plus a good dose of humor—size “marge” anyone?—that’s attracting a cult following. But the two remain humble. “We keep our heads down and stick to making good shirts,” says Natenshon. “You won’t see us on the runway in Milan anytime soon.” However, you will see new styles at Levi’s this spring.

Do Cordarounds ring a bell? If so, then you may know Chris Lindland, the purveyor of horizontal corduroys known as Cordarounds, who launched his tongue-in-cheek brand after a dinner party conversation six years ago. What began as a personal creative project became an online bestseller, so Lindland expanded from pants into a full apparel label in 2010. Betabrand, as it is called, has since created 40 quirky, bizarrely functional products such as bike-to-work pants, black sheep sweaters, and reversible smoking jackets.

Looking at fashion through the screen of the Internet, Lindland has developed a model that, so far, is thriving in our social media-crazed world. Betabrand rolls out each new piece via a funny, irreverent newsletter about twice a week. The exclusive goods are all produced in limited batches of 200 to 300, and many sell out in as little as 48 hours.

As for those witty newsletters, Lindland says they make “people want to talk and write about our products.” The press is certainly buying it. Betabrand has scored ink everywhere from Wired to The New York Times, Stephen Colbert wore the brand’s USA pants at the Rally to Restore Sanity last year, and Conan O’Brien talked up the Gluttony pants, a collaboration with chef Chris Cosentino, on his late-night show. Chalk it up to the power of the press or to Lindland’s own background in web startups and sales. Betabrand is poised to rake in $2 million this year—double last year’s revenue. Who knew there was such a large demand for Japants?