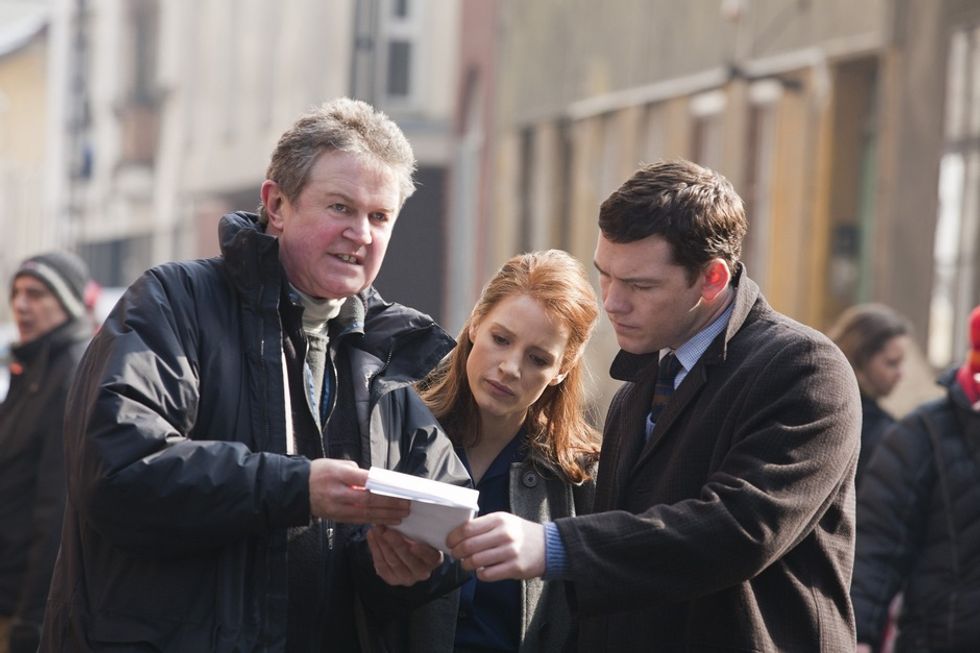 During an era when so many new directors come from the worlds of advertising and music video, catering to increasingly shorter attention spans and relying on gaudy visuals to engage audiences for seconds at a time, Oscar winner John Madden (Shakespeare in Love, not Monday Night Football) is a throwback to a time when dramas drew their strength from the spoken word.

The English-born auteur, whose taut new thriller The Debt arrives today, got his professional start running a theater company before an unexpected detour with the BBC led him to radio. It was there, he says, directing entirely oral adaptations of classic stories including Star Wars and The Empire Strikes Back, that he learned the discipline to craft cerebral narratives for a more visual medium.

“It taught me about the importance of engaging the audience’s imagination, and, not least – certainly very crucial to The Debt – playing with the rhythm of the vocabulary,” says Madden, 62. “It makes you pay attention to nuance because that’s all you really have to work with, but even then you have to give your actors the freedom to find the truth in the material, and the rhythm that lets a story breathe.”

Madden admits that the actors he assembled for The Debt – a remake of the 2007 Israeli drama about three Mossad agents whose well-documented heroism is based on a lie – did not require much coercion from behind the camera.

Considering the collective experience of screen veterans like Helen Mirren, Tom Wilkinson and Ciarán Hinds, that comes as little surprise. But what about the younger actors – Sam Worthington (Avatar) and Jessica Chastain (The Help), whom Madden fortuitously cast before their meteoric rises to stardom?

“I didn’t behave with them any differently – they certainly didn’t need any special coaching from me,” says Madden, who was struck by Worthington’s performance a sexually uncertain country boy in the 2004 Australian indie Somersault. (At the time, Madden knew very little about Avatar, much less how it would accelerate his young star’s rise to prominence.)

In the case of Northern California native Chastain, whose 2011 offerings also include Terrence Malick’s The Tree of Life, an adaptation of Shakespeare's Coriolanus and the upcoming apocalyptic drama Take Shelter, Madden was seeking an actor unburdened by "the baggage of fame" to play a younger version of Mirren’s retired Nazi hunter. Trusting his instincts, and Malick’s glowing recommendation, he gave her a look.

The rest, Madden says, is a history of studio changes and subsequently delayed release dates that ultimately, perhaps improbably, put The Debt in the best position to succeed.

“The movie is unusual in that it marries a really provocative dramatic narrative with a compelling genre, the thriller,” he says. “The original, being in Hebrew, was never going to reach predominantly English-speaking audiences, so I think, rather than playing into Hollywood’s culture of recycling, we had good reasons to do a remake. I could never reconcile myself with remaking Psycho or something like that.

“I didn’t think Jessica’s role would have benefited from a big star coming in and doing their thing, and if I can cast an unknown, all the better. When we started, Jessica might have been unknown, but now she is so visible, and people are talking so much about the fantastic work she’s done in these films. I’m sure she’d prefer they not all come out at the same time, lest the audience suffers some kind of Jessica Chastain fatigue, but I don’t think that’s possible. And if the publicity suddenly surrounding her gets more people to see The Debt, and her tremendous work in it, I can only view that as a blessing.”

The Debt opens today at the Sundance Kabuki Cinemas. For tickets and showtimes, click here.