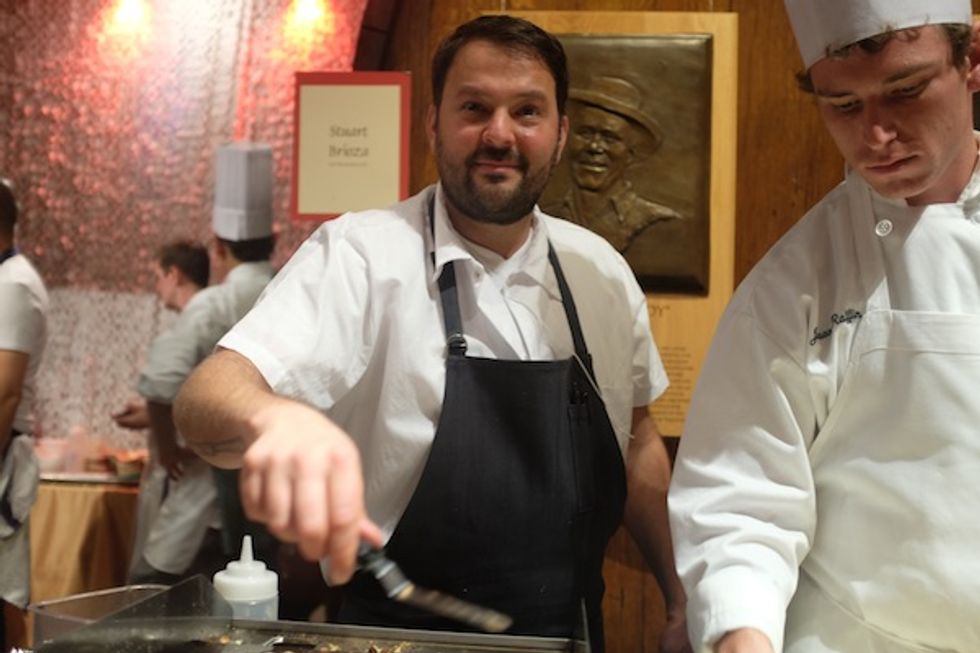 Stuart Brioza chef owner of State Bird Provisions, which won the James Beard award for Best New Restaurant, was a presenter at the CIA Worlds of Flavor conference earlier this month. We sat down to talk to him about one of the themes of the conference, creativity.

Where do your ideas come from?

Our ideas are more spontaneous and organic than you might think. For example the pancakes on the menu started off as one pancake, then one day I decided to put another on, then later in the week, a third. Creativity is an odd word. I don't ever feel we approach a dish with "how creative are we trying to be." At this point this it's just a reflection of how we taste food and think about food.

What makes a great dish?

It's got to be delicious. Within that it requires elements--salt, acid, fat and texture. Those are integral to our cooking and to the small plates we serve. They have to have vigor in one bite and then it's gone.

How does creativity drive you?

I studied the visual arts and was really affected by learning about the zone system of Ansel Adams and pre-visualization, you pre-visualize what you want to create. It opened up a realm of creative thinking. There are some systems, some manipulation and, more importantly, some forethought. It's a kind of training that influences what you do. Years later, I realized that the discipline of pre-visualizing is showing itself in my cooking.

How does creativity relate to the success of State Bird Provisions (SBP)?

If you're ten steps ahead everyone, you're just too far ahead of your time. Creativity has to be within the moment and relate to what's happening in the world. I don't know if SBP would have fared well 5 or 10 years ago. Its time was right. Our age had a lot to do with it too, Nicole (Krasinski, his wife and chef partner) and I were not just fresh into being chefs.

Creativity is more than just a great idea. Discipline and technique are still very important to maintain the integrity of the kitchen. The regimented discipline of the professional kitchen has made me a good cook. I feel I have a responsibility to maintain the integrity and standards, otherwise how do you create? How do you develop a philosophy? You don't develop it at 22, that's for sure. It's hard to take a young cook very seriously if they can't make a great chiffonade of parsley or julienne but they've got "great ideas."

Is part of creativity collaboration?

Yes. It's the ping-pong of cooking, sounding boards, we work through a dish by talking through it. With the exception of myself and Nicole I don't think any one dish is ever created by any one person. We want to engage and empower through creativity. We try to create an atmosphere for kitchen staff to feel comfortable talking about food and not just critiquing it.

What can you share about your next restaurant, The Progress?

With some of the success we've had at SBP I'm more confident in wanting to take the path less traveled and realizing that's what we stand for. Philosophically, The Progress will be no different from SBP. I want both of our restaurants to be known for the warmth, hospitality and engagement but I no longer want to open a traditional restaurant, I'm not interested in tasting menus or appetizer, entree, dessert. I spent about 14 years doing that. Think pizza and Chinese food, where you get to share food. I love that. SBP is a chaotic high energy version of sharing. The Progress will be symbiotic with SBP but the opposite of small plates.