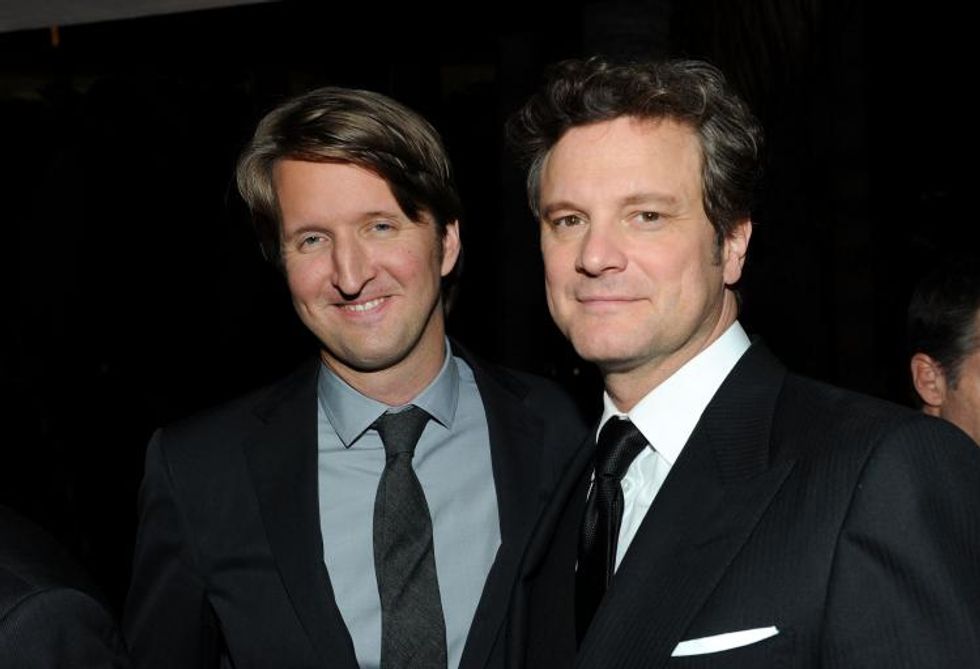 It was over five months ago that Tom Hooper put the finishing touches on The King’s Speech, a fan favorite at last year’s Mill Valley and Toronto film festivals, and now an Oscar nominee in 12 categories including Best Picture. Today, the London-born director is counting the hours until the Feb. 27 awards ceremony – not because he’s expecting a statuette, but because he wants to go back to work.

“It’s incredible to be nominated for an Academy Award,” he says. “I always knew I wanted to support the film because it’s a special story and it’s interesting to talk about, but the publicity machine has been working overtime for months already. I can barely sleep at night. At this point, I just want to do my job again.”

Hooper, 38, attributes the apparently boundless appeal of Speech – an inspirational drama about the friendship forged between Colin Firth’s tongue-tied King George VI and the therapist, played by Geoffrey Rush, who helped him overcome his crippling stammer – to the humanity inherent in the struggle.

“Everyone can relate to the fear of losing the ability to communicate,” says Hooper, who previously directed the 2008 HBO miniseries John Adams. “There are two types of frustration dreams that we’ve all had. One involves physical problems – we need to run away but we can’t. As a boy, I had a recurring dream about cricket. I was in the changing room and I had to go out to be the batsman and I couldn’t move.

“The other dream is the nightmare where you can’t speak – you need to scream out and you can’t. These are so common, I think it’s safe to say there’s a universal, deep-rooted awareness of our ability to communicate, and if we were to lose that ability, our humanity would be compromised. King George famously struggled with that.”

To play George – known to his family as Bertie – Hooper sought out Firth, the Oscar-nominated star of 2009’s A Single Man, who had captured the director’s imagination in the 1988 BBC TV movie Tumbledown. Playing an officer of the Scots Guard suffering post-traumatic stress, Firth showed a side of himself not then familiar to international audiences.

“Colin came to be known as Mr. Darcy in [A&E’s] Pride and Prejudice, and later for sending up that character in the Bridget Jones movies,” says Hooper. “He has a reputation for being very proper and refined, but in real life he grew up attending English grammar schools – public schools. He had to study to master the accent he speaks with in most of his movies because that’s simply not who he is.

“His performance as a 25-year-old in Tumbledown is extraordinary. Watching that, I knew he’d be right for Bertie, because he doesn’t solicit sympathy through any obvious tricks.”

Bertie, as speech therapist Lionel Logue breached the rules of familiarity to call him – at first to the future king’s irritation, but less so as they developed a camaraderie that would prove invaluable throughout George’s 15-year reign – was a reluctant heir to the throne whose disability was known well to his countrymen. He “white-knuckled it” through his earliest public addresses. Yet he became an inspiring symbol of British resilience during World War II.

“In Bertie, Colin is playing a man who’d survived a difficult childhood, who’d run away from power at every opportunity, and who never aspired to be king. In a sense, he humanized the royal family through his struggles, and I think it was his influence that has kept England a monarchy all these years. But Colin keeps him fiercely dignified. He doesn’t beg for affection.

“People at the time felt dreadfully sorry for him. But his presence, with every speech, came to be talismanic – if he could get up there and give these brilliant denunciations of Hitler’s might-makes-right doctrine, then England could persevere in its opposition to the Nazis.”

King George died on the throne in 1952; Logue passed away a year later. Hooper, who relied on Logue’s diaries and the testimony of his grandchildren in arriving at the movie’s portrayal of his relationship with Bertie – the monarchy was unavailable for consultation – says Logue’s family has likened their friendship to a happy marriage.

And that, to Hooper, is the most poignant aspect of Bertie’s story, and a theme common to the movies and TV series he has directed. “So many stories are about the power within ourselves – it’s all about me, me, me,” he says. “I keep making films about how sometimes greatness is achieved in deriving strength from our friendships and families.

“As much as the movie is a historical narrative, and one of the few films to take stammering seriously as a disability, it’s also an inspiring story about the transformative power of friendship. Whether it’s John and Abigail Adams or King George VI and Lionel Logue, we turn to others to discover the best in ourselves.”