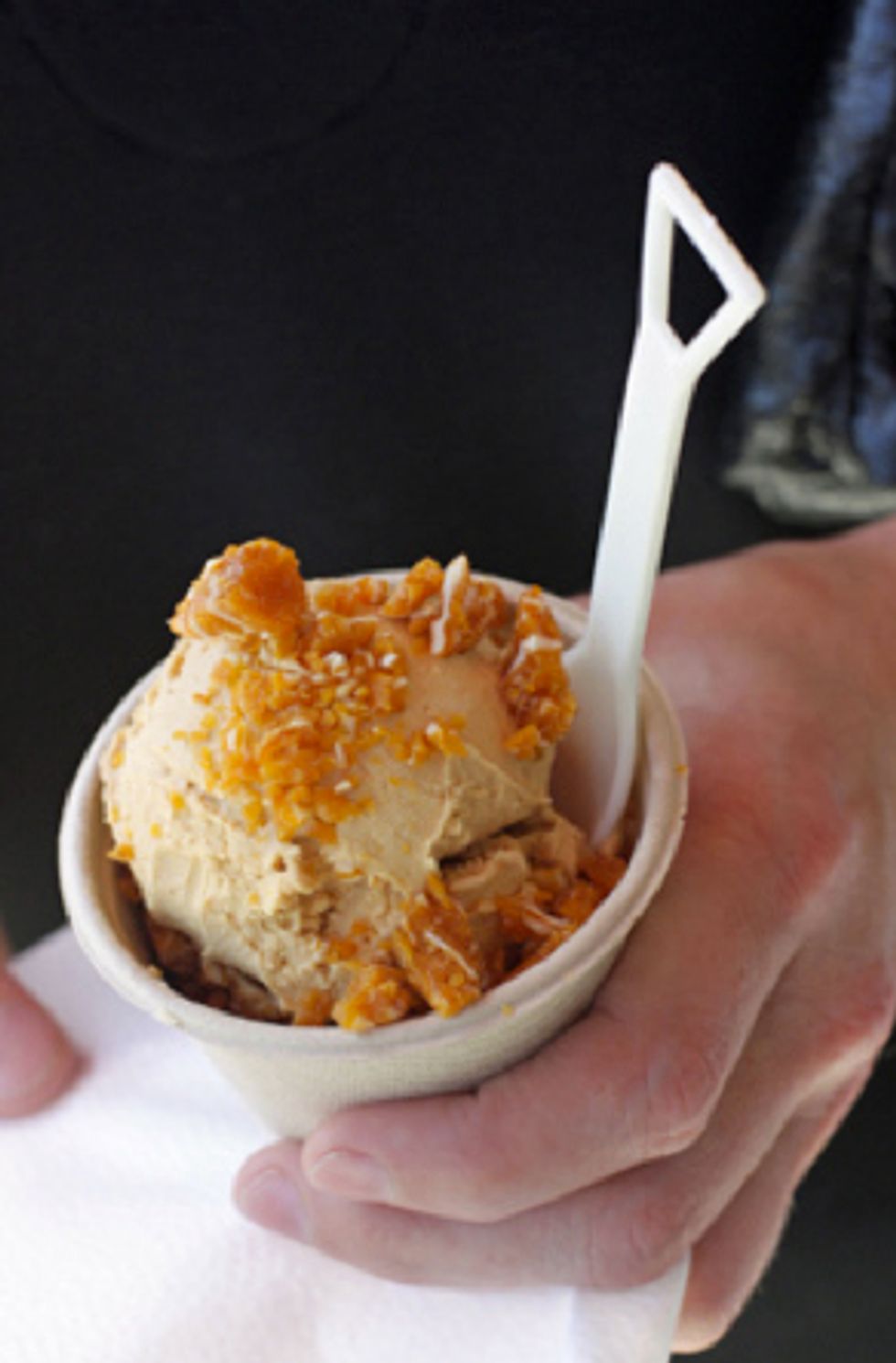 Smitten Ice Cream owner Robyn Sue Goldman just added a spiced fresh pumpkin ice cream with espresso spiked walnuts to her menu. Her ice cream shop opened at the Proxy Project in Hayes Valley a few months ago, touting liquid nitrogen ice cream. Although you probably don't want to think about science when you're digging into that freshly rolled scoop of seasonal goodness, it's the chemistry behind it that makes it taste so darn good.

"It's a scientific fact," says Goldman. "The faster you freeze something, the smoother the texture. To freeze something fast, you need to freeze it cold." Since liquid nitrogen comes in at negative 321 degrees F, it gets the job done. "The result is ice crystals that are much smaller, leading to a finished product that's inherently smoother and creamier."

There are pitfalls to using liquid nitrogen as a freezing agent: namely overfreezing and uneven freezing, but Goldman patented a machine she calls the Kelvin to help her avoid them. The Kelvins "make it right every time," she says. And since Smitten churns scoops to order daily, that means her flavors change daily too. Hence the super seasonal pumpkin-packed variety offered today.

Over at Fillmore Street's newly reconcepted Citizen Cake Ice Cream Parlor and Eats, Elizabeth Falkner likes the added showmanship of liquid nitrogen too. "I love fine dining," says Falkner. "And I'm all about bringing elements of it to a new audience." You can see her ice cream maker in action, churning out fresh batches every morning at 11 a.m. Unlike the folks at Smitten, Falkner stores her ice cream in the freezer, allowing it "to set a bit," before scooping. Falkner is indebted to liquid nitrogen, in a way, because it enabled her to bring ice cream to her new restaurant space, which is much smaller than her original Hayes Valley location of Citizen Cake.

"At the original Citizen Cake in Hayes Valley, I had a whole room dedicated to ice cream making," says Falkner. "I didn't have the space here on Fillmore, so I knew liquid nitrogen was a good solution." Falkner uses the same Straus base, and organic, pasteurized eggs she always has, but without all the heavy duty materials and the lengthy freezing process associated with the old method, she's now saving time, money, and getting smoother results than before. Right now at Citizen Cake, you can taste vanilla, dairy-free coconut, coffee, strawberry, chocolate and a grilled sourdough flavor, made by steeping sliced of toasted bread in the ice cream base.

And if you go by Smitten next week, they'll be test-driving ice cream sandwiches made with thin chocolate pizelle wafers. Goldman says the cookies are thin because they really want to showcase the ice cream. Since the use of liquid nitrogen allows her made-to-order scoops to have zero emulsifiers, zero stabilizers and spend zero time on the shelf, I'd say she's onto something.