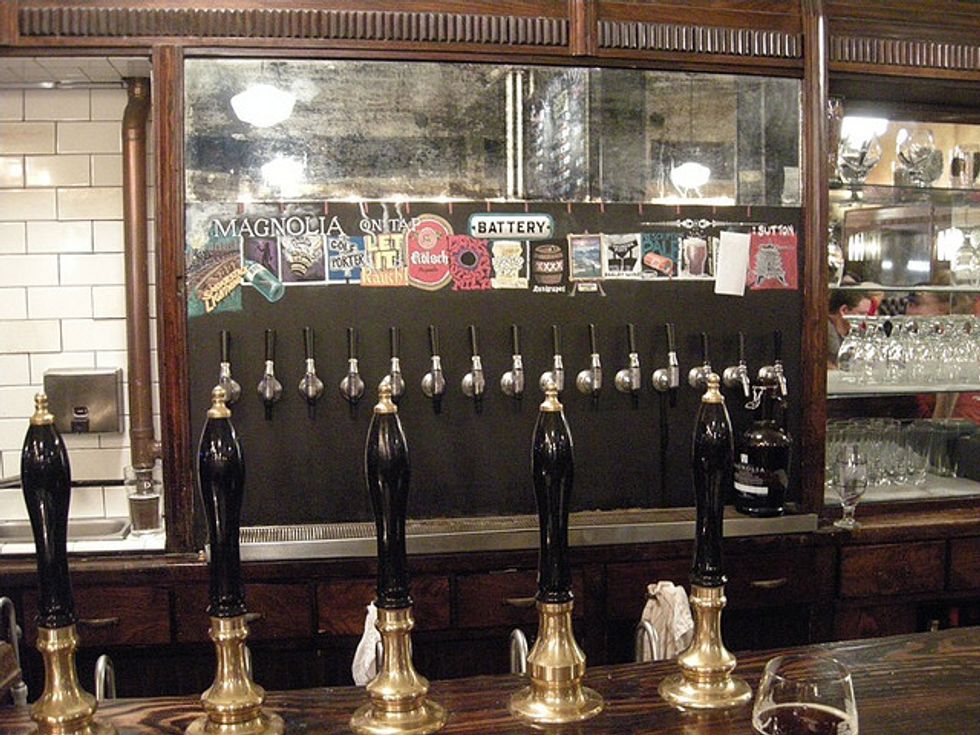 This summer, rumblings about Magnolia Pub's new Dogpatch brewery and surfaced in the blogosphere. We caught up with Dave McLean, mastermind behind both the original Magnolia Pub and the Alembic on Haight Street, on details of his new venture, which is still slated to open in 2011.

How will Magnolia Brewery be different from Magnolia Pub?
We reached maximum capacity at the original Magnolia Gastropub & Brewery on Haight about three years ago and have been struggling to keep up ever since. It's been tough to do everything that we want to do, beer-wise, while trying to avoid running out of everyone's favorites. Our expansion plans are, therefore, centered around building some breathing room in terms of beer production, and to help us get our beer out there a little further so more people can enjoy it.

Having said that, I've always loved the "brewpub" model of a craft brewery, because there is something very satisfying to me about seeing the product through from grain to glass and watching people drink the beer right where it is made. That dovetails with a love I have for traditional pubs as community hubs, especially in the UK.

As a brewer, I'm painfully aware of how much can go wrong when beer leaves a brewery. It's a lot more delicate than people realize. There's still nothing like drinking fresh beer at its source. Being able to control every aspect of beer production, dispense, and staff education, not to mention the food, service, and atmosphere, is something I have fallen in love with over my years working at Magnolia and then again by opening Alembic. So, it's no stretch to say that I'd want my new brewery to feature another place to come in and eat, drink, and socialize where we brew our beer.

The only significant difference will be that the brewery will be much larger than the pub/restaurant in the new space. That and the fact that it will have its own character, its own personality, and its own menu. The beer and our overall approach to sustainability, sourcing, cooking, and brewing will be the common threads.


You're thinking of having wine on tap at the new place?
Wine on tap is as good as that particular wine can be. There is nothing unique to the taste experience of draft wine other than the fact that, for a handful of great reasons, well-cared-for draft wine is less likely to become oxidized or otherwise taste differently from what the winemaker intended. No issues with cork, no open bottles sitting overnight or worse, etc, I've spent my entire adult life working around draft beer so the merits of treating wine similarly were immediately obvious when presented with them. Throw in the environmental benefits of reduced packaging and the potential for a winemaker to deliver wine to drinkers at a lower cost and its easy to see how draft wine is a wave of the future.


There have been a handful of great local pioneers doing the heavy lifting of getting people to try wine on tap. We've been serving a special Magnolia blend from Sutton Cellars on tap for about two years now and I'm looking very forward to expanding that relationship. Carl Sutton has been one of the most passionate advocates for wine on tap and he throws a great chili cookoff.

Will you have cicerones at Magnolia Brewery?
I've been really enthusiastic about the Cicerone program since its creator, Ray Daniels, began seeking review and comments from the craft beer industry for the Cicerone syllabus when he was originally putting it together. We've always tried to make sure our service staff is very well-educated about beer, brewing, and our beer in particular. I love hearing from visiting brewer colleagues that our staff knew their stuff.  It's taken longer than I would have liked but we're making the first level exam (the Certified Beer Server exam) mandatory for all service staff at Magnolia and also encouraging them (and providing any training help we can) to study for and take the more involved Certified Cicerone exam. I think it's a great way to raise the overall level of beer knowledge and beer training and that's great for craft beer.

Why the Dogpatch?
I love it over there. It's one of many examples of what a great city of neighborhoods San Francisco is. And it seems like a magnet for great food and beverage businesses, from restaurants like Serpentine and Piccino to producers like Recchiuti Confections. I love the new ice cream shop, Mr. and Mrs. Miscellaneous. We're about to be neighbors with Sutton Cellars, and I will be very happy to be so close to Kitchenette when I am over there, too. I get their tweets everyday announcing their menu for the day but I'm rarely able to get there.

So, the neighborhood has a sense of community, it has great San Francisco history, and less fog. As Magnolia grows into a production brewery, I find myself really drawn more to San Francisco's long manufacturing heritage, too, and the importance of preserving and promoting tangible products that are made in San Francisco. The Dogpatch, especially, has deep roots connecting to SF's manufacturing past and we'll be very honored to do a small part in writing the next chapter to that story.