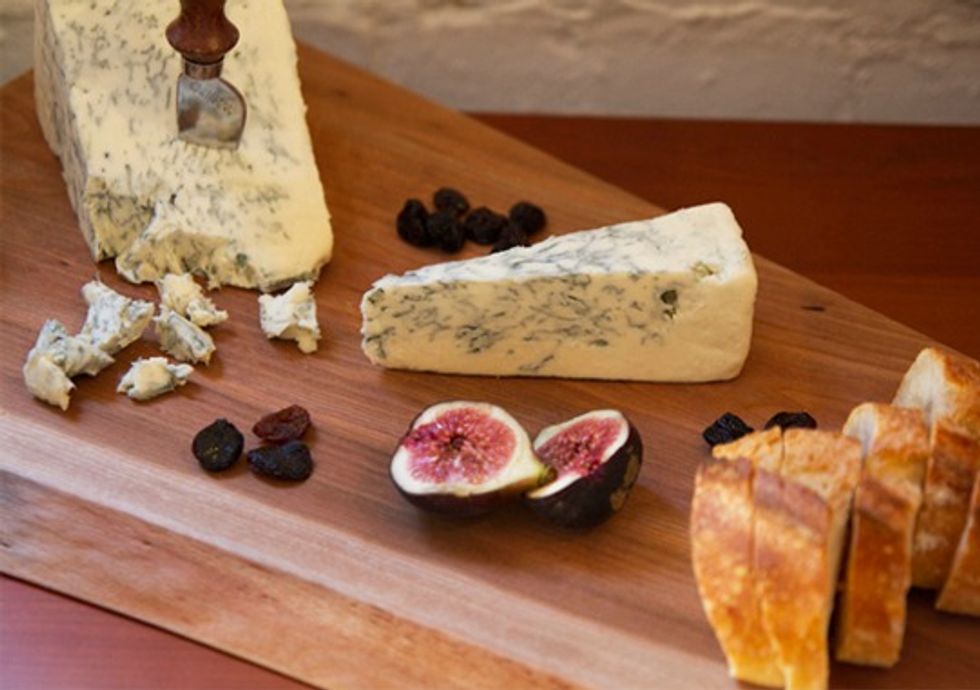 Major in Cheese at The Cheese School

Cheesemongers are great at their job if they successfully convey what the original purveyor would want us to know. The Cheese School thrives with these erudite cheese connoisseurs who teach a rotation of classes to the not nearly as cheese-educated among us. If you’re interested in expanding your knowledge of cheese, seeking a unique date idea, or crave an atypical night out with friends, The Cheese School a delightful (and delicious) didactic destination makes.

These classes are not boring. Check out their monthly schedule and you’ll have to decide between tempting options like Beginning Cheesemaking, Cheeses of the Pacific Northwest, Sake and Cheese, Zinfully Delicious: Big Wine, Big Cheese, and the list goes on. Class size is limited and allows for an intimate experience with about 30 others. The 6:30 – 8:30 p.m. time frame is ideal, and walking in, I was greeted by a glass of sparkling Cremant du Jura– not a bad idea post-work. The vibe was relaxed and grown-up as guests mingled and assembled around the table with placeholders indicating our seats. Eight cheeses were precisely arranged on plates in front of us in a delicate clockwise fashion.

“Dessert without cheese is like a beautiful woman with only one eye,” Juliana Uruburu quoted. She is the cheese director at East Bay’s The Pasta Shop and was the cheesemonger for that recent night’s Perfect Pairings. Juliana’s cheese background is no joke. She was one of the first women as well as one of the first Americans to be inducted as a Knight of Cheese by France’s elite Guild de Fromage.

Juliana’s bubbly personality is infectious as she peppers the class with personal cheese anecdotes. Her stories spanned travel, from Paris to the Pyrenées, to college dorm room meals of nothing but chicken, truffle oil, candied citrus rinds and a bottle of expensive vin jaune, the succulent white wine that transformed that particular dinner into a memorable tale.

My introduction, the 2008 French sparkling wine Domaine Labet Cremant du Jura, had a citrusy nose with bright acidic notes and tasted softer than a California-born sparkler. The Berkeley-produced 2010 Heart of Gold had the crispness of a Pinot Grigio with the full-body of a chardonnay, obviously an ideal wine for any Indian summer day. The spicy 2009 Antic Zinfandel and the very sweet and viscous Australian Hardys Whiskers Blake 8-year Tawny Port rounded out the libations.

As the class progressed, we tasted, swirled, and talked raw, pasteurized, sheep’s milk, goat’s milk, cow’s milk, moisture and texture. Juliana discussed tasting cheese at one month, at two months, and how seasons affect the flavor, and how the mood of the animals affects what they produce (hey, we already know happy cows come from California, but there’s obviously some happy shorthorns in France as well). We learned that soft cheeses have no rind, semi-hard and hard cheeses have no lactose, and that sheep, goat, and water buffalo are the most similar to the human’s digestive system, which makes their cheese often easiest to absorb. And who knew that aged cheese makes an excellent quick energy source? Forget bland trail mix, I’m taking a block of Parmesan on my next hike. Juliana’s cheese knowledge was impressive to say the least.

Butter-lovers would melt upon tasting the mushroomy Brillat-Savarin, which is 75% butterfat and tastes like eating an amazingly flavorful pat of butter (and it’s not far from that – butter itself is 80%). I was scraping my plate for more of its creaminess.

Encrusted in herbs, the Fleur Verte develops its acidic and vibrant lemony tang, and its somewhat chalky texture, because it’s derived from pasteurized goat’s milk. The strong tarragon flavor could be disliked if you’re not a fan of the herb.

The Ossau-Iraty raw sheep’s milk cheese hails from the Pyrenees and has a beautiful, supple texture and a nutty smell. It’s often strained over stinging nettles, which gives it a grassy flavor. The cheese can be paired either sweet or savory, and goes great with fruit as well as with fresh honey shaved off the comb (which, frankly, paired well with everything, honeycomb is so deliciously decadent!).

I found the alpine-style Comté to be a bit bland. The nutty raw cow’s milk cheese’s aroma dissipates quickly and oxidizes. Much preferred was the young and modern Tomme Crayeuse, a cheese invented only 10 years ago that goes great with port. Its saltiness complemented the port's sweetness seamlessly. Although, the same cheese paired with the plum pepper chutney and the sparkling Cremant also tasted divine.

Juliana shared her personal favorite, the Epoisses, a pasteurized cow’s milk cheese with a stinky terracotta rind and an aroma so much bigger than its taste. Originally created by monks in Burgandy, it pairs amazing with port, as well as a red burgundy, pinot noir, merlot, or a sweet Riesling for that matter. Juliana pondered adding it to a cheeseburger (OMG) and we listened, enraptured, and loudly scraping our plates, (as we did with the creamy Brillat-Savarin).

The king of Italian cheeses is undoubtedly Parmigiano-Reggiano. What I didn’t know was that this raw cow’s milk cheese starts with low fat milk 22% but once aged, its fat content rises to 70% as most of the moisture disappears. Red wine is the key pairing with this guy, and my Sicilian ancestors would come back to haunt me if I stated otherwise.

There are only six Stilton producers and we were fortunate to sample one, the Colston Bassett Stilton. It tasted amazing with the honeycomb and port. As a chocolate lover, I can’t believe I’m saying this, but the pairing of this Stilton with freshly shaved honeycomb and port is way better than any chocolate dessert. Allow me a moment to pinch myself to make sure I actually just said that.

Taking part in a class at The Cheese School is not only an enjoyable and affordable way to learn more about cheese, but it’s truly fascinating to meet these cheesemongers who live and work within our community, whose cheese dedication and breadth of cheese knowledge is absolutely mind-blowing. Check out The Cheese School’s schedule here.

The annual Meet the Cheesemaker event coming up on November 11th. It's a fundraiser for the California Artisan Cheese Guild and benefits the Guild and its educational programs. Eleven cheesemakers will be present including Cowgirl Creamery, Cypress Grove, and Point Reyes Farmstead. Get tickets here.