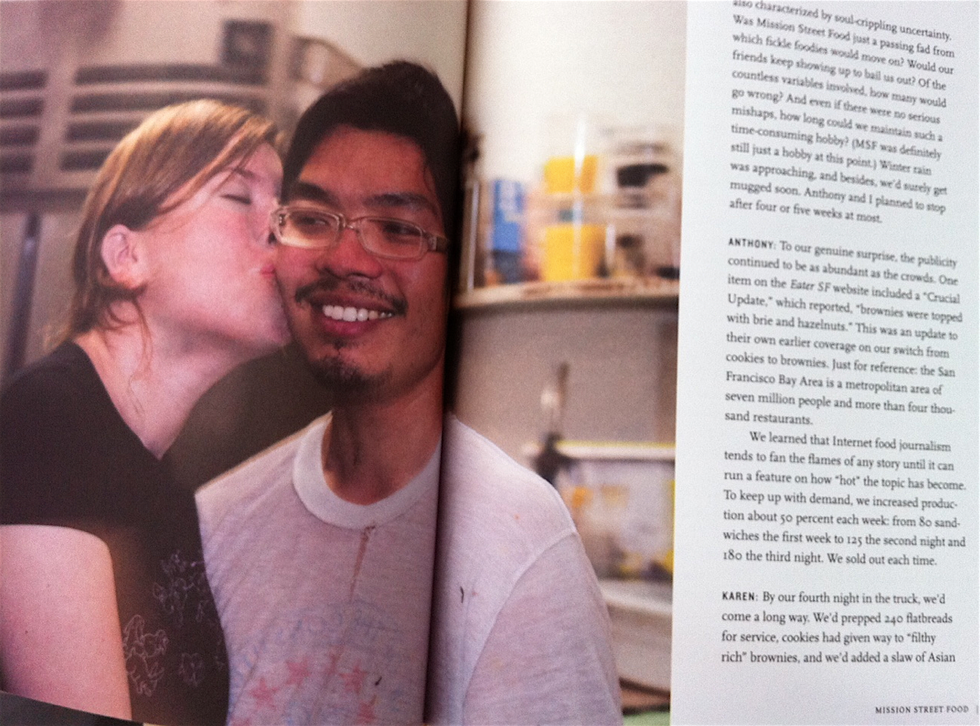 The launch for McSweeney’s Insatiable imprint—its new line of food books—is Mission Street Food, a memoir and cookbook from the little restaurant that could (and the one we now know as Mission Chinese Food). There’s something synergistic about a by-the-seat-of-its-pants food-truck-to-restaurant success story being published by a similarly independently-minded book publisher—both based in the Mission District. Neither venture has ever seemed to care about making money first which has allowed them the freedom to do quirky things like, say, have a pirate theme at 826 Valencia or start a restaurant within a restaurant.

The book, subtitled, “Recipes and Ideas from an Improbable Restaurant,” isn’t exactly that. The first half of it is actually written as a bit of an memoir alternating between the viewpoints of Anthony Myint (the founder of MSF) and his wife Karen Leibowitz, who played a big role in the opening until she leaves for a year to take a visiting professor job after getting her PhD in English from Cal. They write honestly, and often amusingly, about how little they understood what they were getting into as Mission Street Food morphed from a food truck to a cultish restaurant within Lung Shan (complete with guest chefs) to Mission Chinese Food, ultimately expanding to include their more upscale restaurant Commonwealth next door.

They write: “At its best, the scene at Lung Shan was a study in multicultural togetherness—a hippie commune offering language classes and promoting the free exchange of ideas. At its worst, it was an irreconcilably heterogeneous jumble—Asian-American chefs intruding in the kitchen and hipster youths packing the sleepy dining room.”

They speak of their reliance on new media, and how MSF was a magnet for bloggers: “[The bloggers] prioritization of blogging over actually eating, was, on the surface distasteful. But upon further consideration, we started to see ourselves as equally responsible since our menus were practically begging for documentation and commentary. Even worse, we chose our themes with an eye toward our own blog. Yes, we were sellouts.”

In pondering the best fried chicken, they tell Thomas Keller that his is not as good at Popeyes. Not to mention, "…at $52 per person it reeks of the irrational exuberance that inevitably leads to systemic collapse. Let's remember the gold standard: Popeyes' Tuesday special is a leg and thigh for $0.99 and there's a line out the door all day long."

The first half of story-telling and philosophizing—which often has a intellectual, professorial bent to it (I had to wonder if it's Leibowitz’s doing)—is followed by a sort of funky mash-up of recipes and restaurant ideas theoretically aimed at the professional cook, from how to make the Mission Burger to how to make sea foam (and that 8 servings cost $10), to an equipment list for a kitchen. I’m not sure how helpful this part of the book is, but it’s definitely in keeping with the quirky factor. There's also a mini graphic novella in the middle of it all which follows in line the book's less than linear ways.

It’s a book that I’d say would have been better if Myint and Leibowitz’s story had been allowed to age and mellow a bit more, giving it more perspective and wisdom. MSF only started in October of 2008 after all. But it definitely speaks to a lively time in San Francisco's food scene and it's an entertaining read and certainly on-trend—if not trend setting. Which is what Mission Street Food, in all its guises, has been since the start.

To celebrate MSF's release, McSweeney's is throwing a party at the Make Out Room, July 26. $7 gets you in, free beer, and yes, Popeyes chicken. $25 gets you all of that plus a copy of the book.