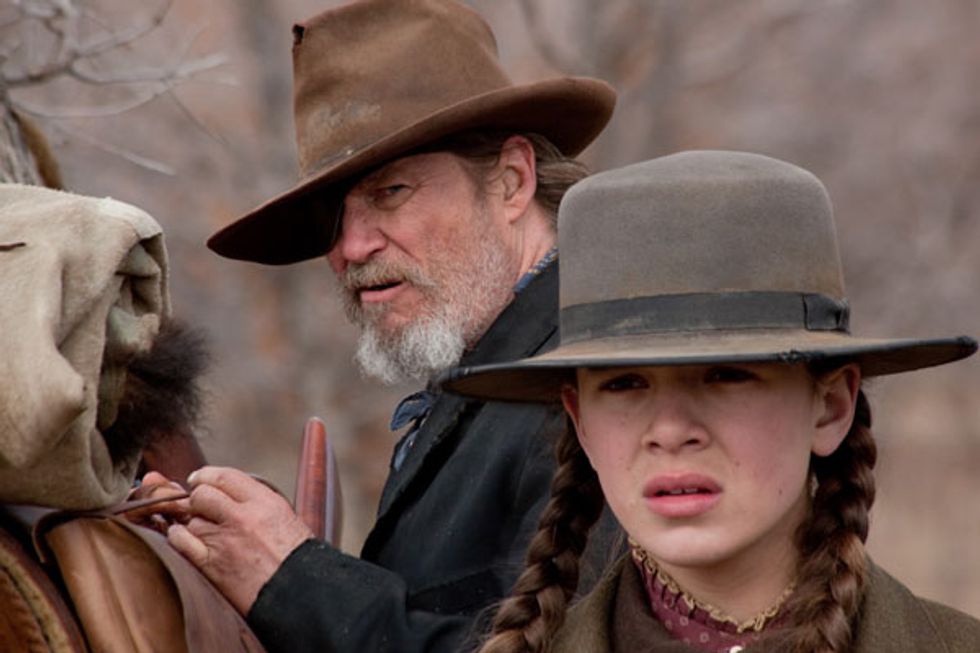 No Country for Old Cowboys: The Coens Reimagine the Classic Western 'True Grit'

You might need subtitles to understand what Jeff Bridges is growling at you in True Grit, Joel and Ethan Coen’s adaptation of the 1968 Charles Portis novel.

Here, reprising John Wayne’s 1969 role as irascible U.S. marshal “Rooster” Cogburn, Bridges doesn’t try to fill The Duke’s boots so much as he gives them a new shine, his ornery, whiskey-voiced grumblings a far cry from Wayne’s unmistakable drawl. A character actor rather than a Hollywood monument, Bridges so thoroughly cloaks himself in Cogburn’s darkness that he threatens to disappear altogether.

The same could never be said of Wayne, but the point of True Grit is not to invite comparisons. The Coens aspire to carve out their own legend, and on the strength of their potent storytelling and inspired dialogue, as well as blazing performances from Bridges and newcomer Hailee Steinfeld, they succeed.

Steinfeld plays precocious 14-year-old Mattie Ross, hungry for hard justice after the cowardly Tom Chaney (Josh Brolin) guns down her father and splits town. Giving chase, she enlists the aid of Cogburn, a notoriously unforgiving lawman, to guide her through the Indian territories and capture Chaney, ostensibly to be hanged.

Joining their journey, when he is welcome, is LaBoeuf (Matt Damon), a dapper Texas Ranger cut from much cleaner cloth than Cogburn. The two play wonderfully against each other: Damon attacks his job with the temperament of a romantic philosopher, wistfully pursuing the killer who got away. Cogburn has about as much use for his fancy chatter as he has for dental hygiene.

The Coens must have savored the ironies of Portis’ novel, with its hapless villain (imagined by LaBoeuf to be a criminal mastermind), its dangerously besotted anti-hero and, outsmarting them at every turn, Steinfeld’s unwavering teenage heroine, as clever as Cogburn is laughably condescending.

Those probing the brothers’ latest offering for some deeper meaning, perhaps something in the vein of the poetic nihilism of 2007’s No Country for Old Men, might be disappointed. This is neither a deconstruction nor a reinvention of the Western; it is, rather, a worthy addition to a venerable genre.

As such, it is a classic adventure, a road movie set in the roadless countryside, as much a black comedy as a sly meditation on violence. The Coens bring inescapable gravity to the mayhem – the gunplay is never presented as sport, but as the escalation of tensions to the point at which men break, wagering their lives against their intractable sense of honor.

There at the center is Bridges, who, as Cogburn, lets down his guard just enough to let us appreciate his humor and heart, effectively masked behind a cold eye and a guttural growl. He is Mattie’s savior and she his redemption. Together, they make the oddest of odd couples, their growing trust in each other as sweet as the cause of their union is sour.