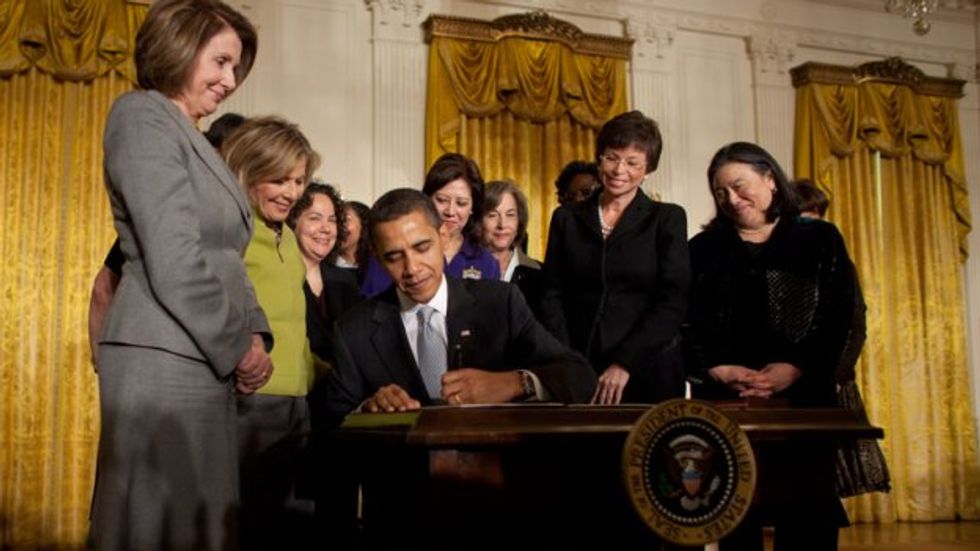 In every neighborhood where tech startups are located, you’ll see them – small groups of bright young men, mainly engineers, going out to lunch together. Very occasionally, there will be a woman who is part of the group, but that’s an exception that proves the rule.

It’s an odd phenomenon, this gender segregation, especially because virtually none of these young men fit the old-fashioned stereotype of sexists; by contrast, their generation supports equality between men and women more  than any in the past.

And as these companies grow, they hire plenty of women. At Twitter, for example, a recent estimate has women accounting for around a quarter of the workforce.

But where the paucity of women is most striking is on the boards of directors of Web 2.0 companies. In a piece last December for the Wall Street Journal, Kara Swisher documented that none of the leading companies in this sector – Twitter (9 members), Facebook (5), Zynga (5), Groupon (9) and Foursquare (3)-- had a single woman on their board!


(I can find no evidence that this has changed since then, but some of these companies do make their current board makeup hard to locate.)

In any event, we can now add another company to the zero women list, and this one has an ironic twist. Last week, while researching my post on Pandora Radio, I read the company's explanation of its name:

The name Pandora means "all gifted" in Greek. In ancient Greek mythology, Pandora received many gifts from the Gods, including the gift of music, from Apollo. She was also, as we all know, insatiably curious...

Of course, among all the Greek Gods, Pandora was also the first woman.  And, as Robin Wolaner, author of Naked in the Boardroom: A CEO Bares Her Secrets So You Can Transform Your Career, first pointed out to me, all 14 members of Pandora's soon-to-be-public board of directors are men.

If someone was keeping score for these six companies, all of which (except Groupon) are headquartered or have a major office in the super-progressive Bay Area, it would be Boys 45, Girls 0.

Swisher’s piece on this issue sparked a lot of discussion; last time I checked there were 61 comments on the article’s page. Rbrtchngwrote: “I think this ‘issue’ is silly. Maybe no women are on these boards because they did not find women with the right credentials…It’s about ability, not sexism. I mean, go to any Computer Science class or any engineering class in any universities, women are pretty sparse compared to men in this field.”

Over time, this imbalance looks to be changing. Between 1978-1998, the percentage of women engineers in the U.S. increased from two to nine percent of the total. Over the past decade, various reports indicate that roughly 20 percent of university engineering students now are women.

In addition, there are plenty of women executives who have risen to positions of prominence throughout the tech sector generally and in some of the companies named in this story specifically.

So why is there a dearth of them on the board level of top 2.0 companies? I'm fresh out of theories myself; so if you've got one please comment below...