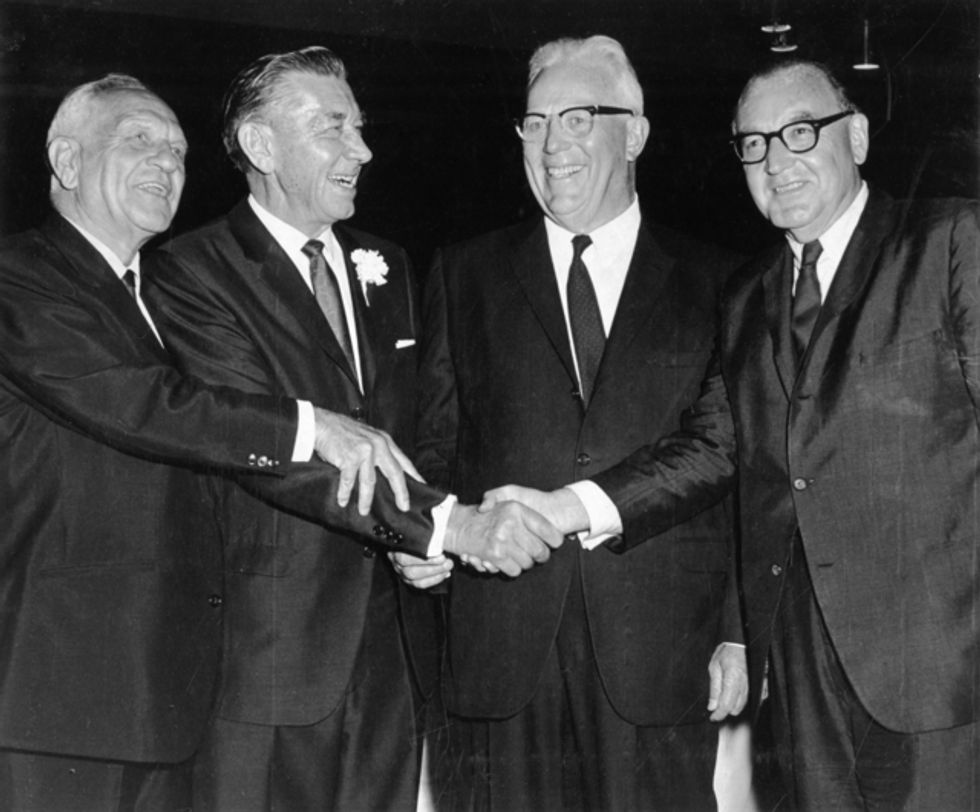 At one point during an old interview featured in California State of Mind: The Legacy of Pat Brown, the so-called “Architect of the Golden State” is asked to name California’s greatest governor – a loaded question, perhaps, considering that Brown’s son Jerry held the office at the time.

Yet Pat, a San Francisco native who steered the state from 1958 to 1967, in the process helping California avert a water crisis and championing higher education, civil rights and the Fair Housing Act, doesn’t hesitate. “Not to sound immodest, but I’d say myself,” he says, benevolently declaring his son – who in January began a third term in the office, after his previous tenure ended in 1983 – a close runner-up.

Sascha Rice – Pat’s granddaughter, Jerry’s niece and the filmmaker responsible for State of Mind – won’t even go there. “I can’t answer that question without getting into huge trouble with my family,” she says. “I suspect Jerry would hedge as well.”

Yet Rice, trying her hand as a documentarian for the first time since making her feature debut with the 2004 romantic comedy Mango Kiss, doesn’t need to reaffirm her devotion to her late grandfather, whose legacy of work for the state she calls “startling.” State of Mind, a selection at this year’s Mill Valley Film Festival that will make its area debut Tuesday night at the Christopher B. Smith Rafael Film Center in San Rafael, speaks for itself.

“I needed to remind people about what Pat accomplished because on some level I think it’s been forgotten,” Rice says. “It couldn’t be all about Jerry. The things my grandfather achieved continue to benefit California today, very directly.”

Rice always suspected she’d wind up making documentaries, but gave in to her passion for narrative fiction because she’s more comfortable shaping a story to her own satisfaction.

“I was so reluctant to get into [State of Mind] because I’m not a documentarian, and because I don’t believe most stories are told truly objectively. But lately the trend has been for filmmakers to add their own subjective voice to the story, and that made me more comfortable with the idea.

“Then I realized I was best suited to doing it,” she adds. “A biography [Ethan Rarick’s California Rising: The Life and Times of Pat Brown] came out [in 2006], and it gave you a fine history lesson, but the author didn’t communicate who my grandfather was in that intangible sense. And then I found out that he’d never met him, which didn’t surprise me.”

It was Nov. 2, 2004 – not coincidentally, the day George W. Bush was re-elected – that Rice resolved to make a movie about Pat. (Around the same time, for the same reason, her uncle Jerry returned to politics.) “I was very disillusioned,” she explains. “We seemed to be stuck in a political climate of fear and apathy, where a lot of people felt as if they didn’t matter.

“America didn’t seem to be the country I thought it was. At the time, I had no idea Jerry was going to run again, but what motivated him is what motivated me – this belief that you can’t just stay on the sidelines, you have to do something. And then Obama came and invigorated the country with this message of hope and change, but now people are growing impatient again and they think the political process is ineffective. People are disenchanted again.”

Rice acknowledges that the highs and lows of American politics are cyclical, and that it’s too easy to become disaffected when the national mood sours. She also is aware that people tend to romanticize the past, forgetting that the country of yesteryear –  like California under her grandfather’s leadership – braved similar peaks and valleys. One difference between now and then is the widespread perception of politicians as self-serving frauds.

“One of the worst insults you can use to describe someone’s character is to say they’re like a politician – they’re a liar, a cheat, they’re smarmy,” she says. “That’s new, I think, and it has a lot to do with the 24-hour media cycle. Politicians and to a lesser extent celebrities are subject to constant character assassination. The idea that you could release a story at 5 p.m. on Friday and you’d have all weekend to figure out how to game it on Monday, that’s obsolete.

“The media culture is different now. News has become entertainment, and the education of people is less of a priority than it used to be. I definitely believe there was a time when people believed more in their leaders.”

State of Mind recalls such a period, when in her view men like her grandfather respected the honor of being a public servant and subordinated their personal ambitions to the greater good. (That’s not to say the old guard was utterly devoid of self-promoting careerists who saw the California governorship as a stepping-stone to the White House: Richard Nixon pursued the office, many believe, to stamp his ticket to D.C. Against long odds, Pat put down his first attempted comeback in 1962.)

Pat – who, Rice says, gave up his own White House dreams to serve better the needs of California – did regret not running for President, but he took great pride in what he did accomplish. He recognized the state’s need for water and the long-term benefits of conservation. He implemented a progressive plan for higher education. But most important, she insists, he stayed true to an ideal.

“To me, it’s less about the specifics than the moral compass he brought to everything he did,” says the director, who is up-front about her biases, as well as her tremendous affection for her family. “Everything he did had to measure up to his standards, and if it didn’t, he made changes. He was strict with himself in that way.”

Pat was also famous for his unflagging optimism, even during the darkest hours. Does Rice share that? “Growing up in Los Angeles in the ’70s, the smog was outrageous,” she says. “We’d have smog days where we weren’t allowed to go out and play, and when you breathed you’d feel the pain in your lungs. There’s still smog in L.A., but there has been progress. Things are a little better.

“It’s hard to be an optimist. There’s a wide range of thoughts prevailing in the country that I find troubling. A huge portion of the population doesn’t believe in climate change. But I think you have to have hope. I know my grandfather did.”

California State of Mind: The Legacy of Pat Brown debuts at the Mill Valley Film Festival on Tuesday, Oct. 11, at 8 p.m. at the Christopher B. Smith Rafael Film Center in San Rafael. Director Sascha Rice and producer Hilary Armstrong will attend. For tickets, click here.