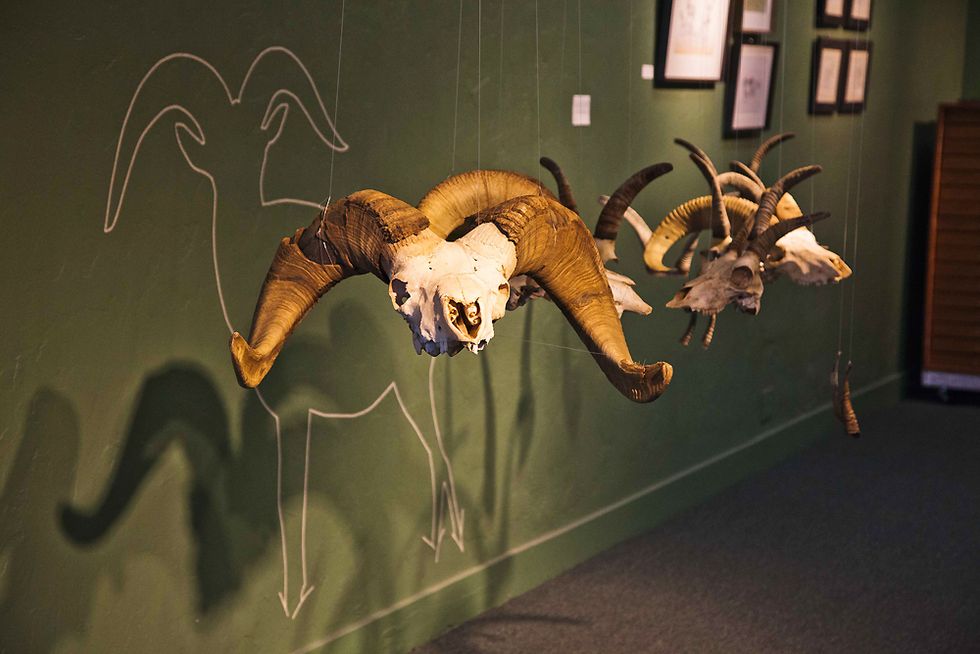 Saving Nature Through Art: Jane Kim and Her Migrating Murals

To say Jane Kim’s art is inspired by nature would be a massive understatement akin to calling the Golden Gate Bridge a structure that connects the city to Marin. The earliest manifestation of Kim’s adoration for nature took the form of home wall paintings of flowers and bears, much to the chagrin of her parents. Kim has made significant progress since then—Yosemite National Park, The Smithsonian, and the San Francisco Conservatory of Flowers are just some of the many places that have commissioned her work. As such, she has acquired the title of science illustrator. In addition, she is the founder of INK-DWELL art studio, whose central purpose is to foster love and promote advocacy of the natural world.

Kim’s upcoming exhibit, “The Art of Conservation,” at Berkeley's The Bone Room(opening Oct. 4) demonstrates her environmentally conscious sensibilities at their fullest. In the spotlight of her exhibit will be the launch of the Migrating Mural, a unique creation of science art portraying endangered animals along their migration routes. One of those actual routes, belonging to the Sierra Nevada bighorn sheep, follows a path very similar to that of highway 395, which, interestingly enough, will double as Kim’s canvas. The ambitious artist has plans to paint four life-size murals of the bighorn sheep along the highway. The first mural will be completed in Independence, CA on Oct. 20, with the other three to be finished in 2013. The Oct. 4 show will be the first public display of the mural. Here, a brief powwow with the artist about her obsession with nature.

How did you become a "science illustrator?”
I’ve always been inspired by nature and wildlife. Any time I saw interpretive signs at a park or flipped through a science journal or a beautifully illustrated field guide, I thought to myself, “I want to do that.” I flirted with the idea enough times that I finally decided to apply to a very special Science Illustration graduate program at the California State University Monterey Bay. It completely changed my life.

What are you looking to accomplish with your show at The Bone Room?
I am hoping to gain attention and momentum for INK-DWELL’s fundraising efforts for Migrating Mural via Kickstarter. In addition, I hope the show will bring a lot of exposure to The Bone Room Presents, members to The Sierra Nevada Bighorn Sheep Foundation, and support of The California Department of Fish and Game’s Sierra Nevada Bighorn Sheep Recovery Program.

What's an interesting fact about the bighorn sheep?
You can tell the age of a bighorn by the rings on their horns—just like you would with a tree! And speaking of horns, Sierra Nevada bighorn sheeps' horns have a very unique shape. They splay outward as they curl rather than spiraling inward.

Where on the highway will you be painting the murals?
I will be painting the murals on buildings/structures along Highway 395 in the shadows of the Eastern Sierras. Each site is easily visible from the highway, and in most cases, they are businesses that welcome travelers. The southernmost location is in Olancha, CA on the facade that connects Gus's Really Good Fresh Jerky and Adriana's Cafe. I encourage people to try the jerky and have a very authentic Mexican meal. Heading northbound on 395 (about 40 miles from Olancha), the next site is in a town called Independence, CA. There, I will paint the very first mural on the Mt. Williamson Motel. Mt. Williamson is not only a namesake for the motel but also for the Mt. Williamson Herd Unit. The Bishop Gun Club, about 45 miles from Independence, is next. Finally, there's a stop in the town of Lee Vining, CA, another 60 miles north of Bishop. I'm currently securing a site here.

What do you have on your plate in the future?
After Migrating Mural Chapter One: Sierra Nevada Bighorn Sheep, I will begin a 60-foot mural of the evolution of birds for the Cornell Lab of Ornithology’s visitor center. The mural will begin 400 million years ago and end with all of today’s bird families. There will be well over 300 animals included in this mural! It’s a 12-18 month project.

What are you favorite places in the Bay Area?
If you're looking for something relatively close, I'd say go to Las Trampas Regional Wilderness. It has incredible lookout points where you can see San Francisco in all its glory. But make sure you go off trail and explore—waterfalls, moss, and lush terrain abound.