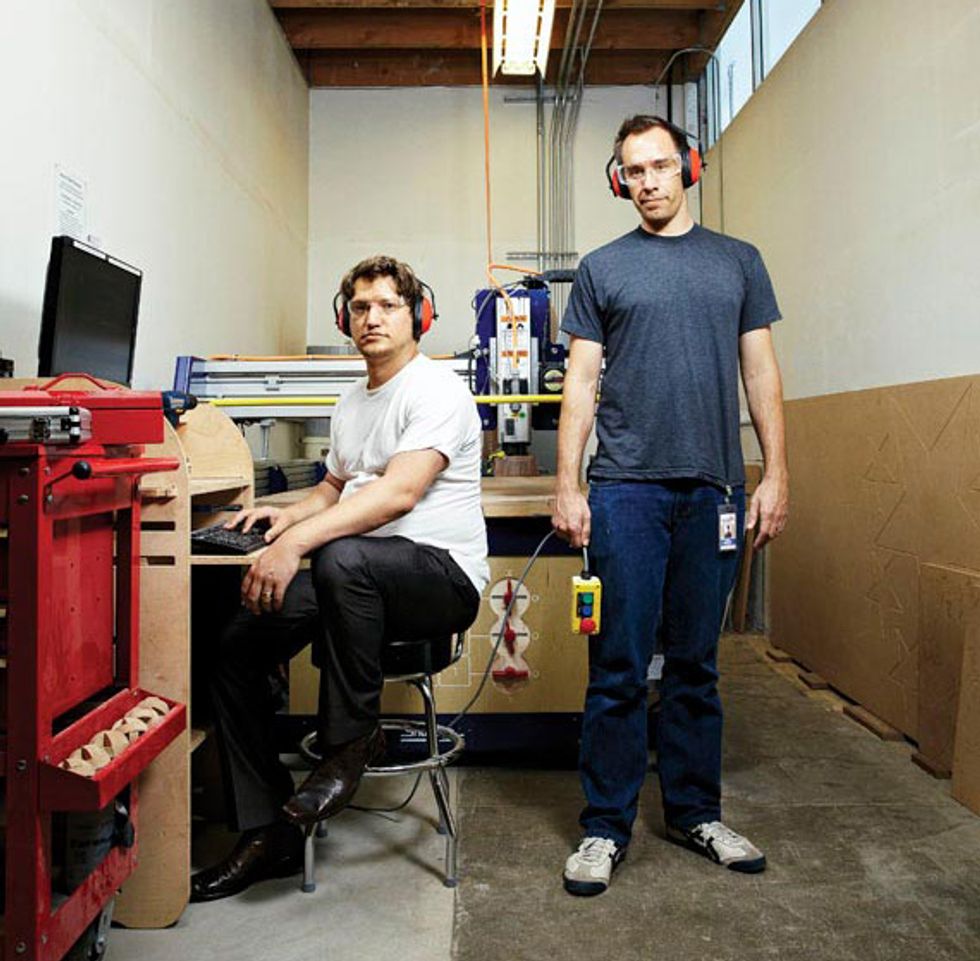 It’s 10:30 p.m. on a Monday, and SoMa’s TechShop is buzzing with activity. Sparks are flying, the band saw is kicking up dust, and nerdy hipsters are in the conference room plotting prototypes. The creative energy filling the raw industrial space is palpable, and the brainpower is suffocating. The vision of former MythBusters science adviser and serial entrepreneur Jim Newton, TechShop is a membership-based workshop and fabrication studio filled with the kind of equipment you haven’t seen since high school shop class—only much more sophisticated and high tech. An avid maker himself, Newton wanted to build a space for fellow do-it-yourself buffs. The Bay Area has always had a robust community of artisans and has long been an incubator for the DIY movement, but there’s little access to the tools and machinery needed for larger-scale, more ambitious projects. In 2006, Newton’s dream was realized, and the first TechShop opened its doors in Menlo Park. After near-instant success, the business expanded, opening locations in San Francisco and San Jose earlier this year.

The 17,000-square-foot space at Howard and Fifth streets has more than $1 million worth of equipment and software—think laser cutters, drill presses, 3-D printers, and industrial sewing machines—for its 700-plus members. A walk around the ground floor requires safety glasses. Hobby designers, after-hours artists, and would-be inventors work on milling machines, welders, computer numerically controlled (CNC) routers, chop saws, and woodworking tools to build everything from furniture and sculptures to motorcycles and fixed-gear bikes. Upstairs, the mood is more mellow. There are several computer-aided-design (CAD) workstations, silkscreen presses, a vinyl cutter, a fashion design area, an electronics room, and the aforementioned laser cutters—perhaps the most popular tools in the shop. Anton Willis, a member at TechShop SF since its opening in February, used one of the laser cutters to build parts for his latest fold-up kayak prototypes. “I came up with the idea after moving into a studio in the city,” Willis says. “There was no room to store my 16-foot kayak, so I was determined to come up with a solution that could fit in my apartment and be easily transported on BART. I was reading an article about origami’s progressions over the last 10 years—that’s when I hatched the idea.” Willis recently finished the 12th model of his Oru kayak and is ready to go to market with his invention.

On any given day, you can walk into TechShop and hear a handful of stories like this. Artists, designers, and architects work alongside engineers, scientists, and entrepreneurs. Trained architects by day, Chris Chalmers and Charles Lee were called on by design firm Visible Research Office to devise and fabricate a project for their alma mater, California College of the Arts. The two worked on a three-dimensional canopy installation named the Aortic Arc (because of its resemblance to a portion of the human heart) at TechShop Menlo Park. The design was unveiled in 2009 to much critical praise—it won last year’s American Institute of Architects’ California Council Small Projects of the Year Award and was short-listed for this year’s Institution of Structural Engineers’ Structural Awards. Over the course of the project, the two cofounded BIOS Design Collective, which focuses on the intersection of architecture, technology, and biology. Plans for an interactive installation called Coloniatechne are already in the works, as are plans for Chalmers’ line of customized lamps, Fabripod, which will, of course, be developed at TechShop SF.

Lee and Chalmers are evidence that TechShop caters to just as many professionals as it does after-hours hobbyists. For startups and even large, established companies, TechShop is a boon—its facilities enable people to move from concept to design to prototype to manufacturing in a fraction of the time and for much less money than it would traditionally require. “There’s a huge benefit to having this place in the city,” says Chalmers. “It gives us the time to focus on creativity instead of having to think about machine maintenance.” As you might imagine, overhead and upkeep for these kinds of tools is astounding. “Even well-equipped private shops wouldn’t have access to such a vast amount of high-quality tools and classes,” Willis says. Dabblers and skilled artisans alike get top-notch training through more than 75 classes, which are offered to both members and nonmembers.

As a TechShop coach and member, it’s Laura Stevenson’s goal to take every class the SF location offers before her first year there is up. When she’s not advising members, she’s toiling on prototypes for her side project, Oyo Glasses, which she cofounded with former software consultant Michael Righi. Together, the two share a love for eyewear but suffered from the same problem: never finding the right fit. Their recently launched custom eyeglass website employs software that shapes frames to users’ faces based on personal photographs. Users choose from templates or design their own, and then frames are individually manufactured with CNC machines or 3-D printers, which fuse together layers of material to create three-dimensional objects. Stevenson’s inner geek comes out as she shares her excitement about the startup. “I have such a love for glasses,” she says. “They’re the perfect intersection of fashion, medical device, and ergonomics.”

Success stories like these are rampant at TechShop. The prototype for DODOcase’s sleek and lauded iPad case, for example, was created here and has helped sustain the old-world craft of bookbinding. And Square, the venture led by Twitter cofounder Jack Dorsey, partially developed its mobile credit card reader here. TechShop fosters the kind of creative cross-pollination that lures brilliant minds, the kind that enjoy nothing more than getting their hands dirty. “It’s all about combining open source and computer programming with more traditional craft-driven creations,” says Chalmers. “The DIY movement in the Bay Area is at a point of critical mass.” And the proof is in the products.