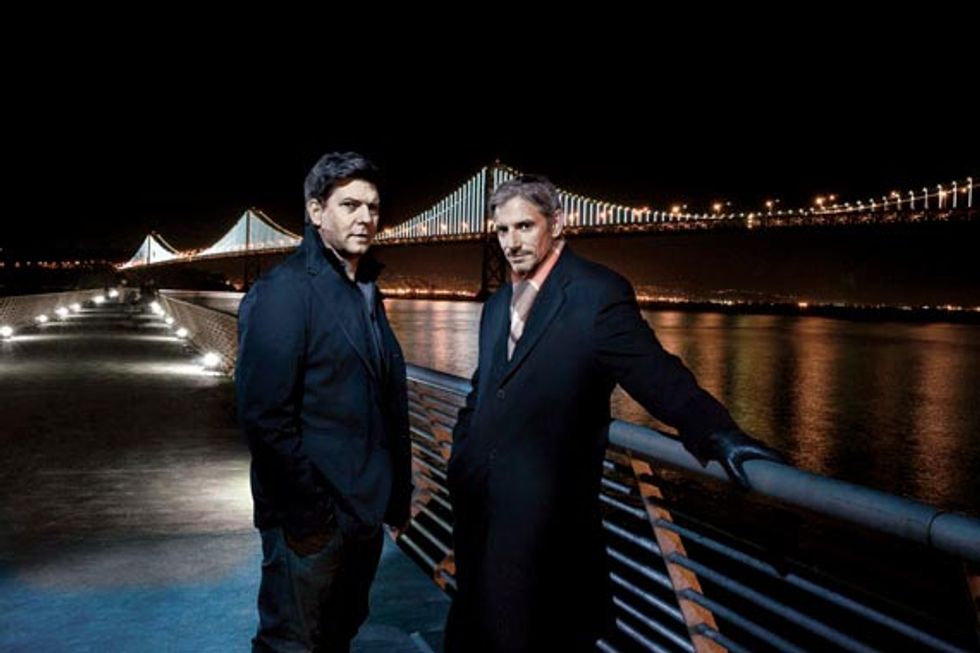 Now that we've all basked in its glory, it's time to learn how the magic of The Bay Lightscame to be.

What was the lightbulb moment for The Bay Lights?
Leo Villareal: Ben had been thinking about how the Bay Bridge could be activated for its 75th anniversary. Dorka Keehn (of the SF Arts Commission) had seen my 2010 survey show in San Jose and sent him a picture of it. She told me, “It’s kind of a crazy idea, but I know this guy named Ben…”

Ben Davis: I’d been working on the Bay Bridge project from a communications point of view. After Burning Man in 2010, I was exhilarated by this “city” of 50,000 people coming together and working beautifully. I wanted to bring that awe to a place where it could live a little longer. Then it clicked—this bridge could be a canvas. When I looked at Leo’s work, the hair  on the back of my neck stood up. Only one artist was considered for this work. And it was Leo Villareal.

What were some of the hurdles you faced to make the project a reality?
BD: There were three levels of impossibility: Permitting, fundraising (because we committed to private funding early on), and technology. It’s one thing to make a nice rendering, but it’s another to bring it to the real world. There was one moment, in a big bureaucratic meeting, when this thing just about blew up. I heard a fist pound the table, and someone said, “No, damn it! We want to make it happen.”

What were the fundraising challenges?
BD: Part of this work is our willingness to succeed or fail based  on integrity. At one point, we were offered a $3 million sponsorship. But the sponsor requested its name in the lights. The answer was a clear no.
LV: I reached out to everyone I know. Because this project is so closely identified with the Bay Area, is was difficult to get [outsiders] excited about it.

Leo, your first work with lights occurred at Burning Man as a practical way to navigate back to your tent at night. What was your journey from Burning Man to The Bay Lights?
LV: [Burning Man] was certainly the seed. The key moment was the combination of light and soft wire. Putting those things together solved this “new media artist” problem of being stuck on a screen or projection. With light, I’m able to make pieces  that are impactful and deal with scale. I started at the very  bottom and built my way up. It’s great to be able to work at  this end of the spectrum.

You’ve said you don’t want your work  to be seen as merely a light show.  What makes The Bay Lights different?
LV: The care with which it’s created. The tools I’m using are custom-built over several years. I spend a tremendous amount of time tuning them and making them appropriate to their locations. In Las Vegas or Times Square, [light shows] loop every minute. My pieces dynamically reshuffle. I’m dealing with abstraction.

You describe the work as being iconic.  What is it iconic of?
LV: Here, the bridges themselves are icons. So, we’re augmenting that fact with another layer that brings light, art, and technology into the mix, which are all things that I think are very important to the Bay Area. I think The Bay Lights will unleash other work around the city, and I think that there is a role for the tech community to play as patrons of the arts—they are largely the people who have the ability to really do something for the city.

Some public art installations have taken on symbolic status in their cities, like Anish Kapoor’s Cloud Gate in Chicago’s Millennium Park. Others are ultimately torn down. How do you see The Bay Lights figuring into the history of public art?
LV: Public art has the ability to inspire economic activity, and I believe this project will bring more [to San Francisco] than it cost. It’s a major gift to the city, and I’m interested in connecting with the [estimated] 50 million people who will see it over the next two years.