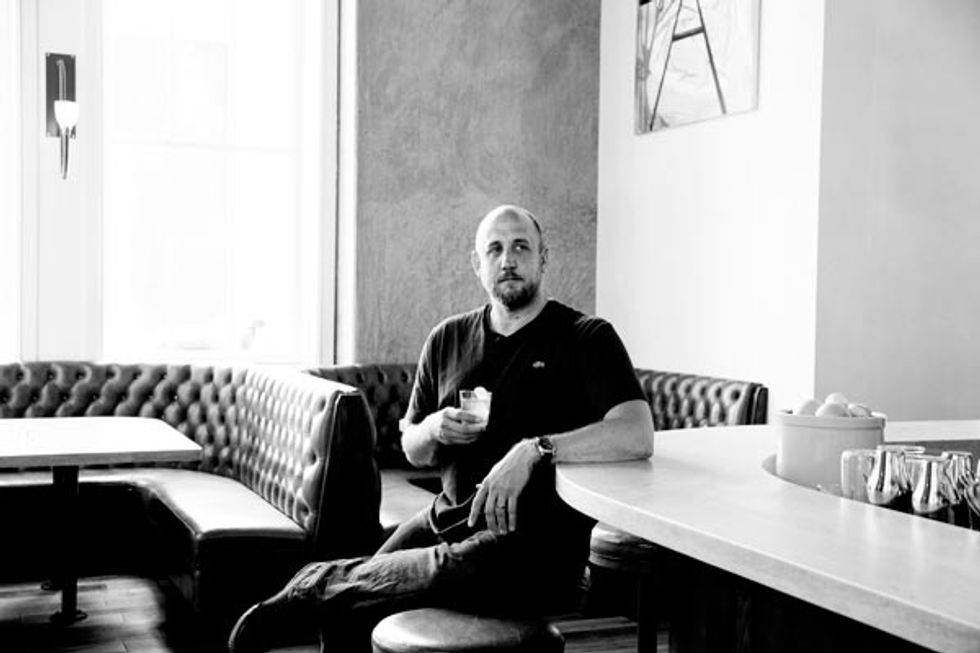 To appreciate Thad Vogler's commitment to craft spirits, heritage cocktails, and the art of thoughtful bartending, you must witness him eat an apple.

Measuring 6 feet 8 inches, the renowned liquor authority has the strong carriage of, he says, a horse, and thus tackles his fruit accordingly. “The first time I ever saw Thad eat an apple, it was a revelation," says Jon Santer, owner of the Prizefighter bar in Emeryville. “One second it was in his hand, and then suddenly it had vanished. Core, stem, everything. When Thad's in, man, he's in."

When you walk into one of Vogler's establishments—Bar Agricole or downtown newcomer Trou Normand—you won't find bottles with recognizable beverage insignias. No Budweiser, no Jameson, no Coca-Cola. (Interestingly, as a child growing up in Santa Cruz, he collected such cheap-liquor labels as Seagram's Seven and Gordon's Gin, soaking the bottles before meticulously peeling the labels off and displaying them on a piece of cardboard—perhaps foreshadowing his future blacklist?) Vogler's disdain for global liquor conglomerates, such as Bacardi (Dewar's, Grey Goose) and Diageo (Johnnie Walker, Ketel One), is legendary in this town of slow food disciples, who deem artisanal anything mandatory consumption.

“Bacardi is making millions, maybe even billions, of gallons of rum. Where in the world is all that molasses coming from? If you increase production exponentially, quality has to fall," says Vogler, 44, who began his bartending career while studying literature at Yale in the late 1980s—he poured cheap wine and humdrum G&Ts at the campus repertory theater. “There's nothing wrong with eating at Arby's or cracking open a PBR once in a while—I get it. But people in the Bay Area would never eat the way they drink if they knew about all the truckloads of caramel coloring and industrial sweeteners and foreign crops being used by big liquor companies. They're destroying regionalism."

Because of this, Vogler stocks his bars exclusively with little-known, small-batch spirits that possess a strong sense of history and place. Dudognon cognac, for instance, has been brewed, sans artificial additives, by the same family in southwestern France since 1776. And the Camut clan uses only apples that have been grown on their 115 acres in Normandy to make its calvados brandy. (A splash of calvados, called a trou normand, is traditionally sipped between meal courses to cleanse the palate.) Agricole rum, made from fresh sugar cane rather than copious volumes of molasses, is a particular favorite of Vogler's. In 2010, he named his first restaurant after it. And when he volunteered to serve his favorite cocktail—incidentally, he doesn't invent cocktails, but rather adapts time-tested recipes from different cultures as well as antique books—at the James Beard Awards in 2012, he chose 'Ti Punch, a simple Caribbean concoction of agricole, lime peel, and sugar. But before Vogler could pour a drop, he was stopped in his well-intentioned tracks by one of the event sponsors, Bacardi.As a result, Vogler can't help but question the legitimacy of the Beards—“Can we really call it the defining event that celebrates food and wine and liquor diversity?" he wonders—even though Bar Agricole has been nominated for Outstanding Bar Program several years running, and even won for Outstanding Restaurant Design in 2011. (Fist bump to San Francisco–based Aidlin Darling Design for the architecture and to local glass artist Nikolas Weinstein for the dramatic sculptures suspended from the skylights.) Longtime cohort Erik Adkins, bar director at Charles Phan's Slanted Door Group, puts Vogler's frustration into perspective: “At a time when the world's liquor is dominated by corporate giants who industrially manufacture spirits and spend millions of dollars on advertising, Thad's ethics are revolutionary." A VP of sales at a local liquor distributor, unhinged by Vogler's uncompromising standards, once remarked to Santer, “That guy is ruining this business."

Overreact, much? Think of it this way: If Vogler is to spirits what Blue Bottle's James Freeman or Four Barrel's Jeremy Tooker is to third-wave coffee, then yes, a pioneering, craft distillery-focused approach to bar programs isn't going to go over well with liquor leviathans. But just as Starbucks, with its nearly 20,000 stores the world over, isn't exactly jittery over Blue Bottle's 13 cafes in SF and New York City, in the scheme of planetary domination, Vogler is probably more of a nuisance than an actual DEFCON-level threat.

Luckily, such distinctions are inconsequential to him. What matters, he says, is that his work is heartfelt. “This industry is populated with people who think they should be doing something better with their lives," says Vogler. “For me, this is doing something better with my life." Vogler waxes rhapsodic when he speaks about the way agricole rum, made in the vein of Armagnac, is crafted on the Caribbean island of Martinique by fermenting sugar cane and then distilling it into rum. “The French are very particular about their agriculture, so the cane is grown, harvested, pressed, and fermented in a very thoughtful way," says Vogler. (As a frame of reference, Vogler is only almost as rhapsodic when he talks about his two British Blue Shorthair cats, Champ and Sugar, or Celine Dion's “It's All Coming Back to Me Now," or the extraordinary talent on So You Think You Can Dance. Of the last, he says, “Tears. I always have tears." Teddy bear.)

The Whist Cocktail is an elegant medley of aged rum, calvados, and sweet vermouth.

The result is rum that's both vegetal and grassy, savory and sweet. Cuban rum, on the other hand, is drier but no less complex. Vogler grew fond of it while studying Spanish at the University of Havana in 2003. To this day, a simple daiquiri—Cuban rum, lime, and sugar—is the drink he'll make for himself and his wife, Katherine, in the comfort of their Mission flat, to accompany their favorite dish of red beans and coconut rice. It's the meal they subsisted on when they met and fell in love in Guatemala in 2005, while they were volunteers building houses for a nonprofit called Common Hope. It's the meal Vogler wants to homage in a New York City eatery he hopes to open one day.

With the exception of that year-long stint in Latin America and a subsequent short spell in finance at Oracle—about which he minces no words: “It sucked"—Vogler has made a living as a bartender since 1988, working in such far-flung destinations as Paris and Tokyo and Portrush, a coastal town north of Belfast. Plenty of time to develop a comprehensive manifesto, “31 Rules of Bartending," which includes obvious principles, such as “No fingers in glasses," plus some not-so-obvious tenets, such as “Don't point."

When it comes to his own criteria, Vogler the renegade is a law-abiding citizen.“Use jiggers always" and “Don't ever pour on the backbar"—are Nos. 7 and 8, respectively, on his official bartending manifesto.

Vogler easily reforms naive or even apathetic drinkers into believers by preaching his artisanal modus operandi; these converts include potential members of his staff and perhaps the people running the bars he's helped design (the Slanted Door, Camino, Jardinière, Presidio Social Club, and Beretta, among others). But when they get their hands on this playbook for mindful bartending, lifelong disciples are made. “Thad is decisive and direct. He creates intrigue," says his wife, Katherine Vogler, a nurse-practitioner. “He attracts very loyal friends and employees." Arguably, this kind of magnetism comes in handy when leading a revolution.

That said, Vogler is the first to admit that the craft cocktail movement is ripe for mimicry, as evidenced by gold rush–inspired barkeeps sporting handlebar mustaches, or Smirnoff's recent “Deconstructed Martini" television commercials, in which a cocktail of vodka, muddled cardamom, “slapped" sage, and water from the Library of Congress is humorously concocted. Of the farm-fresh cocktail trend, he says, “Bartenders aren't chefs. We should be more like curators or librarians, not creative forces." And he reaches a threshold at the mere mention of the word mixologist. “It's like you're trying to dress up a turd," Vogler says. “I'm just a bartender."

2. Don't touch your face, hair, or anything else that will leave your hands dirty.

3. No fingers in glasses.

4. No hands over the tops of glasses—handle glasses by the stems.

5. Don't tuck towels into your waist. Have a consistent place for towels.

6. Use a clean cocktail napkin under every drink, even if it's water.

8. Don't ever pour on the back bar or into a glass in your hand.

9. Pour wine in front of, and in the direction of, the guest.

10. Taste all new bottles of wine that are being served by the glass.

11. When serving wine by the bottle, pour guests only half a glass.

12. Shake at right shoulder, with two hands, one drink at a time.

14. All bottles on the bar top should have labels facing the guest.

16. No pour spouts on bottles on the back bar.

17. Place things gently on counters, on the bar top, and in the trash.

18. Aim to make as little noise as possible when placing empty bottles in the recycling bins and when returning the bar bottles to the speed rails.

19. The back bar is the blood pressure of the bar: Is it packed and beautiful? Does everything have a place? Is there clutter? Is it being wiped down daily? Are bottles being cleaned?

20. Same goes for the condition of the bar top: It has to be immaculate at all times. It is the single most important gauge of the quality of service in a bar.

21. Interact with your guest with service, not with conversation. What are you doing for this person right now?

22. Every time you approach a guest, give service— clean, offer, remove, or pour water.

23. Repeat to guests what they are drinking when you place their drinks in front of them.

24. When speaking with a coworker, face the bar— don't turn your back to the guests.

27. Don't point. Gesture with an open hand, and only if you must.

28. We are friendly servants, not friends who serve.

30. Treat guests and coworkers kindly. Remember to treat diners in the way you would want your mother or your friends treated.

31. The check is always the last thing to be cleared away.

Want more Thad? The restaurateur and veteran bartender made us a cocktail of his favorite things to do, see, and eat in the Bay Area.