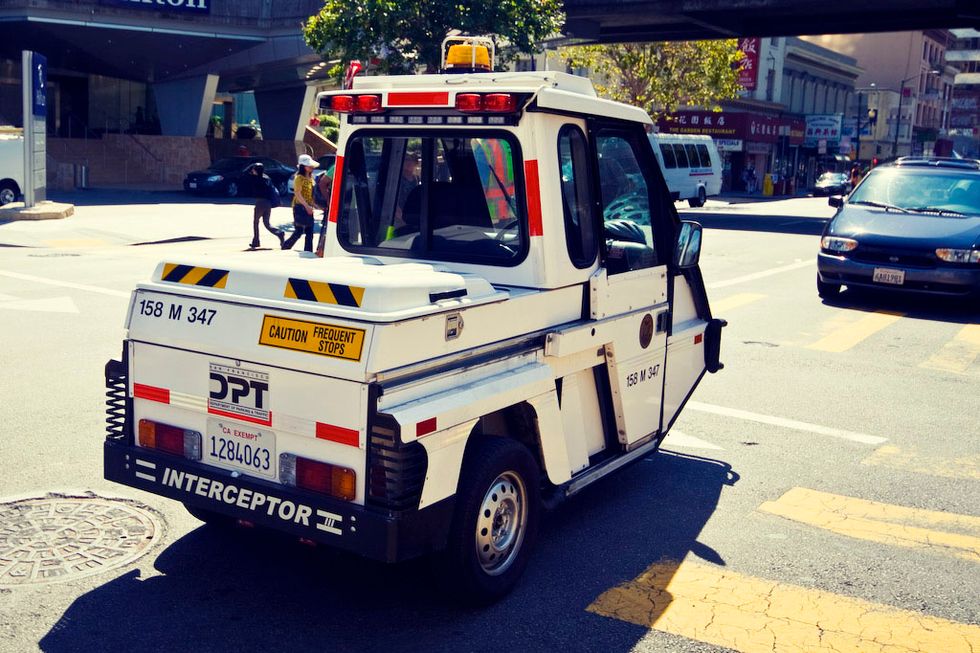 I was driving down 5th Street the other day at 4:30 p.m. I noticed that I was being followed by a parking enforcement person. I kept checking my rear view mirror. She kept following me for about half a mile. I do have a couple of unpaid parking tickets, so at first I thought maybe she was chasing me because of these. I finally lost her at the red light.

Then I remembered something you wrote about a commuter lane. You mentioned that “Commuter Lanes” were not enforced on certain holidays. It wasn't a holiday. What exactly is a commuter lane? Was I driving in a commuter lane illegally, because I was coming from my apartment and not from work? Was I doing something illegal? Thanks for all of your information about parking in the past, and thanks for your advice on this in advance.

From your description, it doesn’t sound like you were doing anything illegal. Parking Enforcement Officers won't ever chase after you for a couple of unpaid parking tickets. After you accumulate five unpaid tickets, somebody from SFMTA quietly and unromantically clamping a Denver Boot onto one of your vehicle's wheels will take care of it quite nicely, without the need for a low-speed chase across the City.

Parking in these lanes is typically allowed from 9 a.m. - 3 p.m. and disallowed from 7-9 a.m. and 3 or 4 p.m. - 7 p.m. These lanes are not only for commuters. SFMTA will not cite you for driving in a commuter lane if you are unemployed, or otherwise driving in the lane for personal reasons and not commuting to and from work. I think the parking officer was simply making the rounds to be sure that the lane remained clear.

If you were to have parked or stopped in that lane and were thereby blocking the flow of traffic, you most definitely would have been encouraged to move along.

These lanes are well enforced. At 7:00 a.m. and 3:00 a.m. (your local commuter lane times may vary), the SFMTA three-wheelers cruise along these lanes with a line of tow trucks behind them clearing the path. If you park here during posted tow away times, a violation will cost you a minimum of $500, as you will not only receive a ticket, but will also be promptly towed.  And, justifiably so, because just one car blocking one of these lanes can potentially adversely affect the flow of traffic for thousands of drivers and bicyclists.

So, for your fellow citizens, and for your own monetary purposes, it is best to be aware of these lanes. How do you know where commuter lanes are?  When you park, look ahead of your spot and behind your spot for 100 feet in each direction for any parking restriction signs. A commuter tow-away zone will have a sign that looks like the one below.

Good Luck, and I hope you will now drive and breathe easier.