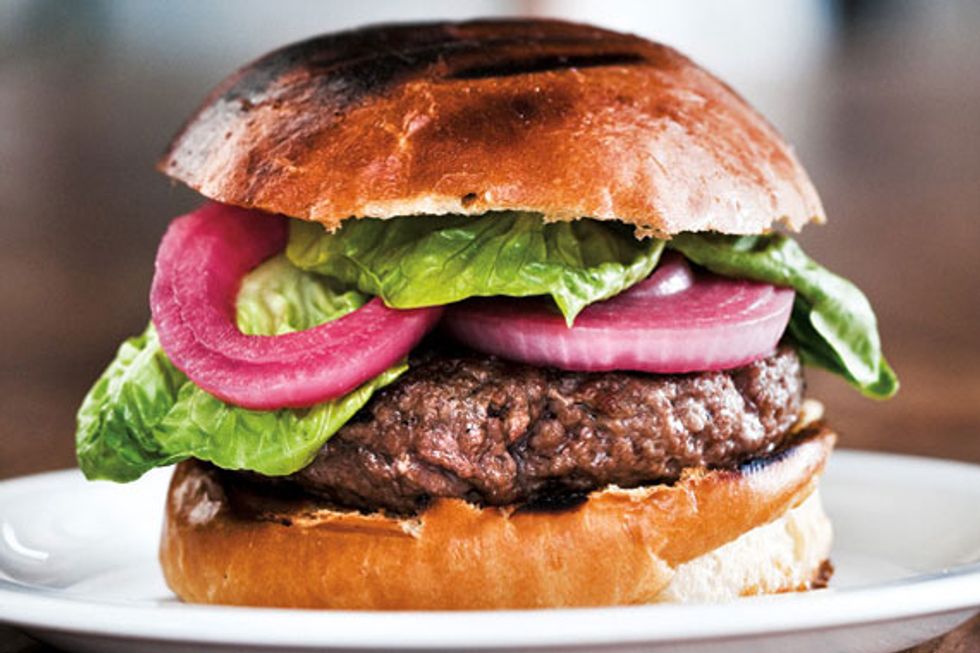 The Most Freakishly Delicious Cheeseburgers in San Francisco

That most all-American of sandwiches is a bit of lab rat here in San Francisco, where creative chefs test and try, test and try until they find just the right twist on the classic to arrive at their own signature cheeseburger. With so much culinary talent here, it’s tough to choose our favorites. But, of course, someone’s got to do it. Here are our carefully taste-tested picks for the eight most bomb cheeseburgers in SF.

One of our favorite things to do in life is to grab a Nopa burger before catching a show at The Independent. Marin Sun Farms' grass-fed chuck is ground in house daily for the thick 7-ounce pucks that are flame-grilled to perfection and served on grilled housemade brioche. Gruyere and blue cheese are both on the table, but we recommend going old-school cheddar. It’s a mouthful of meaty, cheesy goodness, with a side of  and little gems if you must.  //  Nopa, 560 Divisadero St. (NoPa), nopasf.com

Who wouldn't want to sink their teeth into this quarter-pound of freshly ground grass-fed beef topped with melty gruyere, crunchy iceburg lettuce, and ever-so-thin slices of red onion? If you think it's not fancy enough, look no further than the sesame-and black-onion-seed-speckled buttery brioche buns. Oh yeah. According to purveyor Ryan Farr, 4505 has sold 60,000 of these babies already this year, whether at festivals, farmers markets, or the restaurant on Divis. They call it the ‘Best Damn Grass Fed Cheeseburger’ for a reason.  //  4505 Meats, 705 Divisadero St. (NoPa), 4505meats.com

Newcomer to 7x7's Big Eat this year, Causwells' Americana burger satisfies our deepest, innermost cravings. Two four-ounce patties of custom-ground 5 Dot Ranch beef are formed into balls then smashed into a screaming-hot griddle for a salty, magically crispy crust. Two slices of Kraft American cheese (not kidding) lends the melt-factor in a burger that you might think of as the grown-up version of the middle school cafeteria's. Look for a slightly smaller yet equally delicious version at Causells' next restaurant, Popsons, slated to open in the Warfield building early next year.  //  Causwells, 2346 Chestnut St (Marina), causwells.com

Wes Rowe has been holding his weekly Wednesday WesBurger pop-ups at Mojo Bicycle Café on Divisadero for two years running. Each week, burger styles vary, but all share one thing in common: 100 percent custom-ground brisket. Oh hello. We're bizarrely smitten with Rowe's Oklahoma burger, in which almost an entire yellow onion is thinly sliced and smashed into the patty, its flavor seeping into the meat. Topped with a slice of American cheese and served with pickles, this Bible Belt burger is everything. Rowe is planning to open a brick-and-mortar restaurant on Mission and 18th next spring.  //  WesBurger Burger (pop-up), facebook.com/thewesburger

We have just two heavenly words for you: PImento. Cheese. Chef Kevin Cimino, who worked with Christopher Kronner during the burger buff's days at Bar Tartine, pays tribute to his childhood in North Carolina with his grandma's recipe for pimento cheese—the most devilish combination of cheese, fat, acid, and spice. Add grilled red onions, housemade pickles, and a homemade sweet potato bun, and you have yourself one of the lipsmackingest burgers to grace SF lately. ABV is also a newcomer to our Big Eat this year.  //  ABV, 3174 16th St. (Mission), abvsf.com

When you bite into a Marlowe Burger, you know that something's different. Hint: It's the lamb. Chef Jennifer Puccio gives her 80 percent Niman Ranch beef patties, which clock in at 5.5 ounces, a special kick with 20 percent lamb for a bit of unexpected flavor. She cuts the richness with spicy horseradish aioli. But that's not all: Crispy bacon also joins the party. Not that it's necessary—this meat could stand and walk you home on its own.  //  Marlowe, 500 Brannan St. (SoMa), marlowesf.com

You can call it a beast, but this sando made of 100 percent American Wagyu, from Masami Ranch, is a thing of beauty. Think high marbling and deep, complex flavor, which is accentuated with a generous helping of salt, pepper, and coriander. The burger is seared to medium to properly render all the fat, which gives more (much welcomed) chew than its peers. It’s sort of like biting into a nice piece of steak.  //  The Whole Beast at The Hall, 1028 Market St. (Mid-Market), thewholebeast.com

Count on the genius of Anthony Myint to draw on the brilliance of British chef Heston Blumenthal to create the Mission Burger, which uses a super labor-intensive Modernist technique on a custom blend of brisket, short rib, and chuck to create a “granulated” patty. What this means to you? Taste and texture like none other. A topping of caramelized onions adds a bit of sweetness, while melted Monterey jack, an Acme pan di mie bun, and tangy caper aioli tie it all together.  //  3176 17th St, San Francisco, missionbowlingclub.com