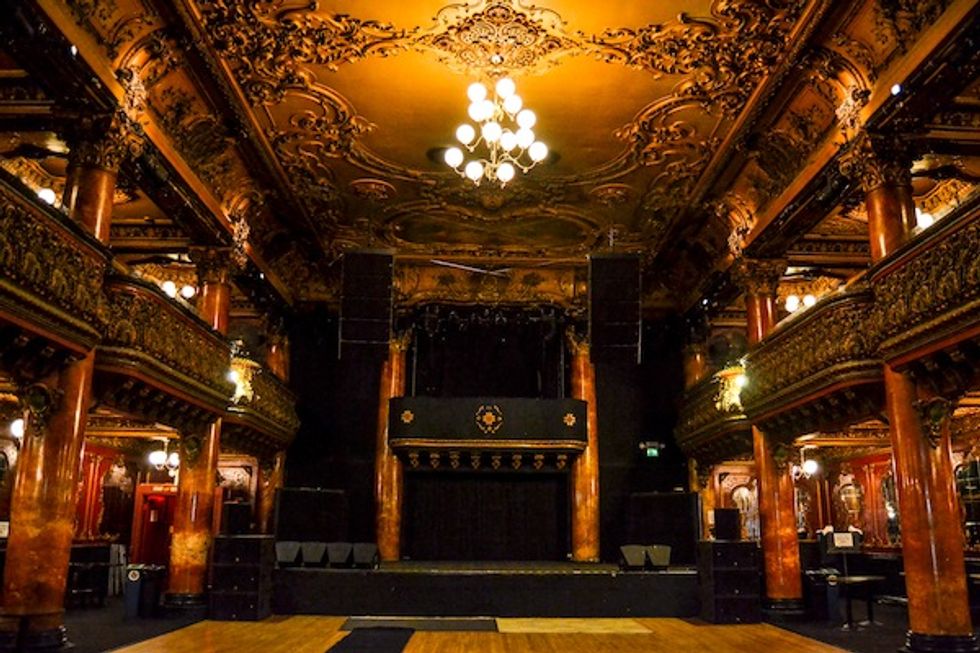 The Scandalous History Behind The Great American Music Hall

The space at 859 O’Farrell Street has a past ripened by prostitution, crooked politicians, jazz musicians, and a rather enterprising burlesque dancer—not that anyone would be surprised to hear that. San Francisco has never been short on colorful characters, and taking one look at the spiraling rococo influences and towering, gilded columns adorning the interior of the Great American, well, it’s pretty obvious that this place enabled those sorts of scandalous visitors. These walls are surely holding on to lots of secrets.

The Great American Music Hall’s story began in 1907, when Chris “Blind Boss” Buckley, a crooked political organizer who manipulated the Democratic Party in San Francisco in the 1880s, opened it as Blanco’s Café. Blanco’s catered to the hedonistic whims of the developing metro—prostitution, gambling, and drinking—and the space's ornate balconies and embellished walls ensured its reception as an elegant bordello amidst the urban, post-earthquake roughage. They did, however, hold refined gatherings as well (supposedly).

Some years later, a spunky, bushy-tailed burlesque dancer calling herself Sally Rand (which was not her real name) bought the space and renamed it The Music Box. Though she was a businesswoman, Rand had been arrested several times during performances in San Francisco for lewdness (all of which were always thrown out in court).

She was brilliant, irreverent, and she clearly knew how to throw a good party. Eventually she sold the space, and in 1948, the club reopened as the sadly short-lived Blanco’s Cotton Club, the city’s first (relatively) desegregated venue and house of jazz, attracting acts like SF local and regular player Allen Smith.

The club was renovated and dubbed The Great American Music Hall in 1972, after a short stint as a French restaurant called Charles (you can even still make out the “C” in each corner of the main room’s ceiling to mark that time). Since then, it has housed everyone from Dizzy Gillespie to John Lee Hooker to Count Basie to upcoming acts, like the Black Lips and The Soft White Sixties. They have always catered to an eclectic pick of emerging acts, and the roster of past talent is so incredible, even Jimmy Carter was a fan.

Despite its long existence, the Great American Music Hall retains many of its original detailing: the two ceiling murals have never been retouched, for instance (though they've been cleaned since indoor smoking was banned), and the marquee outside the building has been around since long before the tech boom.

Stepping into the palatial, mildly haunted (allegedly by the Blind Boss himself) Great American is to revere the city’s history and to continue to help preserve local music. Going to a show here is ensuring spaces like these continue to exist, and attending means you can take part in its history too.

Want to visit the Great American Hall? Here are some things to remember, straight from one of the Hall’s longest working employees: If you don’t live in San Francisco, try to drive in (or potentially leave early to catch BART). The closest Parking Garage is at 1000 Van Ness Avenue at O’Farrell. If you are taking public transportation, take BART to the Montgomery station, and catch the 38 or 38L Geary outbound to Geary and Van Ness. You can browse their upcoming shows on their website—most shows cost between $10-35 and finish around midnight. Take a look at the website's information section, and check out their schedule of upcoming shows right here. Don’t forget to keep an eye out for the Blind Boss!