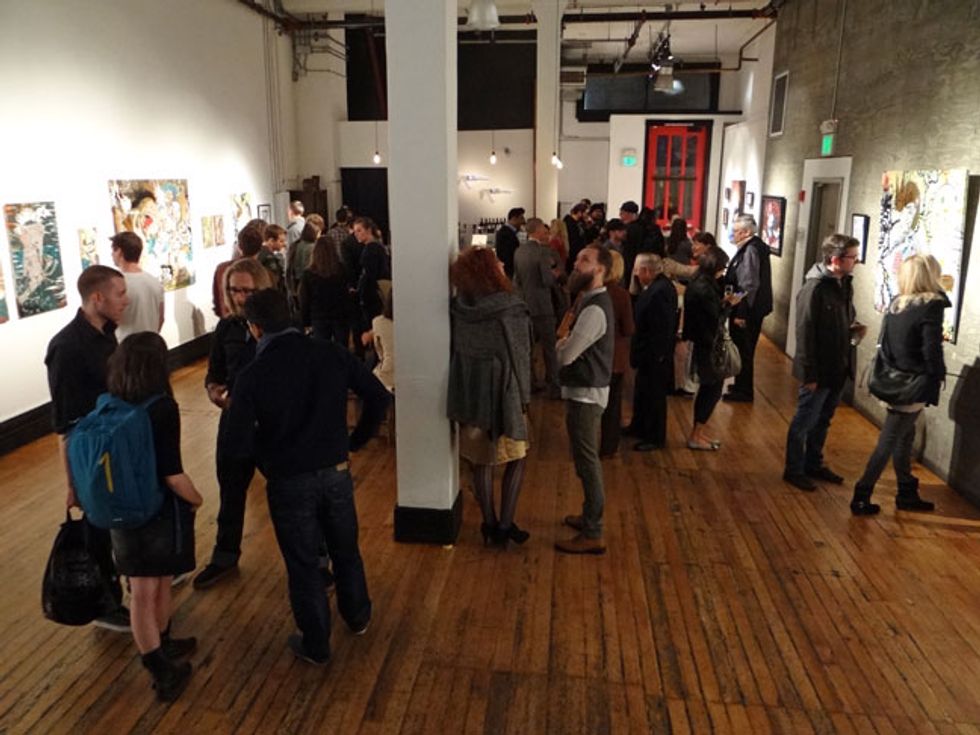 A few years ago I ran into my friend Lindsay at the opening for Merkley???’s last solo show at 111 Minna. I said to her, “I can’t believe it’s taken me this long to see you naked.” To which she replied, “Stuart, have you met my boyfriend?” and introduced me to the guy standing next to her. It’s not as awkward as it sounds though; much of Merkley???’s work is highly stylized, highly photoshopped, highly weird, images of nude San Francisco women. That night, the walls of the 111 Minna Gallery were lined with the nakedness of women I’d known, or at least recognized, for years. Many of these ladies were people I’d actually ran into at 111 Minna in the decade plus that I’d lived here, being that 111 Minna has been an SF cultural landmark and social crossroads since even before the first digital gold rush.

Part art gallery, part event space, part bar, 111 Minna has been a lot of things to a lot of people in the 20 years its been open. I’ve been there for movie screenings, hip-hop shows, art openings, award shows, random free food/booze events, and “Fuck Cancer” fundraisers. The fact that it’s such a varied space has allowed it to be a bridge between high-brow and street level art, making it one of the finest places to network and meet interesting new people in San Francisco. But I haven’t always thought so.

I’m pretty sure I talked shit about 111 Minna in Broke-Ass Stuart’s Guide to Living Cheaply in San Francisco. Looking back I imagine I thought it was pretentious because I couldn’t afford the drinks there. Given its location on the border between SoMa and the Financial District, it makes sense that I couldn’t afford it. That said, its funny how reasonable the drinks now seem compared to how expensive so many of SF’s new bars are. As someone who writes about things and places for a living, it’s nice to be able to go back and recant some of the criticisms I may have had at an early period of my career. I mean, truthfully, 111 Minna is kinda pretentious, but deservedly so. They’ve been making world class art super accessible to San Franciscans for two decades, despite the cultural and economic ups, downs and turnarounds that The City has endured.

Last night I visited The Battery for the first time and I’m sure I’ll end up writing about it sometime soon for this column. But in short, my first impression of the place, other than it being magnificently done, is that, in a way, people are paying a lot of money for access to the kind of networking that SF’s creative community has already been doing at 111 Minna for decades. Technologists, artists, writers, doers, movers, shakers, and makers have always collided at 111 Minna. That’s probably what makes it so special and what’s given it the longevity it enjoys. I know I’ve been first introduced to some of San Francisco’s best and brightest while getting smashed, dancing, and checking out new art in The City’s most famous alleyway gallery/venue/bar. While I’m admittedly fascinated by the idea of being a member of The Battery (which I can’t afford to do), 111 Minna will still continue to be SF’s public social club, no matter how many private ones open up.