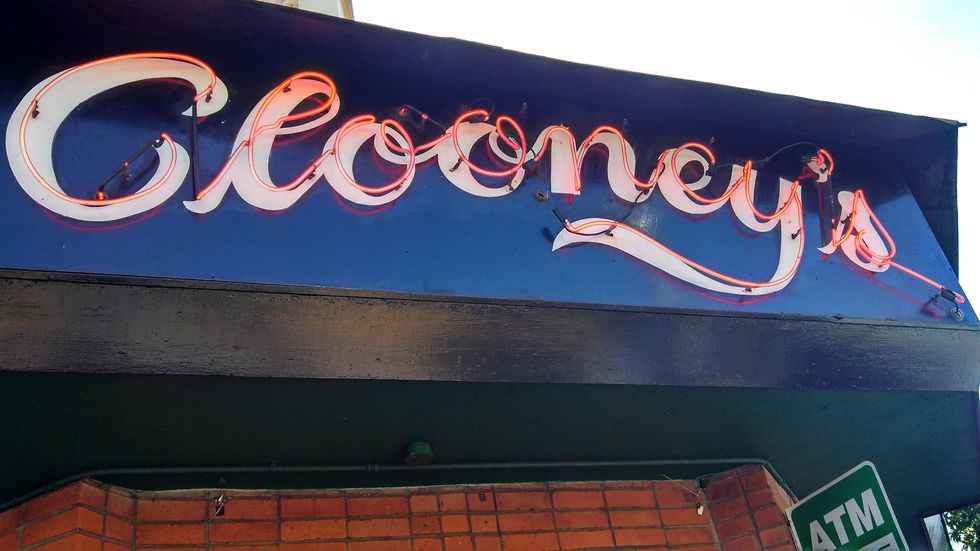 I don’t know what pushed us in the direction of Clooney’s that night. Was it that, as a group, we’d concluded that drinking in the divey-est bar in the vicinity was imperative? Or were we just meandering by and the glow from the neon sign suddenly made us thirsty? Truthfully, it doesn’t really matter because as we walked through the double doors that evening, I realized that whatever it was that brought us there, had done so so we could witness something truly divine.

A group of ten or twelve people were crowded near the entrance dancing fervently to the Lil Jon & the East Side Boyz song “Get Low,” and just when the chorus dropped and the jukebox spurted “To the window/to the wall/to the sweat drip down my balls” I saw the infamous Isaac Fitzgerald in the center of it all, rocking out like he was possessed by the ghost of Lil Jon’s career. Surprisingly nimble as he sweated, danced, and got low (as the song implored), Isaac popped up, paused for one beat and then pointed to me as if it were my turn to battle him. I shook my ass feebly for a moment or two, realizing I was already bested and then gave Isaac the hug he deserved for absolutely making my night.

Other than the impromptu dance party, Clooney’s was much the same as it has been for the past few decades. Giants and Niners ephemera clung to the walls while pool balls clacked and people fed dollar bills to the jukebox. Local drunks and weirdos sat around the horseshoe-shaped bar staring at the TV as muted men in ill-fitting suits, talked about sports on screen. Inside jokes and suppressed snickers were passed around like little bars of snickers on Halloween. These were things that probably could only be understood if you’d been hanging out at Clooney’s for ten plus years, or if you were really really drunk. That is to say, Clooney’s is exactly what a neighborhood bar should be like. It’s certainly not the most welcoming bar in the world, but if you pay your dues eventually you’ll be taken into the fold.

I was there that night with Jeremy and Erin and Marla and her new boyfriend. The five of us squeezed into a corner so we could catch-up with each other instead of being caught up by Isaac and his dancing hooligans. It was good to see Marla; She was one of the ones that moved out of San Francisco before it was hip to do so. She’d followed a boy up to Oregon and when things didn’t work out, stayed and became an Oregonian. It’s like that with old friends who you used to spend a lot of time with. You go a few years without seeing them and then have to spend time getting to know the person they’ve become in your absence. I mean, they’re the same person they’ve always been, but an older version with newer stories. And in a way, seeing who they are now almost acts a mirror through which you can see who you’ve become as well. All I knew is that I was becoming hungry, so we ordered some food from The Galley, the kick-ass pop-up kitchen that Justin Navarro and his crew somehow, incredibly, put Clooney’s on the culinary map. The fact that Clooney’s is a place to drink and brood, or drink and talk, or drink and wile out to Lil Jon is self evident. The fact that it’s now a good place to eat is mind blowing, and actually kinda perfect.

These days Isaac Fitzgerald is doing his dancing in New York City and I’m still trolling through San Francisco bars, telling stories about them with a sentimentality that only someone who drinks too much and writes too much can do. As for Marla, she happens to be in town today. Maybe we’ll stop by Clooney’s and see who that place has become since last time we were there.