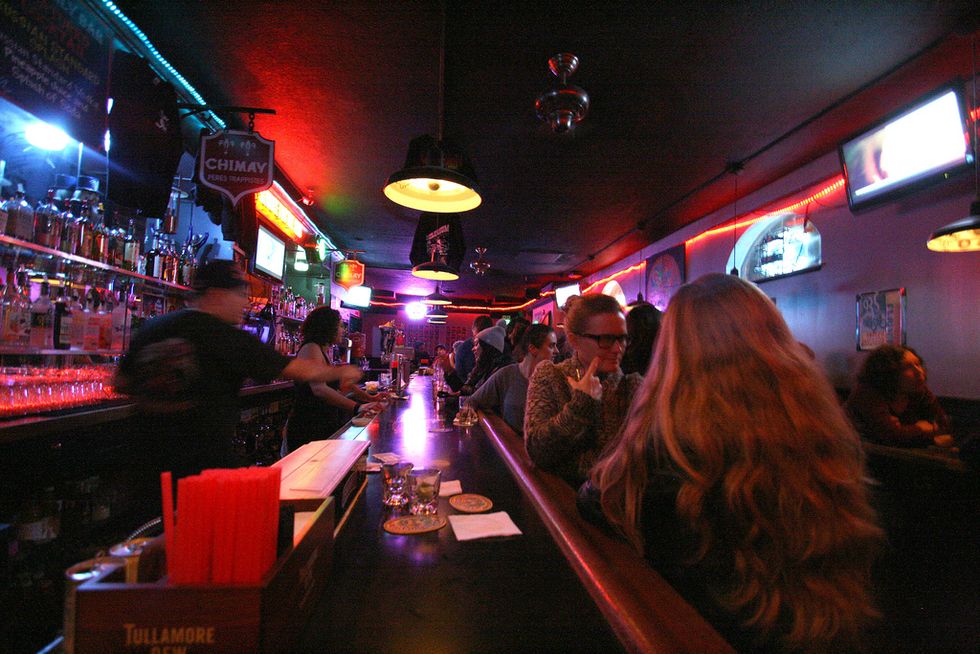 I’m too old to go to Delirium now. The tightly packed bar area and the sweaty, sticky, smelly dance floor are too much for me, even if the drinks are incredibly cheap. But spending too much time and making poor decisions at Delirium is a right of passage for anyone who’s nighttime lives are passed in the Mission. Many nights in my early and mid 20s were whiled away under the beer signs and the skate videos and the neon light that says “Service for Sick.” We all went because the boys and girls were drunk and good looking and had tattoos and were easy. Yes, we went to get laid and to buy drugs and to do drugs and to dance on drugs. But mostly to get laid.

The Marina has it’s legendary triangle of pick up joints where the sex comes easy and the conversation comes hard. In the Mission we have Delirium. Lust comes in the flavors of PBR and Jameson and smells like cigarette smoke, sweat, and cocaine. Tattoos and piercings are the plumage of attraction as skaters, punks, hipsters, and other Mission denizens make eyes at each other across the pool table and the bar. “This is what it feels like to be young, and hip, and fucking alive in one of the greatest cities in the world!” you tell yourself, slugging back another cheap shot, building up the confidence to talk to that hot piece of ass you’ve got your sights set on, not realizing that this is just one phase of what it means to be an adult. Also not realizing that Delirium is the perfect name for this bar, not because you may have mean case of Delirium Tremens the next day, but because, like the feeling of delirium, your desire to spend time here eventually goes away.

Delirium is the breeding ground for all kinds of adventure and shenanigans. The people you meet here will turn you on to so many things you didn’t know were happening in the city. 2 a.m. comes and suddenly you’re invited back to someone’s warehouse to learn the drums, or to an apartment that has been converted into an after hours bar, or to a rooftop to light off tons illegal fireworks while you passionately make out with someone who, a few months from now, will probably be dating one of your friends. Delirium is where you realize how small and interconnected San Francisco is because it’s one of the few places in the world where, no matter when you go, you’re guaranteed to see someone you know. In a way, Delirium is like training wheels for a life spent in this glorious city; you have to be at peace with all the mistakes you make and bridges you burn because chances are, you’ll come face to face with some of them sitting on those barstool very soon.

But yes, eventually you grow out of Delirium because, honestly and truly, you don’t want to be 24 forever, even if it feels like you do at the time. Suddenly your friends can’t stay out till 3 a.m. every night and the frequency of random adventures originating at Delirium diminishes, threatening to be replaced by too many nights spent doing too much blow after the bar lets out. And then one day you’ll wake up (probably next to a stranger) after a long hard night and realize its time to move on, that your time at Delirium is done. And you’ll thank it for all the strange, bizarre, and beautiful things it brought into your life.