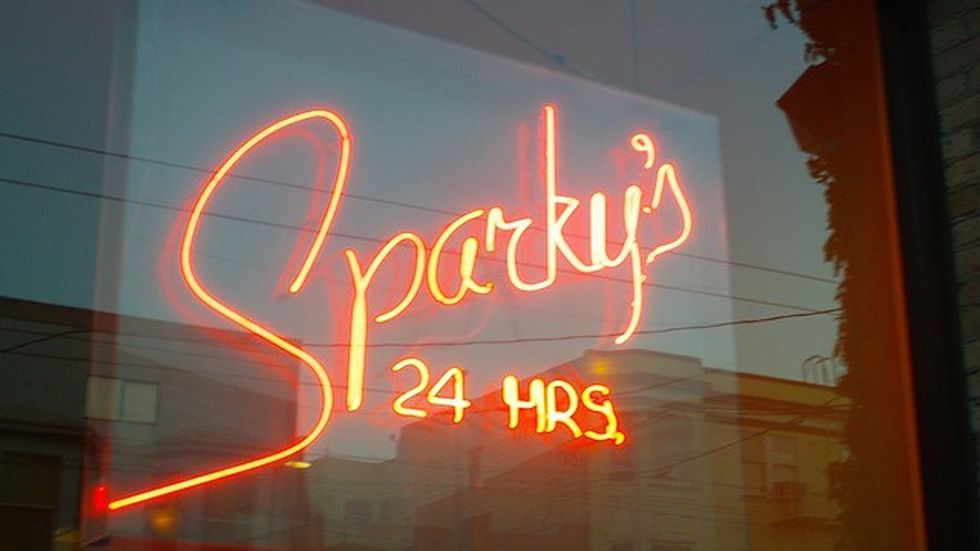 Part of being a Weeknighter is giving yourself to the weeknight. You either have to commit to it and ride the bastard for whatever it’s worth, saying yes to the often strange opportunities that present themselves, or have two drinks and go home to watch Netflix. There’s really not a lot of wiggle room in between. That’s because the best things happen on off nights, nights when the “work hard, play hard’s” of the world are doing neither, and The City is wide open to those of us who like to feel its electric murmur without the dissonance of the weekend. That’s when San Francisco feels most like it’s ours.

Seeing that Sparky’s Diner is a 24 hour joint near one of the busiest intersections in The City, it’s been an integral part of the electric murmur for as long as it’s been around. The tragedies, triumphs, shakeups, breakups, and breakdowns that characterize a real city happen at Sparky’s on a nightly basis. This meeting place, bathed in neon lights and campy décor, has been both the genesis and finish line for millions of relationships, one-night stands, friendships, adventures, and hardcore cases of the munchies. And that’s just on the weekends. If you’ve never had a weird night or morning at Sparky’s, you’ve never really gone out in San Francisco. You’re still playing in the minor leagues.

Years ago we were at Sparky’s after the bars had closed. Arik was up from LA, Paul was in from New York and Anthony and I were sharing a tiny room over on Broadway. It was a weeknight and we’d said yes to whatever we could, walking the streets and drinking on them, searching possibly for love or lust, but more than anything, for adventure. Sparky’s was ablaze that night in the way that only Sparky’s could be. A gaggle of drag queens in full regalia held court in the corner, loudly berating each other over things that had me wondering who was gonna fight and who was gonna fuck. A teenage runaway sat in a booth all alone with a cup of coffee, nodding off from whatever junk he’d scored in the TL that night. A gay couple held hands, sharing a milkshake, while a straight one stood outside yelling at each other and crying in that way that saddens you. Heartbreak hurts, even when its not your own.

We added our own drunken stupidity to the madness. Earlier that night Arik had told us that he was dating a Suicide Girl. At the time this was a big deal, it was like our version of dating a Playboy bunny. When our waitress arrived at the table with green hair, a few facial piercings, and a lot of visible tattoos, Paul did a very “drunk Paul” thing and mumbled “You’ll never be a suicide girl.” To which our waitress responded “what the fuck did you just say?” and Anthony, who doesn’t drink, had to intervene by explaining that his friend was a drunk idiot who’d had a bad day. While I’m sure we were not the biggest assholes she saw that night, I still didn’t show my face around there for a little while after.

Just last week I had a late night at Sparky’s. A___ and I were having one of those talks that seem to go best while sharing sweet potato fries and a beer in a San Francisco diner at 1am. You know, the ones where you’re trying to figure out where and who you are in relation to one another. The kind where you both say things like “I want more than anything just for you to be happy” and both of you mean, it’s actually you that makes me happy. And for once we were the most insane people in there; two people who are crazy for each other, but also too crazy to fully give ourselves to each other.

That’s just how it goes at Sparky’s. Love, loss, madness, heartbreak, and healing are exchanges that happen over milkshakes and pancakes. And the negotiation of all of them can happen over sweet potato fries and a beer. Sparky’s is never boring and it’s purely San Francisco. Just don’t tell the waitress she’ll never be a suicide girl.