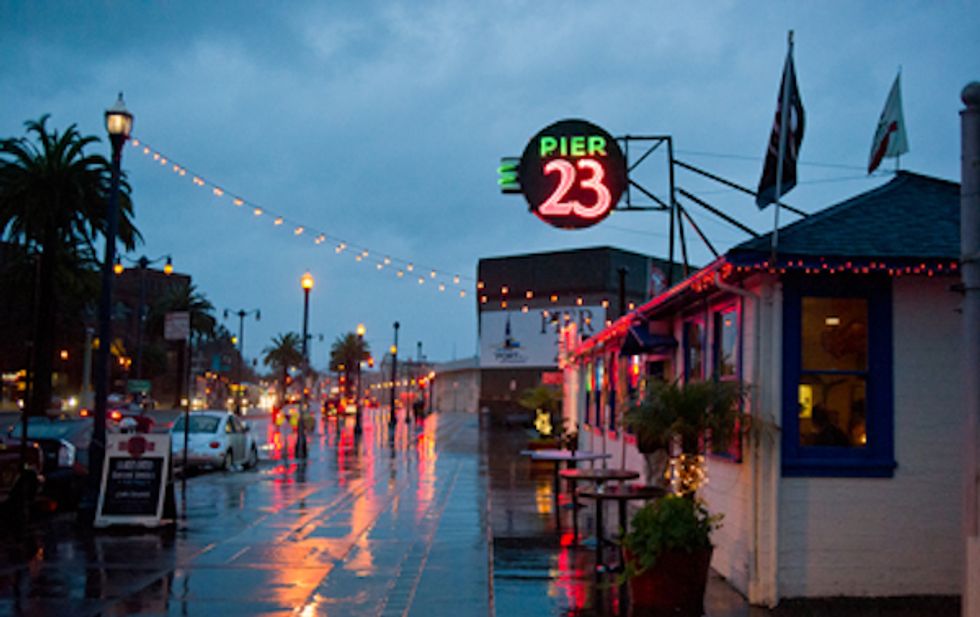 The Weeknighter: Strong Margaritas and Drunk Dancing at Pier 23 Cafe

Things can get weird at Pier 23. It sometimes seems like all the forces in the universe collide there causing a perfect storm of what San Francisco should be like to those outside looking in. It’s a seafood joint, on the Embarcadero, with live music, a full bar, plenty of tourists, and good amount of locals. Red faced yahoos drunk on margaritas and tourism dance in ways they maybe wouldn’t at home, while dining families look on. People let it all hang out because this is San Francisco they tell themselves, this is what you do. And they’re right, this is what you do in San Francisco and nobody busts anyone’s balls too hard because we’ve all had a few too many margaritas as well.

Every time I go to Pier 23 I forget that I know half the staff from various eras of my decade plus in San Francisco. It’s always a pleasant surprise and one that reminds me that, when you’ve lived here long enough, no place is safe from running into your friends...for better or for worse. I guess that just depends on the margaritas though. Those fuckers can be deadly.

I wish I was a tourist and could stumble upon Pier 23 with fresh eyes. It’s the kind of place that’s far enough away from the freak show of Fisherman’s Wharf that those who find it accidently think they’ve found a San Francisco secret. And maybe they have. When they get back to wherever the hell they’re from and they tell their friends about the night they wandered off just to see what they’d find, they’ll say they found the real San Francisco. They’ll marvel at the diversity of the crowd and how everyone seemed to get along. It’s not like this back where I’m from, they'll confess to someone sitting next to them at the bar. This person will probably look different from them or be of a different sexual orientation. This might be the interaction that sends our hero home with the realization that, people are people, no matter what their skin tone is or what gender gets their sexy parts all tingly. Fuck man, what’s in these margaritas? Is the last thought before the awkward dancing begins.

God bless that awkward drunk dancing. At the end of the day, it’s what really makes us human. You think this as you watch all that’s going on inside through the window behind the bar. You’re on the back patio, by the railing, finishing a drink, smelling the salt water, and wondering if it’s ok to smoke. It’s not, but you do it anyways, until someone asks you to put it out. The food smells good, real good but you’re lost in contemplation wondering what the waterfront was really like back in the days when it was teeming with stevedores and workmen.

And that’s Pier 23. A great place to be on a sunny day and an even better place to be on a weird weeknight. Go for the margaritas, and stay for the company. Who knows maybe it will be you that walks away from the experience with your mind blown thinking, I didn’t know people who didn’t live in San Francisco could be so cool. People are people, especially when they awkwardly dance.