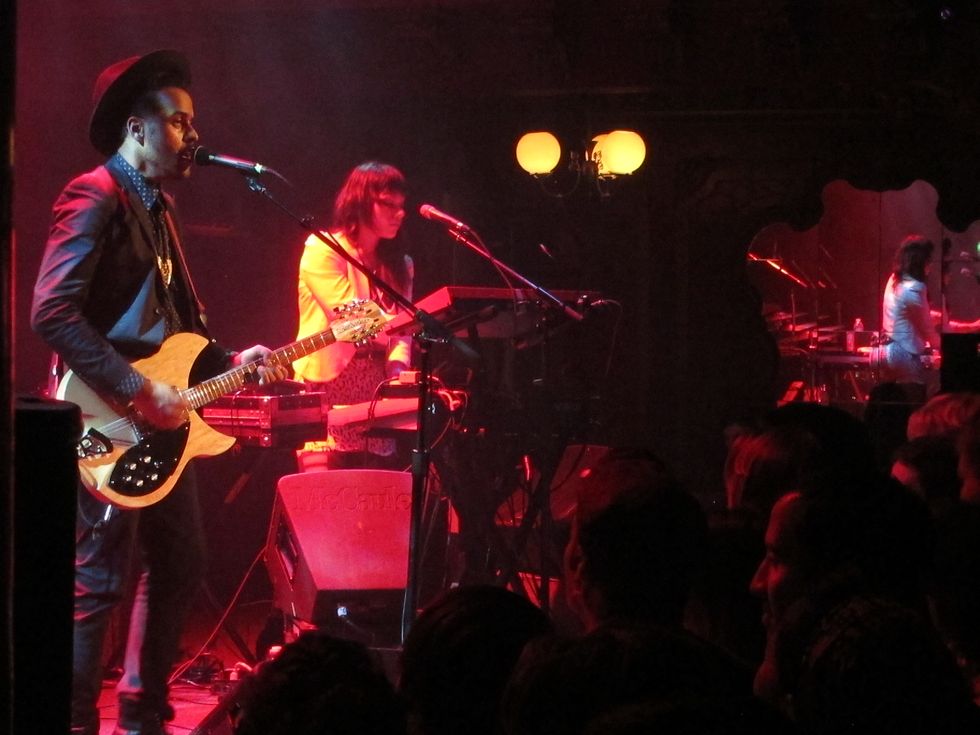 What could be dubbed the Really, Really, Ridiculously Good-Looking Tour rolled through town last night at the Great American Music Hall, courtesy of era-chameleons Twin Shadow and the truly independent artist known as Diamond Rings. Both acts have been touring in support of stellar debut albums for about a year now and recently joined forces, a coup for indie glam rock fans. The results make it look like some sort of if-looks-could-kill rock  equation.

Diamond Rings’ John O'Regan could be a coverboy for a Euro fashion mag, ready for the lenses with eye shadow, a lean, boyish figure, and a sassy plume of blonde hair. And the songs complement the spectacle: the Byrne/Bowie voice, the clean production value, and the interpretive dance are a delicious admixture.

The Toronto-based artist's background is a study in contradictions, and so was his stage persona on Sunday. He grew up reconciling athletic instincts with his artistic passions, playing hoops by day and making music and art by night. So when he flung his body around like a modern dancer onstage at GAMH last night while sporting a Raiders jacket and matching black and silver, three-dimensional, crystal-studded hat, singing an octave or three lower than his actual voice, there was a strange but alluring mental disconnect between the androgynous appearance and his deep, testosterone-y voice.

A full band could easily perform the instrumental tracks he sings over, but that also might distract from the wonder that is O'Regan. He alternated between fuzzy guitar and jangly keyboards, with percussion, bass and pre-programmed atmospherics. So yeah, it’s quasi-karaoke. But damnit if he didn’t give it his all, playing his heart out of a selection of moody pop tunes from his album Special Affections, along with a few unreleased tracks.

Brooklyn’s fit-for-the-runway four-piece Twin Shadow is lead singer/guitarist George Lewis Jr.’s prerogative. It’s hard to say what metrics he used to recruit his band — some sort of algorithm involving style sense, musicianship and societal disenchantment, no doubt. Whatever it is, they’re all on the same page, just as happy to pry out a melodramatic ‘80s-ish noir pop tune as they are a post-disco dance number.

Lewis Jr., recent darling of GQ magazine, came out looking ready for a 1940s horse race, outfitted with an old-timey Stetson hat and suit to match, and some bling around his neck to not match. They began with a hint of foreshadowing, playing a vaguely recognizable, slo-mo version of “Castles in the Snow,” but just a verse.

They re-mixed a few other songs from their lone album Forget, including “Tyrant Destroyed,” re-imagined with some eerie synth texture courtesy of keyboardist Wynne Bennett, and the haunting “Tether Beat,” slowed to a ghostly pace with minimal accoutrements.

They played virtually everything from Forget and a few new tunes waiting for release that sounded equally ambitious, a bit prog-rocky even. We’ll be waiting impatiently.