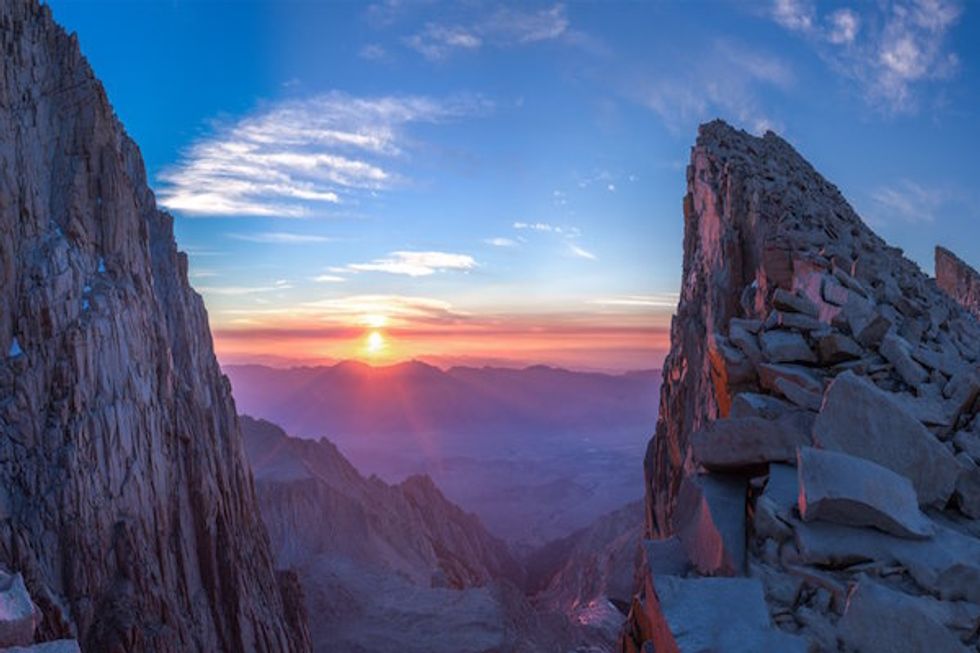 The John Muir Hiking Trail (a.k.a. the motherland of breathtaking views) is named after the nation's most influential naturalists and founder of the Sierra Club, John Muir. Running 211 miles north and south, the trail spans over three national parks, beginning at the glaciated granite domes of Yosemite to the 14,505-foot summit of Mount Whitney (the highest point in the continental United States).

Finishing the trail will take you 30 days, so pack your bags and prepare for a long adventure—you're about to witness some of the greatest assets that nature has to offer.

Cathedral Peak—part of the Cathedral Range in Yosemite National Park—was formed by glacial activity and got its named from its cathedral-shaped peak (duh).

Tuolumne Meadows is a quiet, dome-studded, meadowy section of the Tuolumne River, on the east side of Yosemite National Park. Perfect for quiet meditation.

The Lake Evolution basin in High Sierra country is most famous for its pyramid-shaped peaks, mountain meadows, alpine lakes, and clean alpine air. At night, you can look up and see the stars and galaxies, unpolluted by city lights.

Garnet Lake is located in the Ansel Adams Wilderness of Inyo National Forest. Framed by bedrock and pines, it's easy to see why the famous photographer loved this place. (Grouse Meadows, photo by Rini Sugianto)

Grouse Meadows is located just south of the Bishop Pass and John Muir Trail junction. Keep an eye out for deer in this beautiful meadow.

Mount Whitney is the highest summit in the Sierra Nevadas with an elevation of 14,505 feet.

Muir Pass is the midway point of the John Muir Trail. The Muir Hut, built by the Sierra Club, is at the summit of the pass.

Rae Lakes Basin stuns as one of the most beautiful locations in Kings Canyon National Park.

Seven Gables is located in the Bear Lakes basin near Lake Italy and Mount Hilgard. It sits above most of the surrounding peaks and has outstanding views ranging from Mount Lyell to Mount Whitney.

Thousand Island Lake is a large, elevated lake in the Sierra Nevadas named for the various small rocky islands that pierce its surface.

Popularized by the Reese Witherspoon movie Wild, The Pacific Crest Trail is one of the most stunning hiking trails in the world.

A Revitalized Santa Barbara Gets Down, Gets Funky