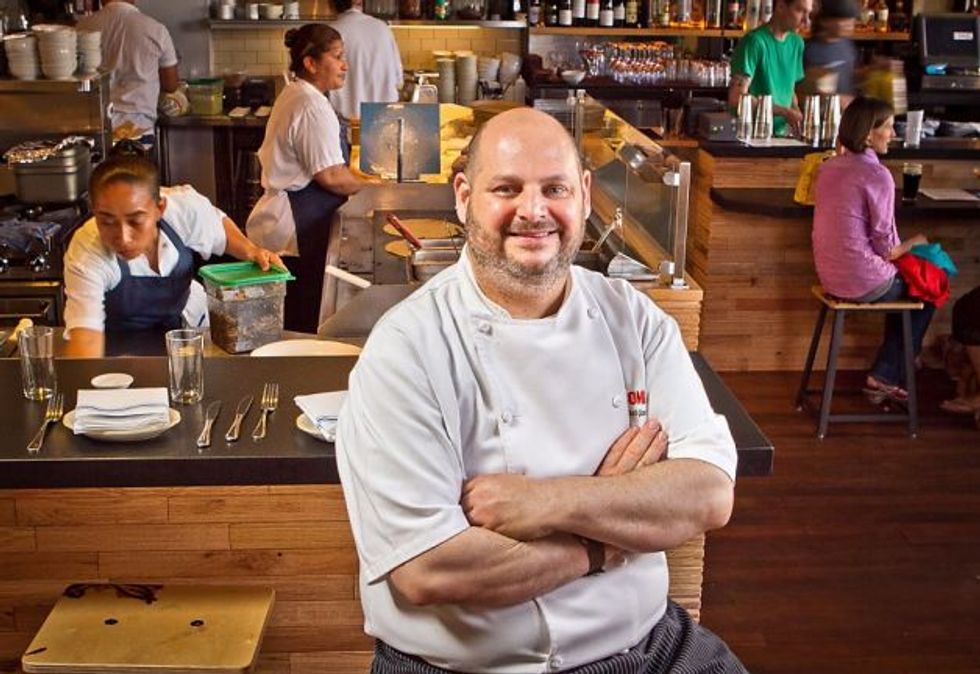 Recently named by Conde Nast Traveler as one of the best new restaurants in the world, Berkeley’s Comal brings the heat. And Chef Matt Gandin brings his trademark respect for tradition, technique, and, perhaps above all, approachability. Those who dwell in the 7x7 (Gandin remains one himself) might be most familiar with his work at Delfina, where he helmed the kitchen for nearly nine years, but Gandin’s thrilled that some have followed him over the bridge—“the invisible wall,” he calls it—to see what he can do when taking his inspiration from south of the border.

A single meal I had, in Bologna, Italy. I was just out of college, doing a whirlwind backpack trip, staying at this little hostel. The only place to walk to was called Trattoria San Sisto... I only had one dish, being a student on a budget: gnocchi with a simple gorgonzola sauce, and it was perhaps one of the most memorable things I’ve put in my mouth. That single bite kind of put me on a certain trajectory, and when I decided to live and work in Italy for a while to further my culinary education, I chose that region, very much based on that experience. Even several years later, at the same place, ordering that same dish, it was just as remarkable and memorable as the first time.

That’s good gnocchi! You have a guest at home you want to impress. What’s the go-to meal?

I don’t know if I can call it a go-to because it’s a seasonal thing, but I do a little mushroom hunting in the winter; I have a patch in Marin—every year, two weeks after the first heavy rains, porcini pop up. So probably mushroom risotto with porcinis I handpicked that day.

That sounds amazing. If somebody could only eat at Comal once, what should they order?

The menu changes daily so it’s a little tricky, but... perhaps the quesadillas with rabbit tinga, mole amarillo and pea shoots, or in general any of the moles. They’re all very distinctive.

What’s the best dining experience to be had in the Bay Area, other than here?

There’s so much diversity and brains as far as tasting menus and all that, to more casual stuff. I had an incredible experience at the French Laundry—as just about everybody does. I was fortunate enough to have had the reservation made by a friend who was a former employee, so we were completely taken care of… it must have been a five and a half hour experience, even five or six dessert courses. But I can get down and dirty in the city, too! Nojo I like a lot for a nice, less expensive meal; the izakaya there is fantastic.

Most outrageous thing that’s ever gone down here?

There’s something about our back patio that leads people to think they’re at their own backyard barbecue—that and a bunch of agave-based spirits—but we’ve definitely had some guests that have been walked in on having sex in the bathroom, and I’m not talking about hot sexy young people, but like, older, thrashing about…

Isn’t that just always the way? Moving on: You kill your sommelier and you’re on death row. Final meal?

It’s completely simple, but my perfect food on the planet is the perfect bean and cheese burrito, made with amazing refried beans. The tortilla nicely toasted on a grill. Simple and perfect.

Best answer ever. One ingredient you could not live without?

I could not live without cheese. I love cheese of all kinds. I will eat any and all cheese that is in front of me, but... the stinkier, the better.

San Francisco is a great food city; obviously New York. Whenever I go to New York I feel like it’s Romper Room for adults. You bounce around in cabs from place to place, eating and drinking amazing things, so I’d say New York—just based on sheer volume of great places and diversity.

Fill in the blank: People might be surprised to see me eating ___.

Chapulines. Grasshoppers. Very specific to Oaxaca; at the markets, you’ll see mountains of them; people eat them like popcorn. I actually put them on the menu once or twice here and was surprised how many we sold… I think they’re delicious. They’re usually toasted and tossed with chili and lime or Gusano salt, which is the agave worm salt; they’re a little sour but they’re crunchy; a little creamy on the inside, almost like a seafoody background flavor... Hopefully I’ll have them on the menu here more often.

And finally: bacon. Awesome, or overrated?

Both. It’s awesome as a building block for developing flavors; it’s overrated when it’s used ubiquitously as an afterthought, to mask lack of depth. I feel the same way about it that I do about dumping fish sauce on everything – adding something that’s porky and salty or fishy and salty to try and add some kind of artificial complexity – that’s overrated, but as a building block to develop flavor, then bacon is awesome.