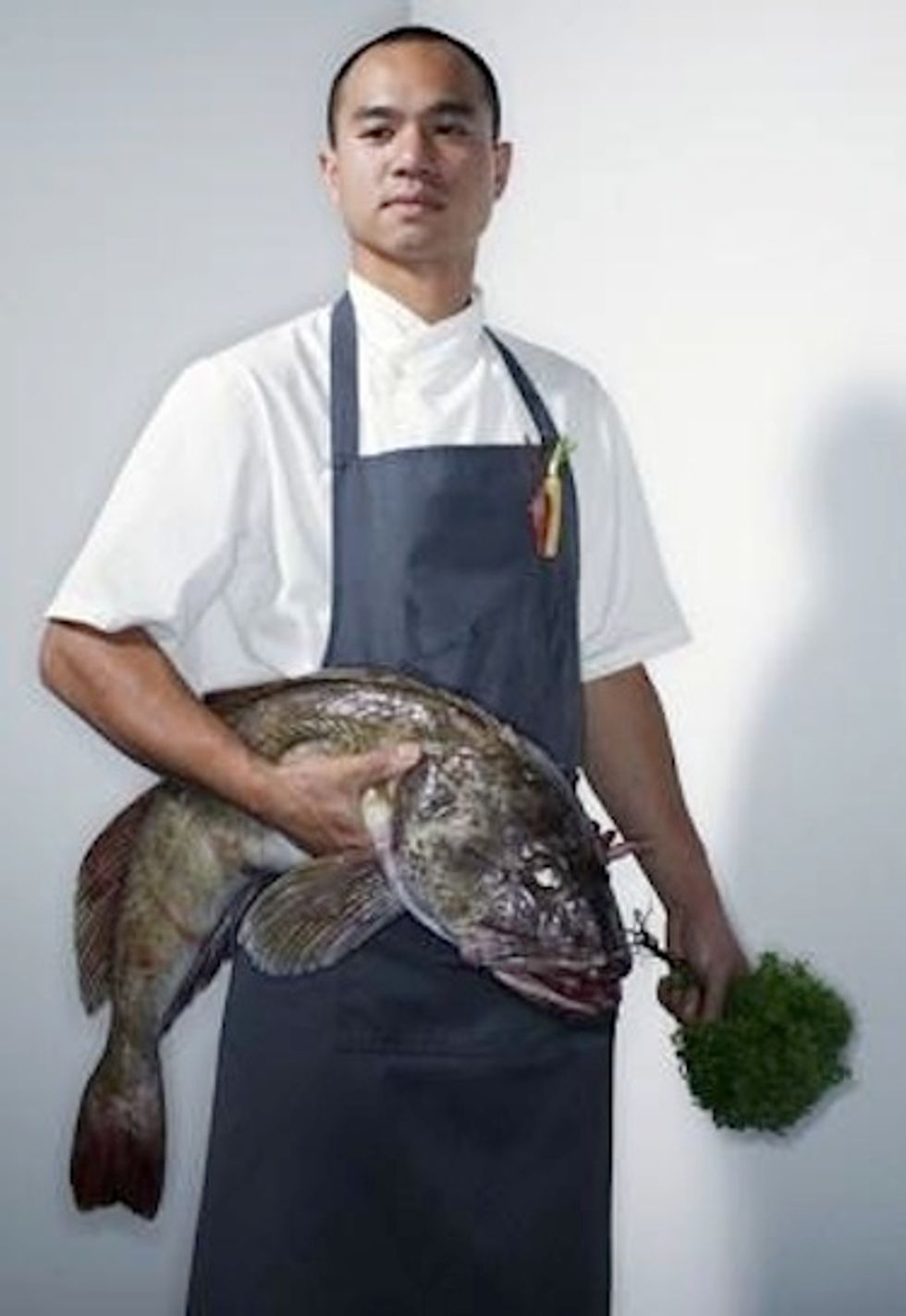 How well can you get to know a chef in fifteen minutes?

I meet chef James Syhabout at Commis, his sophisticated, palate-boggling bistro that hides in plain sight on Oakland’s Piedmont Avenue—and earned local-legend status in 2010 when it scored a Michelin star just four months after it opened. Syhabout complements Commis’ tasting-menu concept with the equally appreciated, more casual, and arguably more personal (Syhabout’s mother, who once owned a restaurant in the very same location, “consulted” a bit on the menu) Hawker Fare. And soon, he’ll make it a trifecta: Syhabout—along with chef/collaborator Benjamin Coe, and anyone who heard about, let alone tasted, the fried chicken with oyster mayo served at the recent preview pop-up dinners—is eagerly anticipating the opening of his newest venture, the Southern-inspired Box and Bells. (His latest estimate is July; “It depends on permitting; we’ll see how the city cooperates,” he says with a shrug).

Yet, despite his busy schedule, Oakland’s only Michelin-starred chef was down to give me fifteen minutes on a bustling Friday afternoon. His mellow demeanor and quiet tone (tough to hear above the constant whir of blenders and clang of pans) belied the fact that his fresh perspective has proved key in putting the much-maligned city solidly onto the country’s culinary map. Here, we talk bacon-eating vegetarians, the ever-evolving thing that is “California cuisine,” and double-dipping. (He’s for it.)

Probably instant noodle packets. There was a brand called Mama, and it was like my first real cooking, just playing with the flavors, modifying it and making it my own… I’d season it with soy sauce, use some vegetables, herbs, that kind of stuff. I think that was my first really, like, intellectual [laughs] experience with cooking.

You have a guest at home you want to impress; what’s the go-to meal?

If I was cooking at home, probably cooking outdoors—simple, grilling some meat, vegetables, maybe, just because I’m indoors all the time and it’s nice to be cooking outdoors and be in touch with nature a little bit. It’s different.

Well, here they really don’t have a choice—

People always enjoy our egg dishes. I think there’s something comforting about eggs in general, vegetarians or not, people have some relationship to, a fondness for eggs cooked in a certain way. But we always try and change it up, do it differently. With eggs, the sky’s the limit though, you know; they’re very versatile.

Yeah, that’s interesting. So what about at Hawker Fare?

At Hawker Fare, what would I eat… we’ll have a new, extended menu in June, so I’d definitely have the sticky rice. I like eating with my hands, just kinda going back to my roots where we all used to sit on the floor, and everything’s family style, everyone’s double-dipping in soups, and it’s fine, it’s all family, so I think that would really bring me back, like a ball of rice in my hand, dipping it into the different chili sauces, grilled meats, jerky, I think that’s what I’d recommend.

What do you think is the best dining experience in the Bay Area, other than here?

That’s a hard one; it depends on my mood. I could be in shorts and flip-flops at a taco truck in East Oakland standing up and eating on a street corner, and that could be my most real-life dining experience, something that resonates with me having grown up in this area. Otherwise, I think I’d say Meadowood… I like Meadowood because it gets you out of the city, up in Napa, in nature; it’s just a great overall package. We ate there, stayed overnight, so it was the whole experience. The whole thing’s awesome.

What’s the most outrageous thing that’s ever gone down in one of your restaurants?

We had real heavy rain, I think in January or so, we had a sewer collapse in the street, so we were forced closure for like ten days. It was a good thing but also a bad thing, of course, we lost the business and that’s never good, but at least it’s fixed; now we don’t have to worry about it, and it gave us a nice nine-day break! So it was sort of bittersweet.

I can see that. Okay, you killed your sommelier and are on death row. Last meal?

I want to say sushi. Something very clean, I don’t think you could ever get sick of it.

And if you did, it wouldn’t really matter in that situation… anyway. Moving on: What’s the one ingredient you can’t live without?

Salt. Does that count? I can’t live without salt. I’m a big salt fanatic, different kinds of salts, you know, like making herb salts, stuff like that. Salt’s just a key point to cooking.

I haven’t been to a lot of food cities, I’m embarrassed to say, so I don’t know, it’s a toss-up. There are so many great cities in the United States, but I haven’t been to New Orleans, haven’t been to Chicago, haven’t been to Tokyo, so I think my opinion is kind of biased you know, limited, but of the ones I’ve been to I think we’re very fortunate in the Bay Area, we have so many different things, you can get anything, everyone’s got their own take on what’s so-called California cuisine, and I think that’s a beautiful thing. It’s not predictable.

Ha! And that brings me to my final question. Bacon: Awesome or overrated?

It’s awesome. We always joke around; we call it the gateway meat. You know there are those vegetarians who are like, I’ll have a BLT. I think it’s awesome.

Know someone who's ready for their fifteen minutes? Tweet Shannon at @Shannon_BKelley