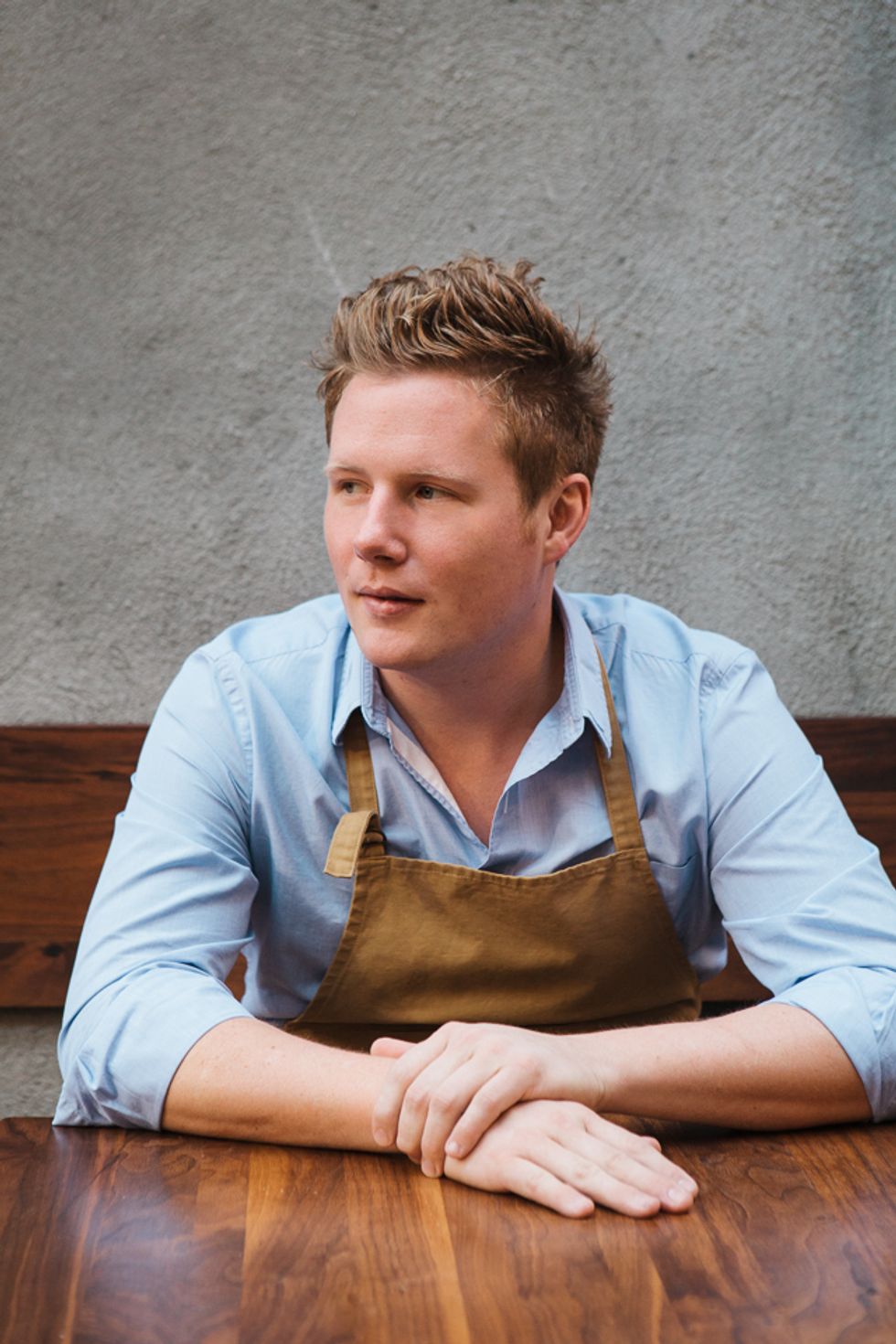 How well can you get to know a chef in just fifteen minutes?

Chef Thomas McNaughton breezes into Flour + Water, his flagship restaurant, around noon on a recent Friday, and greets me by apologizing for how he smells and excuses himself to wash his hands. He’d snuck away to spend a couple minutes with his chickens, during a break in the marathon of meetings he endures every Friday, “the not-fun stuff that goes on in restaurants,” he says. McNaughton comes off as surprisingly low-key for someone who oversees three restaurants in the Mission’s 20th Street corridor, a mini empire that’s turned this sleepy slice of town into a culinary destination.

Of course, this is made easier thanks to the fact that he lives upstairs from Flour + Water, and that his two newer ventures, the deli-inspired Salumeria and the more upscale Central Kitchen, are close enough for him to raid their refrigerators (more on that later). Here we talk cocaine, vinegar, and bad pizza.

Geez, that’s a good one. I should have read your questions before!

That would be cheating.

Ha. Maybe being on a farm in south Jersey, a blueberry farm. I remember eating the blueberries and being like, damn, this is really, really good fruit. And then wanting to work with food from there. I was 15 or 16.

You have a guest at home you want to impress; what’s the go-to meal?

Convenient. If somebody could only eat at each of the restaurants once, what should they order?

At all of the restaurants, we don’t really have a signature… Even when we come up with a dish we really like, say that dish stays on the menu for a week or two, it changes the entire time; we’re constantly tweaking it. But if you’re eating at Flour + Water, certainly any of the stuffed pastas. At Central Kitchen, anything from the wood hearth. At Salumeria, anything on the pretzel roll. Is that doable?

As long as the pretzel roll’s around. What do you think is the best dining experience in the Bay Area, other than here?

Hmm… Can we come back to that? I have to think about it.

Sure. What’s the most outrageous thing that’s ever gone down here?

You kill your sommelier and are on death row. What’s your final meal?

Just an amazing bottle of wine, that comes first, and something cooked on an oak fire.

One ingredient you can’t live without?

San Francisco! I moved out here in 2002, I was only gonna live [here] for a year, and I just haven’t left. And I couldn’t imagine having restaurants in any other city. I think it’s really diverse.

I grew up on the East Coast, so shitty, by-the-slice New York City-style pizza. Like I grew up with.

Have you found anywhere here to get something close?

Um, well I don’t want to say anything cuz it is shitty pizza, you know what I mean?

Ha! Right. So, here's a tough one: bacon. Awesome, or overrated?

We only buy whole animals, and across the board on all the restaurants we could go through four whole pigs a week, which is a lot. We utilize the entire animal. I think bacon’s certainly overrated and overused, but there are certainly a lot of old-world techniques that are still pretty viable and important. We’re using a ton of pork belly, but I do think it’s kind of overutilized. Like, pork belly’s not gonna make every dish better, you know?

Right. So, back to the best dining experience, or let’s call it your favorite; whatever’s easier.

My favorite… Part of the reason I love living in the Bay Area is you can drive half an hour outside of the city and be in the most amazing country… So I think a group of friends, doing an awesome picnic, outside the Bay Area, like amazing, amazing country. And it’s like, you could be in the middle of a field, or you could be on a beach, there are so many different areas that are really, really cool and its only like a half hour, 45-minute drive in any direction. That works, huh? This is it?

Next time you come in say hi. Next time I’ll take a shower, I promise.