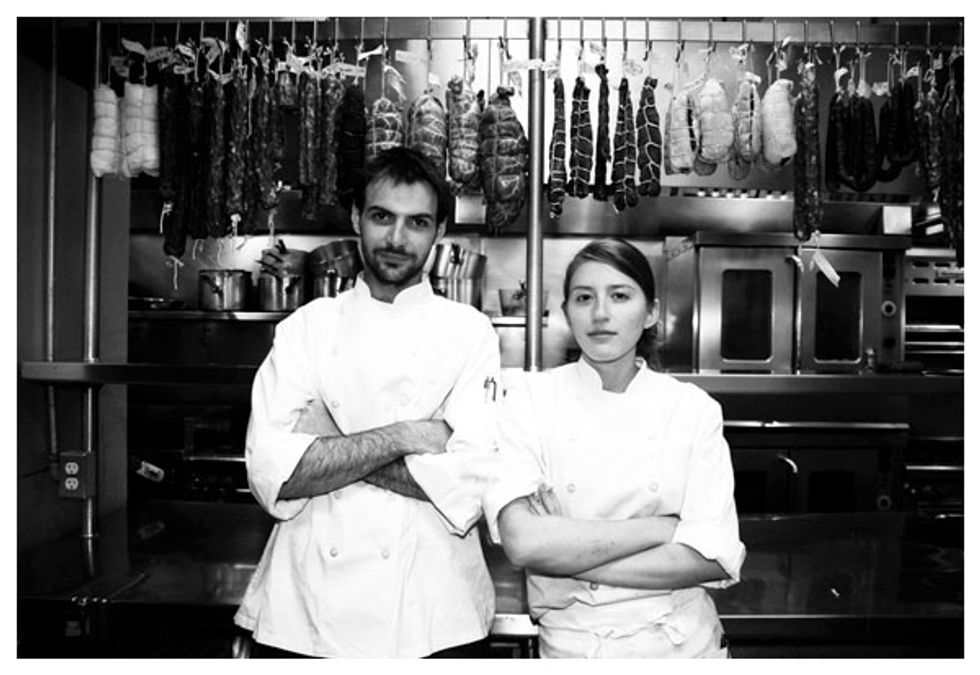 A newcomer to Oakland’s Piedmont Avenue, Homestead – brainchild of husband-and-wife chefs/owners Fred (Farallon, Camino) and Elizabeth Sassen (Farallon, Waterbar) – is quickly making a name for itself with its well-executed, seasonal comfort food. And while a glance at the ever-changing menu reveals clear evidence of the couple’s fine-dining pedigree, they’re even more passionate about creating a warm, welcoming atmosphere. Here, Fred and I talk busted pipes, shells ‘n’ cheese, and the baked ricotta that has everyone talking.

Oh god, that’s a hard question. I guess the social gathering on Sunday afternoons with the family; a sit-down, family, communal dinner. Where it’s less about the quality of the food—not that I mean to say it like that – but less about the food and more about the experience of dining with others, sharing time with friends and family, that environment. And that’s the cornerstone of what we’re trying to create with the restaurant.

You have a guest at home you want to impress. What’s the go-to meal?

When we cook at home we tend to cook very comforting foods, so if I were to pick a meal, let’s say a curry-rubbed lamb leg with spicy lentils and flatbread.

I’m coming over. If somebody could only eat here once, what should they order?

We change the menu on a regular basis; we always use food that’s at the height of the season, so there’s never one thing that’s always the same—we tailor each dish to the protein and vegetables of the season. And it depends upon the guests—if they like spicy dishes, if they like meats or fish. So I would highly recommend that they order multiple things and share so they can all try everything—that communal environment I mentioned earlier—and share the experience of breaking bread and drinking with their friends.

Is there something on the menu right now that you’re really proud of?

The baked ricotta – we make the cheese in house from scratch, press it for two weeks and salt it, then we bake it off every day and serve it with some of our homemade pita, and house-made proscuitto, with seasonal fruit and a little green salad made with our homemade vinegar. The vinegar’s aged for four years.

Nice. What’s the best—or your favorite—dining experience in the Bay Area, other than here?

My wife and I are huge fans of Cotogna, because you can have really good food at a reasonable price… and we know that we can go in and there’s no pretension. It’s not a formal environment; you can sit down in almost a café-type setting, and have top-quality food.

Well, the second night we were open we had two different pipes burst in the ceiling. We were pretty new – it’s the second night of service and we were still trying to figure out how we were cooking and how to do service and I got pulled off the line and the dishwasher broke and the air conditioner unit was leaking and we had a flood in the bathroom and water was spraying everywhere and every time I turned around somebody came up to me and said there was a flood in the other room and I was having to put my plumbing skills to the test and get water turned off while I had 100 people in the dining room.

It was the one and only time it’s been that chaotic and I keep my fingers crossed that it doesn’t happen much more. But we have only been open for two months, you know. I’m sure there’s more of those nights to come.

Let’s hope not. You kill your sommelier and you’re on death row. What is your final meal?

Good question; there’s so many I can’t live without. Probably chiles.

In all honesty, I’ve traveled quite a bit and it sounds very odd, but Beijing just absolutely blew me away. Out of Italy, Spain, Paris, Morocco, Thailand, Vietnam, Beijing is just—that’s the food that made the biggest impression on me.

That’s a good one too! You’re killing me here… People might be surprised to see me eating Velveeta macaroni and cheese out of the box. Velveeta Shells and Cheese.

Oh bacon is totally awesome! Absolutely. I do think it’s overused, but that doesn’t detract from how awesome it is.