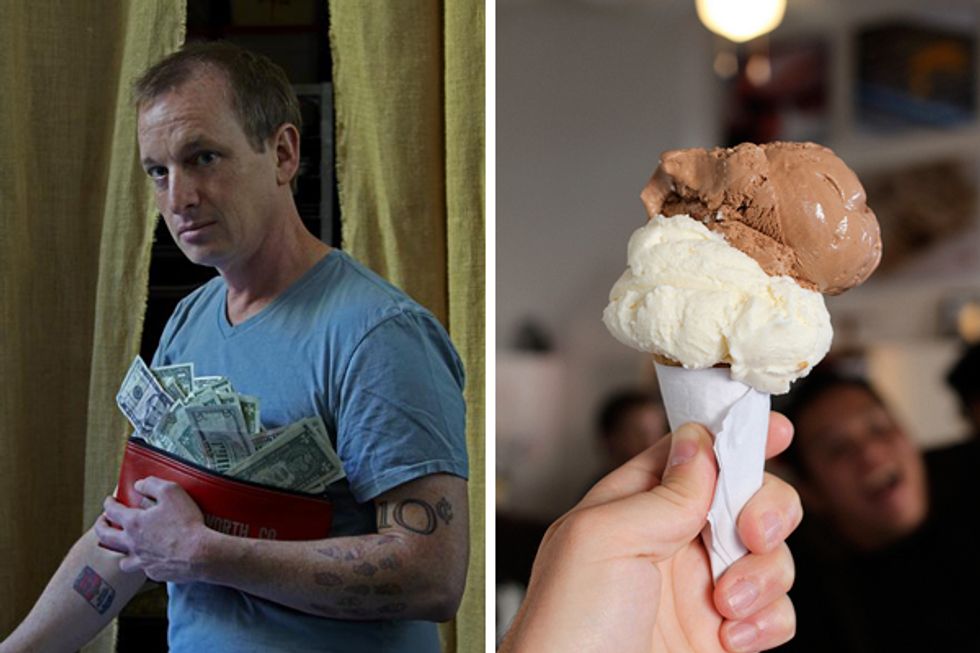 Hero to those who prefer their humor deadpan, their tweets dirty, and their breakfast boozy, Jake Godby is the culinary half of the duo behind San Francisco’s idiosyncratic—and, five years in—now iconic Humphry Slocombe ice cream shop. Along with biz partner Sean Vahey, Godby’s churned out a rotating roster of unorthodox flavors (theirs was perhaps the only ice cream shop in the state affected by the foie gras ban), and the two will soon open a second location in the Ferry Building. Here, Godby talks Goldfish crackers, Manhattans, and naked, one-eyed ninjas. (No, that’s not the name of a new flavor… Not yet, anyway.)

If your decision to get into this line of work could be traced to a single food memory, what would it be?

I didn’t know they were going to be hard questions! That’s really hard. I’d say just going to family gatherings and picnics, the idea of everyone bringing something to the table. Just feeding people is really satisfying.

You have a guest at home you want to impress. What’s the go-to meal?

If I’m cooking at home, I have a fallback of roasted shrimp with romesco and potatoes.

Yum. If somebody could only visit Humphry Slocombe once, what should they order?

I guess if they could only come once they should get the Secret Breakfast [made with corn flakes and Jim Beam]. I mean, that’s our signature flavor; in a way, I think it encapsulates everything that we’re about.

What do you think is the best—or your favorite—dining experience in the bay area?

Can I say two? My neighborhood go-to restaurant has been Delfina for years and years and years, because I think it’s just a fantastic restaurant and says a lot about modern eating in San Francisco. My other is the Ramp. It’s outdoors, it’s on the water, the food’s just okay, but it’s just a great place to go for lunch and feel like you’re just—there aren’t very many places in San Francisco where you can eat on the water without going to Fisherman’s Wharf.

True story. What is the most outrageous thing that has ever gone down here?

We had a one-eyed ninja peeing on the bathroom floor that someone walked in on.

A one-eyed, naked ninja. During Carnival.

That’s magical! Okay, moving on. Let’s say you killed Sean and you’re on death row. What is your final meal?

My final meal, how about cold pizza.

In my life, or in the shop?

And what about in the shop?

What is your favorite food city?

I’m gonna say Portland right now. Pigeon is fantastic… I mean, it’s between New York and Portland, but in Portland you can get fantastic food for a fraction of the cost.

And finally: bacon. Is it awesome or is it overrated?

Can it be both? I mean, there’s a place for it, but I think it’s gone a little too far at this point. I think people should be a little bit more judicious in their use of it. Like I don’t think there’s any reason to put bacon in a Manhattan, for example. Or coffee.

Agree. Some things are sacred.