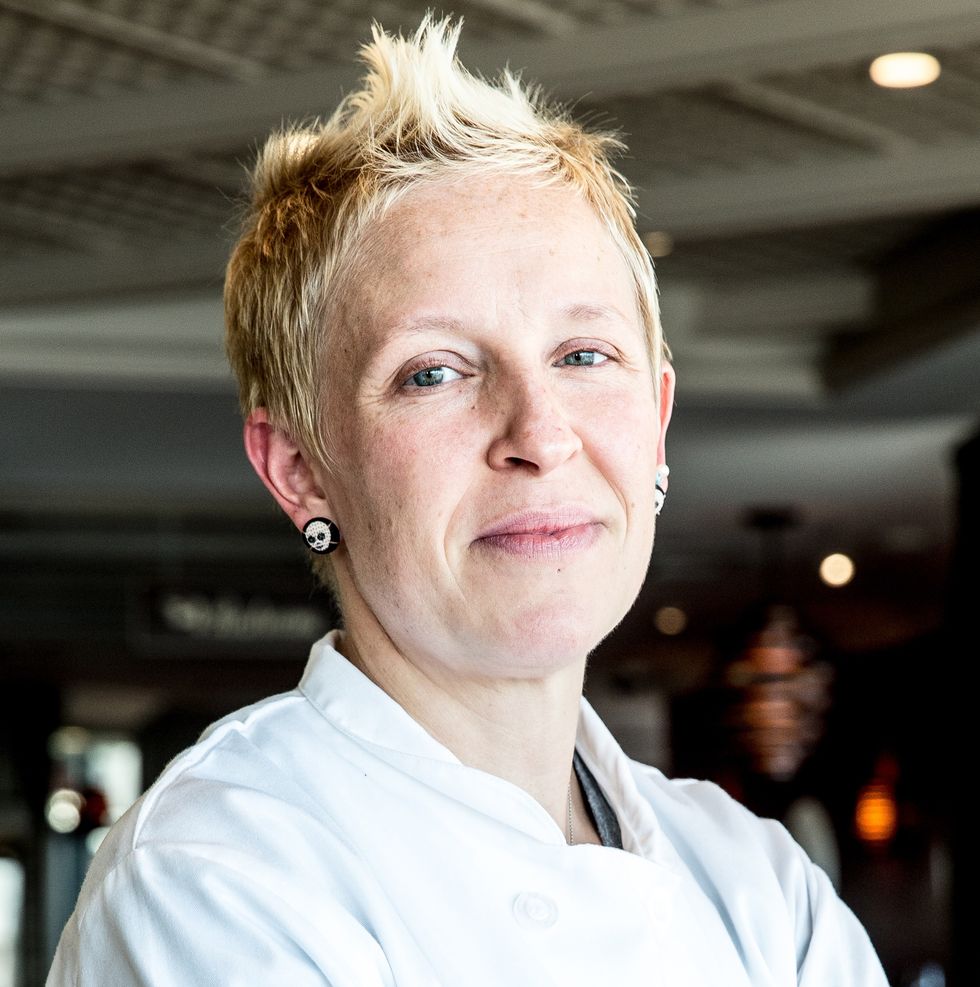 Oakland’s Tribune Tavern, which Chris Pastena (Chop Bar) and Temoor Noor (Grand Tavern) opened last spring in the storied Tribune Tower, has a brand new chef, imported all the way from, like, right around the corner. Tracey Belock, who most recently cheffed at Disco Volante, also did time in the city working as head baker and pasta maker at Quince, and sous chef at Farralon. Though she’s only been in the Trib Tav’s kitchen since November, Belock’s already peppering the upscale-pub-grub menu with her modern, seasonally-inspired interpretations of old standards. (See: the new scotch egg. By which I mean: Eat the new scotch egg.)

It’s not really a particular food, I was going to art school and I was cooking to pay for college and then I realized that I was the fastest fry cook in town, so I thought that this is definitely my destiny.

You have a guest at home that you want to impress. What’s the go-to meal?

That’s a tough one – don’t want to be too cheffy. I think I would do rice congee, with all the traditional accoutrements done more of an American way, that’s what I do a lot and everybody loves it, with fried chicken skin and celery leaves.

If somebody could only eat here one time, what should they order?

I’d say the new scotch egg. With a nice runny yolk, and fennel sausage, deep-fried so it’s crispy on the outside with housemade spicy jalapeno pickles; definitely the scotch egg.

Yum. What do you think is the best dining experience to be had in the Bay Area, other than here?

I used to work for Michael Tusk, and I have to say that all of my best meals have always been at both of his restaurants. The old Quince was my favorite but I love the new Quince, and Cotogna, so definitely anywhere Michael Tusk will cook.

This might be hard given that you’re kinda new, but what’s the most outrageous thing that’s ever gone down here?

I haven’t seen a lot of outrageous things here, things have been faaaaairly smooth. This is downtown Oakland and I haven’t seen any trouble yet! I’ve seen a lot of rowdy guests for sure. On New Years Eve, we had three people on the line firing like a hundred dishes at one time, so busy!

You kill your sommelier and you’re on death row. Final meal?

My final meal would be my mom’s chicken soup for sure.

Yep. I eat it about five nights a week.

Really comforting! One ingredient you can’t live without?

Off the top of my head I would say salt but it’s probably boring, ummm, chicken fat!

Probably in Italy, in Alba, or Le Marche, that was where my husband and I spent a lot of time, we have some friends who we met along the way traveling that have a restaurant there that was so outrageous, unreal. What seemed like a gas station I would say had some of the best pasta I’ve ever had in my life. Definitely Le Marche!

My final question has to do with bacon. Is it awesome, or is it overrated?

Undoubtedly awesome, no question. It’s hard not to use it on every item.

Know a chef who's ready for their 15 Minutes? Tweet  @Shannon_BKelley