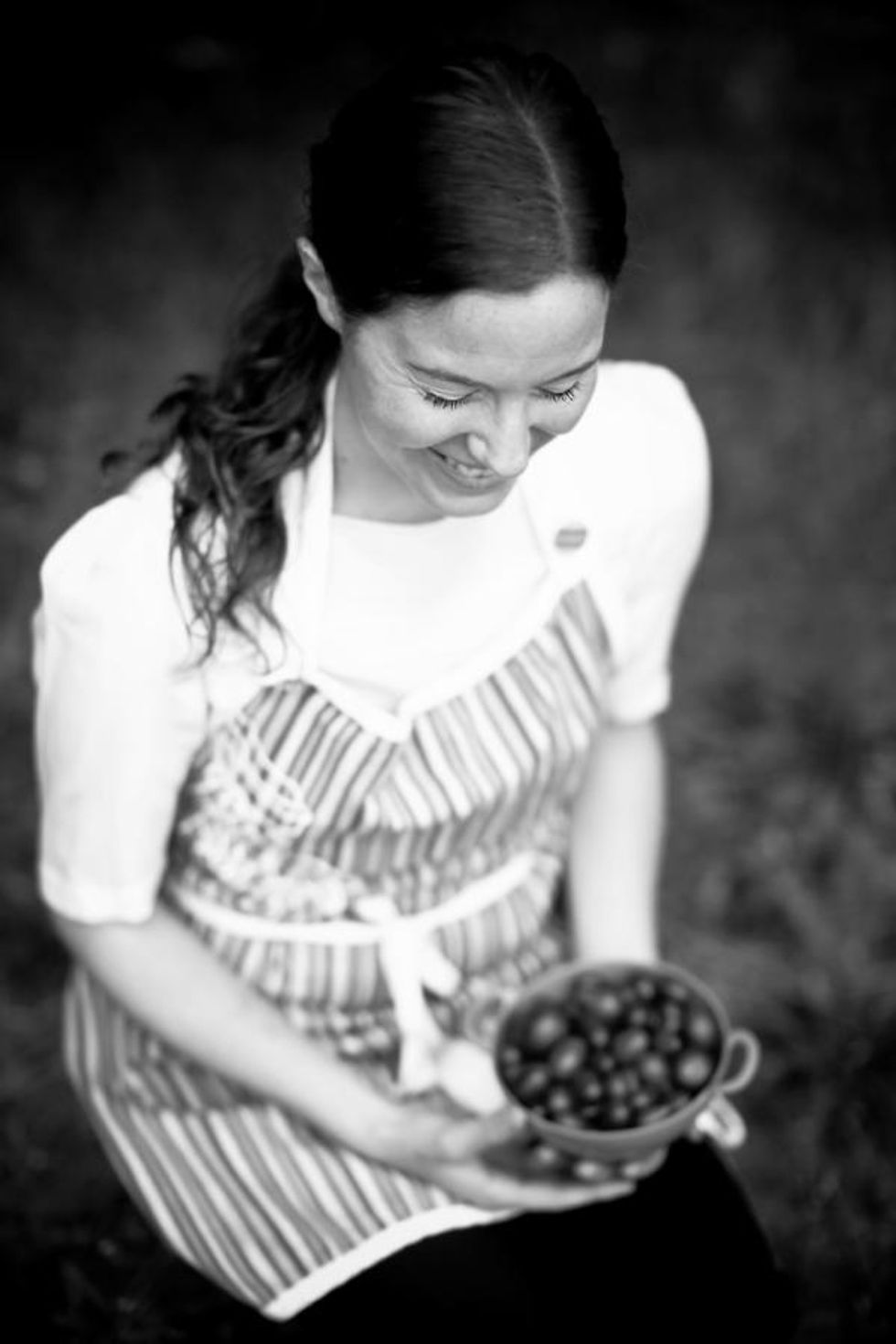 After ten years cooking at Zuni Café, Rebecca Boice, executive chef of Oakland’s Toast Kitchen + Bar, is still getting comfortable with the “exec” part of her title (food notwithstanding). But the past year has seen Boice growing into the role, just as Toast is growing into it’s newly expanded Rockridge digs (note the amazing lighting in the dining room -- a regular, who is also an artist, took 99 used bottles from Toast's bar to make the striking cascading fixture), new kitchen, and increasingly impressive rep, but her attitude remains as refreshing as her grub.

Here, we talk spaghetti, bourbon, ignorance-as-bliss, and the ideal marital division of labor. All over some exceptionally loud classic rock.

I don’t know if it’s one memory; we’re all kind of the sum of our experiences. Mine were my mom cooking dinner every night, me hanging over the back of the chair, watching her. Being allowed to stir the sauce was a big deal… So probably—if anything—making spaghetti sauce. Knowing how to make that gave me confidence to apply for my first job at Emmy’s Spaghetti Shack. Just knowing how to make that one dish felt like okay, I can do that, I can probably figure out the rest…

My mom always made her own sauce too. Okay, next: there’s a guest at home you want to impress, what’s the go-to meal?

I try to keep it as simple as possible so I can enjoy the company. We have a pretty nice backyard, so we’d probably fire up the grill; my husband got me a cool cast-iron pan for the grill. We’ve done squid in the pan, pardon peppers, we have tomatoes growing right now, so probably throw some tomatoes in. Just make sure there’s lots of good wine and beer; bourbon for later!

If somebody could only eat at Toast once, what should they order?

The menu changes so often, it’s hard to pick one thing. I really love our soups—it’s a simple thing that when done well is so nice; it’s not something that’s necessarily the signature dish of a restaurant, but we have fun with different flavors and garnishes. People like the meatballs a lot, and they’re always on the menu. Try it all!

What do you think is the best dining experience in the Bay Area, other than here?

I really enjoyed the dinner I had at Miss Ollie’s the other night. I’m partial to Sarah [Kirnon]’s cooking, but she had this awesome fried chicken, this pork braised with beans, and all these fun little pickled vegetables and it was just sooo—that’s what I want to eat! And not fussy. I work in a restaurant; to then go to fussy dining experiences is like you’re at work still. It’s part of the experience that you have to be engaged, so I definitely like the less formal places where you just get to have some really good food and drinks. To me that’s the best, to relax and enjoy it and appreciate someone else’s hard work! Because you know what goes into it.

Nothing that outrageous has happened here. Thankfully.

You kill your sommelier and you’re on death row. Final meal?

Probably the cheeseburger from Hopscotch, with all the fixins; some duck fat-fried potato chips.

Salt and olive oil, two, but they’re kind of the foundation of everything. I’m a sucker for tomatoes. They’re versatile: they’re great on their own, but they also could be the foundation for a lot of other really great things.

What kind are you growing?

Cherokees are the best!

That seems to be the plant that’s struggling the most. It’s allowing me to see on a very small scale what I imagine farmers do every day, seeing the little microclimates within our garden, the tomatoes that get the early morning sun versus the ones that get the late afternoon sun… My husband’s the one with the green thumb, I’m more—okay, it’s ready! Harvest that now!

I’m partial to Oakland and San Francisco, but I’ve had lots of really good dining experiences in Portland. I had a fantastic meal at Beast the last time we were there. There’s two seatings at two big tables. Everyone’s served at once; the kitchen decides when it’s time for soup, when it’s time for salad. Just watching the choreography of it... the sheer organization of the place... and the food—everything was spot-on.

Nice. Fill in the blank. People might be surprised to see me eating ___.

It’s awesome in small doses. It’s good as a garnish and a side note, but you know, too much of a good thing is a true statement.

Know someone who's ready for their 15 Minutes? Tweet Shannon at @Shannon_BKelley.