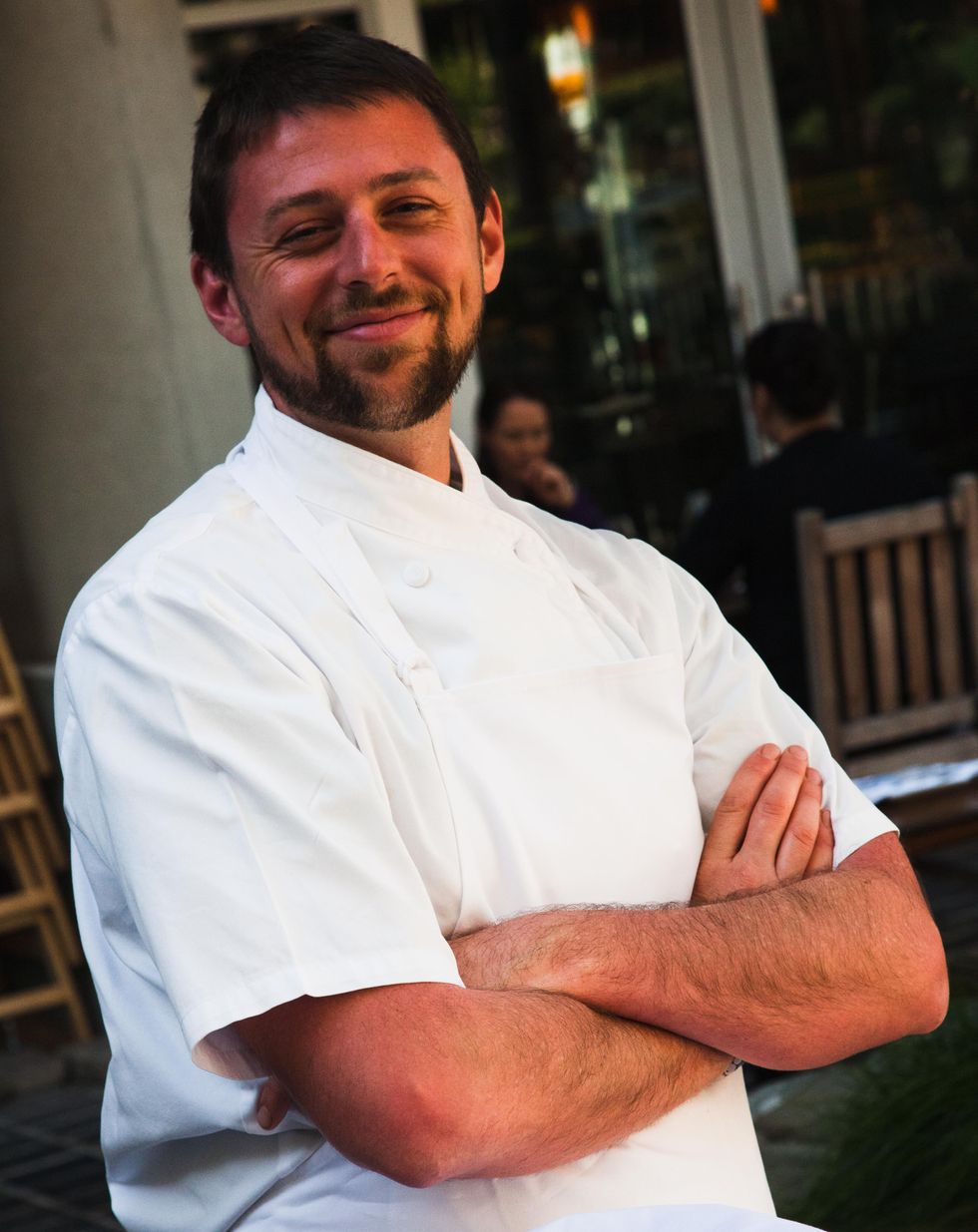 At Russian Hill’s month-old Verbena, Chef Sean Baker is bringing his equal-opportunity culinary skills to the 7x7. His other resto, which, like Verbena, is a venture from baker and owners Ari Derfel and Eric Fenster, is Berkeley’s Gather. With a background that includes stints at vegan restaurant Millenium as well as Santa Cruz’s Gabriella Café—where he focused on cooking with the whole animal and charcuterie—it’s little surprise that Baker’s developing a rep as the rare chef whose menus can be counted on to please vegans and carnivores alike. At Verbena, Baker continues to demonstrate equal respect for flora and fauna, highlighting the best local ingredients and heritage meats, prepared with serious technique, in plates meant for sharing.

Oh, Jesus. Lemme think… I think it’d be down in El Centro California; my parents—we traveled a lot, you know, and it was this Mexican food restaurant and it was just incredible, the smell; I still remember it and I still think about it. It doesn’t exist anymore, but it was a nice restaurant; they’d braise their own beef barbacoa and you could smell the barbacoa throughout the restaurant, but the clincher was the flour tortillas—they were incredible; they’d grill them in the back and you could smell the toasted flour and the toasted corn and the combination of the two was one of those things like ohmygod, I don’t think life can get better than that. You know what I mean? That was a moment of like, holy shit, food is really, really powerful.

I like it. Next up: You have a guest at home that you want to impress, what’s the go-to meal?

Honestly probably oysters. I really enjoy oysters, but that’s probably not a good answer. But just like shuck some really good oysters and a really nice bottle of wine.

Nothing wrong with that! So if somebody could only eat here once, what should they order?

Yeahhhh, it’s one of those that looks so simple on the plate but, you know, it costs a lot of money and a lot of work to make, and it’s just delicious.

Next up: What do you think is the best dining experience to be had in the Bay Area, other than here?

I like Zuni Café a lot… It’s such an open-ended question because if you’re just talking about casual nights out, it’s Zuni, but like I had a really amazing meal at Meadowood; on a special occasion it’d be somewhere like Meadowood, or I had a really wonderful dinner at Saison, you know, so it depends, but I still like Zuni a lot.

Are you a roast chicken guy?

What's the most outrageous thing that has ever gone down here, or any of the restaurants you’ve worked?

Oh, I’ve heard some bad ones! Moving on. You kill your sommelier and you’re on death row, what is your final meal? …And why do I have this feeling you’re going to say oysters?

No. It’s probably tacos.Or I really love perfect refried beans and cheese together, so it could be a bean and cheese burrito.

Sounds good to me. Okay, speed round: One ingredient you could not live without?

Ha! Sure thing. And finally: bacon. Awesome, or overrated?

Well, I mean, it can be a crutch. It’s not overrated, bacon’s great, but people rely on it… It can be overused, you know?