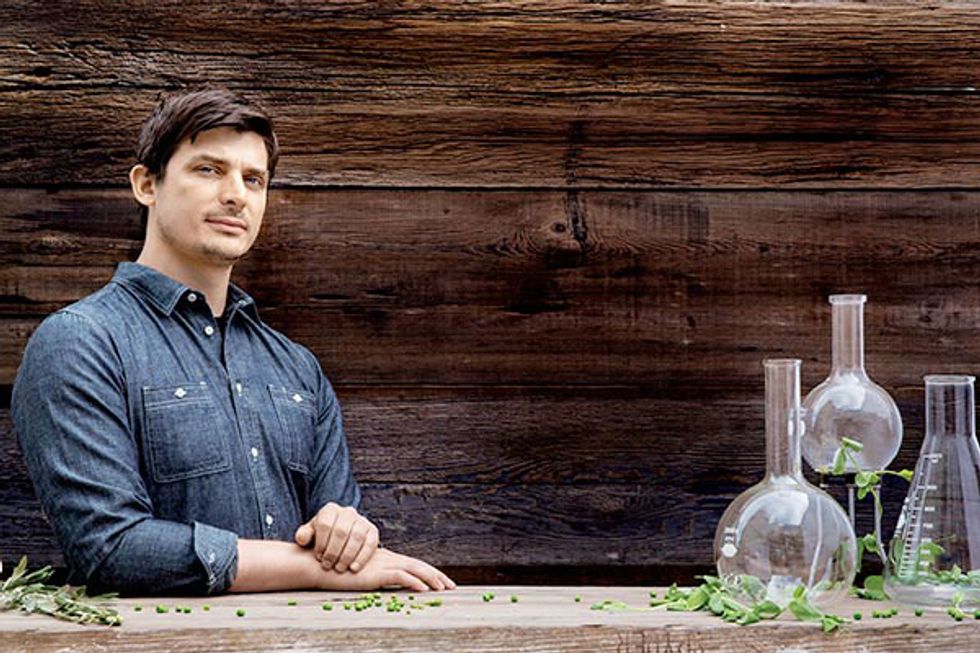 Think mayonnaise can’t be interesting? Think again. Josh Tetrick, the charismatic cofounder of Hampton Creek, a trailblazing start-up devoted to edible tech, will make you believe that mayonnaise could change the world. The Fulbright scholar and former college football player is on a crusade to create delicious food that’s healthy, good for the environment, and also affordable.

It all began as a quest for cultivars to replace eggs—which are at risk of salmonella contamination and have notorious impacts on the environment (getting one egg to market requires 53 gallons of water and 0.346 square miles of land, and it involves the emission of 97.5 grams of CO2). Since then, Hampton Creek’s team of scientists, chefs, and engineers have tested more than 4,500 plant species to arrive at 14 plant-based food substitutes. Among them are Canadian yellow pea, used in the mayo, and sorghum (a feed grain similar to oats) for the cookies, both of which mimic the qualities of eggs. But the real game changer? These egg alternatives are good for the bottom line. An 18 percent savings to food manufacturers means more money in consumers’ wallets.

“Generally speaking, our food supplies are fucked up,” says Tetrick. “We have to figure out how to make it better for everyone, so it’s not difficult for regular folks to do the right thing.” Take, for example, Tetrick’s own dad, a die-hard McDonald’s junkie. “The best way to deal with my father is to make the food that he already eats really delicious, cheap, and
a little better for him and for the planet.”

Hampton Creek’s ingredients already are major components of the products of one of the largest food companies, and Tetrick is working overtime to get fast food companies on board. (“We’re in talks with a number of them, some of the biggest.”) Early next year, look for the launch of Just Scramble, a 40 percent more affordable plant-based product that scrambles in a pan just like eggs do, but with 30 percent more protein and zero cholesterol. Can you smell an eggless McMuffin?

Now that he’s tackled huevos, Tetrick and his team hope to replace conventional sugar cane, food dyes, and more. “We try to stay focused on what the world would look like if better food were easier, healthier, and more affordable for people. And then do it. We call it the better space.” For now, watch for the brand’s 90,000-square-foot, Gensler-designed headquarters, with a lab, product testing facilities, a communal workspace, and a pilot plant program, to rise in the Mission this fall.

JT: The Plant at SFO’s Virgin terminal. “There’s something about flying...I feel like I’m exposed to a lot of shitty food, and The Plant is just really wholesome.

SB: Who would you nominate for Hot 20?