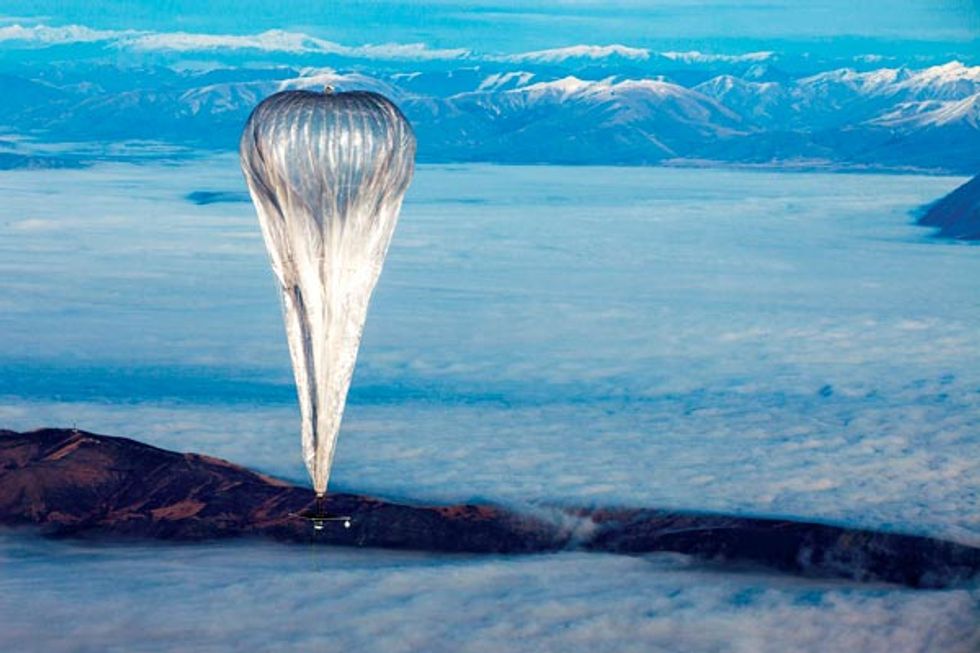 7x7 Magazine's annual Best of SF showcases all you could ever hope to eat, drink, see, buy, know, and do in the city. Here is the Best of Tech:

A (nearly) out-of-this-world idea, Google’s Project Loon aims to increase connectivity through a series of custom-designed balloons that circumnavigate the globe, float along the stratospheric winds, and beam the Internet down to Earth along the 40th southern parallel. After an initial test run in New Zealand, the tech giant has recently expanded testing to the Nevada desert and reportedly plans on launching 300 balloons within the next year.

Dropping the first Thursday of every month, Autodesk opens its gallery at One Market for an evening of talks by industry leaders and interactive exhibits of fashion, art, and robots—complete with cocktails and bites for the maker crowd. It’s the Paris salon updated for the 21st century, and at only $25 per ticket, it’s consistently sold out.

Imagine a world where you no longer even have to touch your devices to get a response. The Ring, from Silicon Valley–based Logbar (demoed at MacWorld this year), brings us one step closer. Inside the silver ring (yes, it’s wearable jewelry) are electronics that allow you to interact with and control apps, smart watches, phones, and other devices via Wi-Fi and Bluetooth, using customizable finger gestures. The first models release in July.

From your finger to your wrist, tech is beginning to find its place as a fashionable (and functional) accessory. Pebble’s Smart Watch connects to your smartphone, allowing you to receive and screen incoming text messages, voicemails, and emails. You can interact with more than 1,000 apps (and counting) for both iOS and Android, and the Palo Alto company’s multiple styles are slim and attractive. No bulky wrist robots here.

An education rich in STEM (science, technology, engineering, and math) is all the rage as tech companies cast their sights on employees of the future. SF-based RobotsLAB won best education application at SXSW this year for its clever robot kit for the classroom—the hands-on bots roll, shape-shift, and fly. The day will come when every young learner has a personal robot.

The latest venture from Twitter cofounder Biz Stone is an app that crowdsources answers to your burning questions. The name of the app is a reference to the tentacles of a jellyfish. Users upload a question (“Liverpool Lil’s was closed yesterday. Is it open today?,” “Do you have Amazon Fire TV? Is it great?,” “Can you get a better burrito in San Francisco? I don’t think so!”) and an accompanying image, and the community—culled from the hive mind of your personal social networks—delivers the answers.

Lytro shook up the digital camera world with its quirky light field cameras—nifty handheld tubes that allowed you to adjust the focus and depth of field after the picture was taken. The Mountain View–based outfit’s next-gen Illum, which mimics the appearance of a more traditional DSLR camera body, takes its tech to the next level with an 8X (30–250mm) zoom lens, in-camera 3-D metering components, and an upped range of capture at 40 million light rays (the original model’s was only a “measly” 11 million). Get ready for your close-up.

Parking in the city can be a major drag, but technology is coming to the rescue. MetroMile, an in-car monitoring device that works in tandem with your phone, comes equipped with a tracker that helps you remember where you parked, and an auto-alert feature that sends you street-sweeping alerts. If you do get a ticket, the Fixed app starts the red-tape unrolling—just take a pic of your ticket, and the Fixed team handles the rest.

Apple takes its iOS one step further with CarPlay, a vehicle version of the popular operating system. Its digital concierge, Siri, can now take voice commands to patch in calls, play voice mails, and take dictation of emails and text messages. The interface also allows you to map your route and play music through a variety of services, such as Spotify and iHeartRadio. The first versions will appear in a range of luxury car lines starting later this year.

At Your Service: Apps That Deliver

We’re on the verge of that drones-at-your-door moment: SHYP takes the frustration out of sending packages of any size. Upload a pic of your item, and soon thereafter a rep shows up to handle the packaging, shipping, and delivery. Washio makes laundry day a breeze with its scheduled pick-up and drop-off dry cleaning and laundry service. And when you need to send (or receive) flowers, turn to BloomThat, a SoMa startup that offers a daily menu of floral arrangements to be delivered in 90 minutes almost anywhere in the Bay Area.