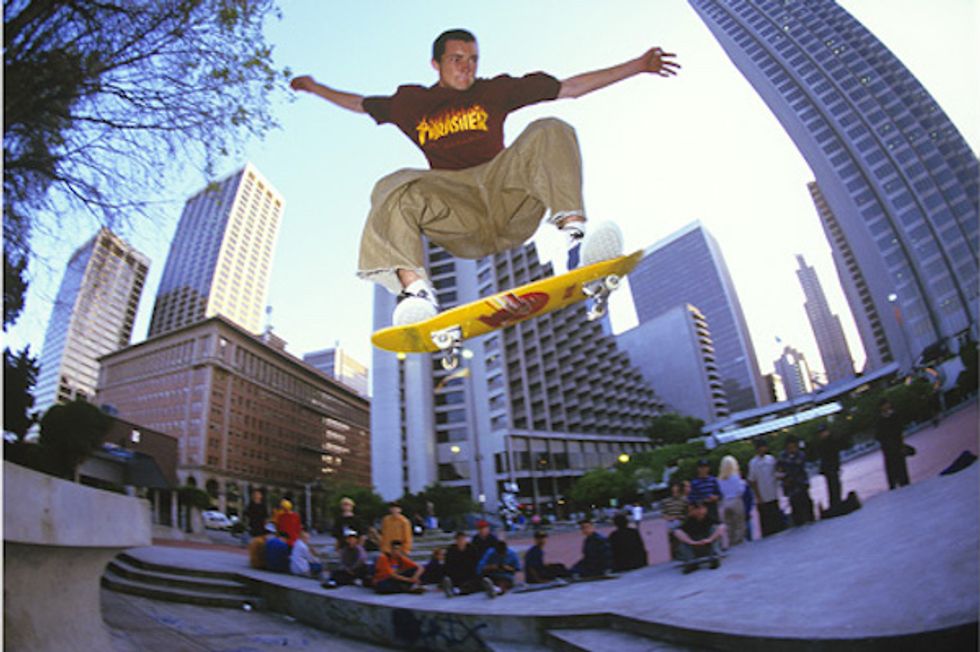 As skateboarding’s popularity skyrocketed in the early 1990s, San Francisco became a hub for the sport’s progression and popularity and, in turn, home to some of the country's most iconic skate spots.

Many famous professional skaters, including Zero Skateboards founder Jamie Thomas (aka The Chief), began their careers by skating in the Bay Area. Over the years, some of our historic skate spots have been demolished, but three remain top of mind for diehard skaters who geek out on the history of the sport.

(This clip from skater zine Chrome Ball Incident called Justin Herman Plaza a "Mecca for throngs of skaters" and called out its 12 most popular sites for skating. Photo via theridechannel.com)

In the early 1990s, the Embarcadero's Justin Herman Plaza became ground zero for international skaterboarders. What now appears to be a corporate art relic of another era, the plaza's sculptural hardscape, built in 1972, appealed to skaters for its set of challenges presented by various stairs, ledges, and a curved retaining wall known to skaterboarders as the Wave.

Called EMB by skaters, this swath of the Embarcadero is "one of the most storied spots in skateboarding," according to the Ride Channel. It became an epicenter in the late 1980s and early '90s when pro skaters including James Kelch, Mark Gonzales and Mike Carroll began capturing their groundbreaking tricks on video here—Gonzales famously minted The Gonz Gap when he landed an ollie, and a few years later a kickflip, over a massive gap in the hardscape. Soon afterward, "an elite selection of up-and-coming pros and amateurs began to rise to the new challenge," writes Joel Rice for ESPN. Among them was Jeremy Wray, "one of the greatest gap skaters of all time."

"The Gonz was definitely one of the gaps that stands out," says Wray. "If you got something down that, it meant something."

During EMB's heyday, you could have seen nearly 100 skaters per day getting in on the action, and the spot has long been a darling of skater magazines and videos. Watch some of the pros skate the EMB back in the day in this video essay from Cvlt Nation.  //  Justin Herman Plaza, 1 Market St. (Embarcadero)

(The 3rd and Army skate spot; courtesy of Skate All Cities)

This industrial patch of concrete overlooking Islais Creek was built in 1988 as part of the SF Bay Conservation and Development Commission's Bayview Gateway Beautification Project. And according to GrindTV, while it was never intended to be used for skating, Friends of Islais Creek founder Julia Viera let skaters use the plaza so long as they didn't tag and didn't leave a mess—unlike many other spots in the city, skateboarding at 3rd and Army was never criminalized, so skaters have been free to ride here without fear of getting busted.

3rd and Army, which is actually located at the intersection of Cesar Chavez and Indiana Streets, is said to have been discovered by pro skater and Daly City native Mike Carroll, who supposedly spotted it from the freeway. "Legend also has it that Mike was the first to kickflip the rock gap" here, says GrindTV.

In the early ‘90s, Carroll and Rob Welsh made this open plaza a destination for skaters from across the globe who often brought their own obstacles to combine with the park’s own ledges, benches, and gaps. But skaters take heed: Should you choose to ride here and accidently lose your board in the water, leave it be—the water is known among skaters to be toxic.  //  3rd and Army Plaza, Cesar Chavez St. at Indiana St. (Bayview)

(Hubba Hideout, seen here on the cover of Skateboarding's 1989 photo annual, is so iconic that its name, hubba, has been co-opted by skaters to mean refer to any ledge going down stairs. Photo via complex.com)

To your average San Franciscan, a stroll past this pair of six stairs on the Embarcadero (near Justin Herman Plaza's EMB), would mean little more than a place to pause and tie your shoes. But for the worldwide skateboarding community, these stairs changed the shape of skating history.

Hubba Hideout—"named for the nefarious denizens that would frequent the skate spot looking for a hidden place to engage in illicit activity...a nod to the Bay Area slang term for crack cocaine, hubbas," writes Adam Salo for ESPN—served as a proving ground for ledge skaters looking to up their game.

The first documented trick was a crooked grind by Wade Speyer in 1989, and the Hideout was featured on the covers of top skate magazines through the mid-90s. To the dismay of the local and international skateboard community, the city erected fences and ripped out the spot’s top ledge making it impossible to skate back in 2011. But Hubba's legacy lives on—the term hubba is used by skaters to refer to any skate-worthy ledge going down a flight of stairs.  //  Hubba Hideout (The Embarcadero)