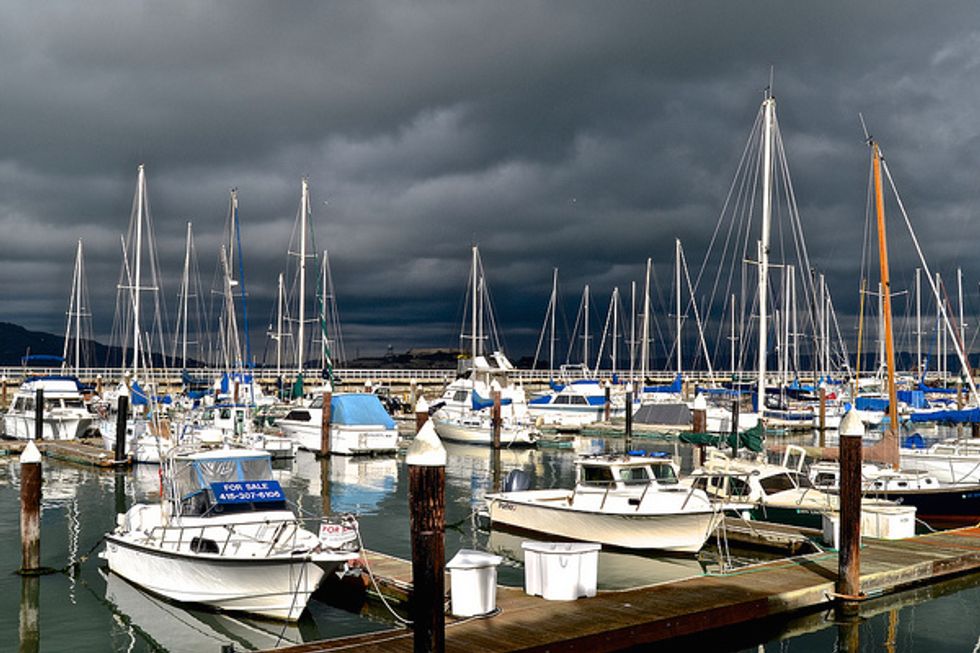 5 Signs That El Niño May Be Coming

Gather ye rain boots and emergency bottled water while ye may. The signs are beginning to point to a serious El Niño this winter. Here's what to watch out for.

So far, El Niño is looking a little weak. But people who know more about weather than the rest of us are predicting that the storm will pick up steam come September and October, and may persist through April or May. The National Oceanic and Atmospheric Association (NOAA) gives El Niño a 90 percent chance of hitting this winter, with an 80 percent chance it’ll stick around for spring.

Is this the drought savior we’ve been waiting for? Maybe, though NOAA isn't making any promises. All we can do is stay on our guard. Here are five things to look out for as weird weather approaches.

As per the whole canary-in-the-coal-mine idiom, animals along the West Coast have been acting fishy lately. Sharks, whales, birds, sea slugs, and fish are moving north toward cooler waters, indicating warming southern waters due to altered El Niño circulation. Given the alarming number of sharks that have been hanging around the SF Bay lately, we’d recommend doing all your large-fish watching on the beach.

Don’t get too excited about the prospect of winter sunbathing—South America will get most of the heat. But temperatures here are expected to rise, about four to five degrees higher than usual. The ocean will be warmer as well: Already it's nearly 10 degrees above average. We'd say "time for a swim!" except for those dang sharks.

Thunderstorms in the Bay

Even though the rare clap of thunder over San Francisco usually makes the natives stop and think "What the heck was that?" thunderstorms are a real possibility, especially with warmer temperatures, increased moisture, and unstable atmospheric conditions. As the Polar Jet Stream (which is usually responsible for California's winter rain) and the Gulf Stream vie for position over NorCal, things could get crazy. But who knows...it’s all up in the air (ha ha).

Rain. Otherwise known as water falling from the sky. Remember that?

In 1997-98, El Niño brought immense rainfall to the Central Valley and Sacramento. A little history repeating could mean rain for the Bay Area, but scientists can't say for certain how high the Gulf Stream will reach. SoCal, at least, is expecting a downpour. Get your rain shoes ready. (We like these.)

In a place that hasn't had rain since, like, before the Mission was gentrified, flooding seems unlikely. But alas, if the aforementioned torrential downpour does occur, the water, when teams with drought-parched dry earth, could easily lead to flash floods. The 1997-98 storm saw majors flooding and mudslides. Get some flood insurance, a big pile of sandbags, and maybe a boat.