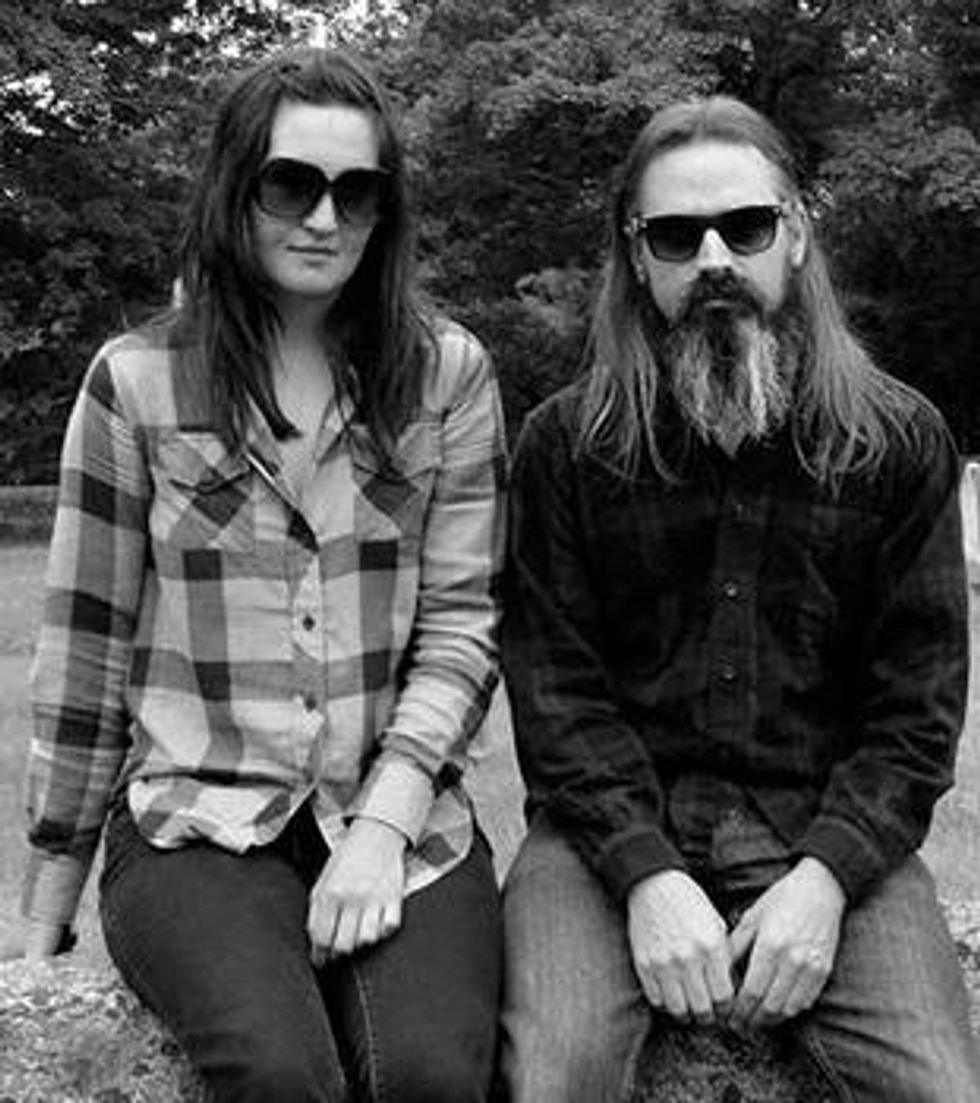 A lot went on musically in the Bay Area this past year--just take a gander at our favorite fresh albums to drop in 2010. That said, it's time to move onto 2011. Here are 7 bands we think are going to make waves in the very near future:

You wouldn't think droning krautrock could have a sexy swagger to it, but somehow Moon Duo nails it. Sanae Yamada and Ripley Johnson (of Wooden Shjips) had quite the 2010, with the splash of their ghostly, mesmerizing debut LP Escape (Woodsist) in April and the ton of shows around the world that followed. In their dense, dreamy jams, Johnson's voice occasionally bubbles out of the fuzzy ether, but the core of the tuneage is the woven-together grind of Johnson's sludgy riffs and Yamada's rock-steady keyboard melodies that push and pull at eachother like flirting lovers. In 2011, look for Moon Duo's second LP Mazes (Sacred Bones) in March, followed by a hefty tour for all of March and April.

This band, still blazing on the heels of their breezy debut EP, Young At Love and Life (Lefse) and a feature on NPR, is poised to wow the unfamiliar during their coming-out performance at Noise Pop 2011. Amidst the moody, cynical and too-serious music flooding the scene right now, Ryan Lynch and Hannah Hunt's earnest synth pop and child-like wonder are positively captivating--just check out their sparky paean to the Giants' World Series title "Finally Champions", or the grown-up perspective on youthful awkwardness in "About My Girls". This is the kind of music that speaks to the unbridled joy that lives in all of us.

Heather Fedewais repping hard for girls in our music scene. She can seemingly play almost any instrument with a ton of attitude to boot. Once the drummer for Oakland's Bare Wires, she now bangs the skins for Lilac, sings/strums/drums for Blasted Canyons, and has taken the lead in Wax Idols, a scrappy quartet that plays blistering, airtight songs in the vein of the Wire or the Fall--just take a listen to barnstormers like "Dead Like You" or "Gold Sneakers". So far, Fedewa's written all of the songs, but the group is feverishly working on new material together for a proper release in 2011. A 7-inch, featuring the excellent "All Too Human", is out in January on Hozac Records, plus a gallery show January 15th at Parklife and more dates to come.

Already a cult favorite, Oakland's Glitter Wizard holds nothing back. Go to one of their shows and your neck will ache for days from headbanging, yet when you see singer Wendy Stonehenge strip down to his rainbow skivvies on stage, you might not know if they're serious or not. But if you stop and listen to their songs, like the wailing "Black Lotus" or "Mirror Man", you'll instantly be reminded of Hawkwind's trippy space rock or Black Sabbath's stoner riffs. Mired in the noise are unironic flutes and saxophones (Jethro Tull, anyone?). It's the kind of music that'll make your neighbors pound on the walls until you turn it down; the kind that makes you nostalgic for your teenage-rebellion phase. Their debut LP drops in 2011, which could just explode their star beyond the West Coast.

First put on the map when they landed their song "Hesitation" in The Social Network, Exray's is a new multi-faceted band whose self-titled LP, set to drop on January 25th, is hard to categorize--and that's exactly what'll keep you listening. Lo-fi pop, grimey garage, art rock. . .they're all swimming around the songs that feature a slew of notable musicians like Nate Query (Decemberists), Tim Cohen (Fresh N' Onlys) and Jason Kick (Maus Haus). Starting off the year in a big way, they'll celebrate their album's release at Cafe Du Nord on February 4th, followed by music videos (one done by an editor at Pixar), a national tour, and a spot at SXSW 2011.

The Soft Moon's spooky self-titled debut just dropped (and made our list of the year's best local albums), and the buzz it's created will undoubtedly bubble over into the New Year. But this one-man band, helmed by multi-instrumentalist Luis Vasquez, would never rest on that success alone. Thanks to his genre-bending disc that artfully enmeshes darkwave with psychedelia, the fate of Vasquez's 2011 is already sealed. He'll tour North America in March and April, jet off to Europe for May and June dates, followed by festival spots in Japan and Australia in July and August. In between all the action, Vasquez still says he'll "unleash a few more singles and music videos". And you thought you were busy!

This Berkeley MC is more prolific than Lil Wayne: the guy's only 21 (been rapping since 16) and has over 1000 tracks to his name, dozens of music videos, 100 Myspace music accounts, a social media empire and has self published a book called Takin' Over. This year, however, made Lil B legit on paper when he signed to Soulja Boy's label Stacks On Deck, with rumors of possibly signing to G-Unit as well. Label wars aside, B's also part of The Pack, a veteran local rap collective which just dropped its second LP, Wolfpack Party, this past August. On the strength of his internet stardom, Wolfpack Party, and his upcoming solo disc Rain In England, he'll likely be the first rapper to put the Bay back on the map in this new decade.